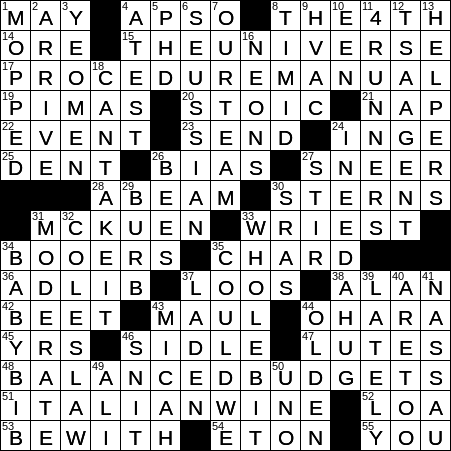 We have a mini-theme today, as May 4th is celebrated by fans of the movie franchise as Star Wars Day:

24 “The Dark at the Top of the Stairs” playwright : INGE

Alan Bean is a former astronaut. Bean was the fourth man to walk on the moon, roaming the moon’s surface with Pete Conrad as part of the Apollo 12 mission. Bean resigned from NASA in 1981 and turned to painting. He is the only artist in the world to have incorporated real moon dust into his works.

John O’Hara was a best-selling novelist whose most successful titles were his first two: “Appointment in Samarra” (1934) and “BUtterfield 8” (1935).

Radley College in Oxfordshire is boys boarding school, one of only four boys-only, boarding-only independent schools in England. The other three schools in the category are the famous Eton College, Harrow School and Winchester College. Radley was founded in 1847. Students at Radley are from ages 13 to 18.

12 Person for whom one removes one’s hat : TSA AGENT

Nassau is the capital of the Bahamas, and used to be called Charles Town. Located on the island of New Providence, the original settlement was burnt to the ground by the Spanish in 1684. It was rebuilt and named Nassau in honor of King William III of England (“William of Orange”), a Dutchman from the House of Orange-Nassau. Nassau is a favored location for the James Bond series of movies. The city and surroundings feature in “Thunderball”, “Never Say Never Again”, “Casino Royale” and “For Your Eyes Only”. Bond portrayer Sean Connery has lived for many years at Lyford Cay, which is just a 30-min drive from the center of Nassau.