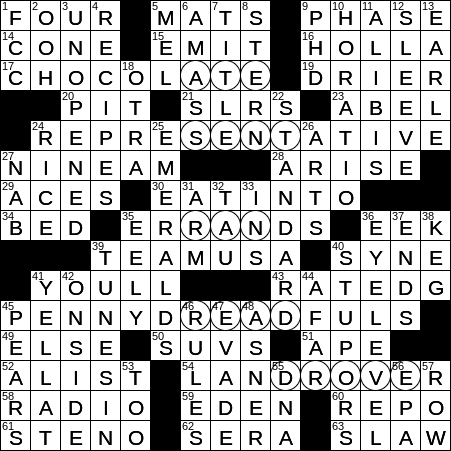 Constructed by: Adam Nicolle
Edited by: Will Shortz

Today’s Theme (according to Bill): What Happened Inside?

Themed answers include a hidden word (circled letters). The hidden word describes what happened to the answer:

17 Candy that the lovers [circled letters] on Valentine’s Day : CHOCOLATE (ate the chocolate)

The term “deadpan”, slang for an impassive expression, comes from “dead” (expressionless) and “pan” (slang for “face”).

21 Some pro cameras, for short : SLRS

24 Politician that the voters [circled letters] to Congress : REPRESENTATIVE (sent the representative)

The US Congress is described “bicameral” in that it is divided into two separate assemblies, namely the Senate and the House of Representatives. The term “bicameral” comes from the prefix “bi-” meaning “two”, and the Latin “camera” meaning “chamber”.

“Penny dreadfuls” originally were cheap works of fiction published in the 1800s in Britain. The books’ price-points were originally a penny, which compared to the shilling that was charged for more mainstream works. Just like America’s dime novels, “penny dreadful” came to be a generic term for trash literature.

51 One step down on the evolutionary scale : APE

54 Luxury vehicle that the motorist [circled letters] on the highway : LAND ROVER (drove the Land Rover)

60 Action to collect on a debt : REPO

63 Dish that may come with a spork : SLAW

9 Queen guitarist Brian May has one in astrophysics : PHD

Brian May is the lead guitarist of the English rock band Queen. As well as performing with the group, May composed some of Queen’s biggest hits, including “We Will Rock You” and “I Want It All”. May is also a qualified astrophysicist. He has a bachelor’s degree in physics and worked several years towards a PhD at Imperial College London before abandoning his studies to pursue his career in music. May went back to his PhD studies some 32 years later, and graduated in 2008.

Horatio is a character in Shakespeare’s “Hamlet”, a friend of the play’s hero and a relatively uninterested party in the intrigue of the storyline. As a trusted friend, Horatio serves as a sounding board for Hamlet, allowing us in the audience to gain more insight into Hamlet’s thinking and character as we listen to the two in conversation. One of Horatio’s more famous lines is spoken right after the title character dies, as Horatio says goodbye to his friend:

Earle Combs was a professional baseball player who played for the New York Yankees from 1924 to 1935, his whole playing career. Combs, a native of Kentucky, had the reputation of being a real gentleman and was nicknamed “the Kentucky Colonel”. He was such a gentleman that he was described as the favorite Yankee by sports writers. That must have been quite an honor given that his teammates included Babe Ruth and Lou Gehrig.

24 Surname of national security advisers under both Bush 43 and Obama : RICE

Susan Rice served as UN Ambassador and then National Security Adviser in the Obama administration.

Gunpowder is the earliest known explosive chemical. Also called “black powder”, it is a mixture of sulfur, charcoal and saltpeter (i.e. potassium nitrate). The saltpeter is a powerful oxidizing agent, providing the oxygen to burn the sulfur and charcoal, which acts as the fuel in the mixture. Gunpowder was invented by the Chinese in 8th century.