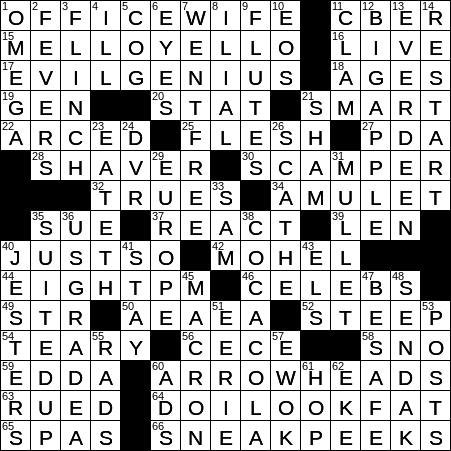 11 One with a handle on the transportation industry? : CB’ER

A CB’er is someone who operates a citizens’ band (CB) radio. In 1945, the FCC set aside certain radio frequencies for the personal use of citizens. The use of the Citizens’ Band increased throughout the seventies as advances in electronics brought down the size of transceivers and their cost. There aren’t many CB radios sold these days though, as they have largely been replaced by cell phones.

Like so many beverages introduced by the Coca-Cola Company, Mello Yello was launched to compete against a successful drink already on the market. Mello Yello first hit the shelves in 1979, and was designed to take market share from Pepsico’s “Mountain Dew”.

A Hail Mary pass (also called “the long bomb”) is a desperation move in American football in which a long pass is thrown with very little chance of success, right at the end of a game or at the end of a half. The term dates back to the thirties, and was probably first used at Notre Dame. The “Hail Mary” is a prayer in the Christian tradition that is of particular significance Roman Catholicism.

27 Kissing in a restaurant or on a bus, for short : PDA

“Shaver” is a slang term for a “fellow”, from the sense of “one who shaves”.

“A Boy Named Sue” is a classic song by Shel Silverstein that was made famous by Johnny Cash. Famously, Cash recorded the song at a live concert he gave in 1969 at San Quentin State Prison.

The Poetic Edda and Prose Edda are two ancient works that are the source for much of Norse mythology. Both Eddas were written in the 13th century in Iceland.

8 Related to the hip : ILIAL

9 Set at a cocktail party : FLUTES

The New York Mets baseball team was founded in 1962 as a replacement for two teams that the city had lost, namely the Brooklyn Dodgers and the New York Giants. For several years the Mets played very poorly, finishing no better than second-to-last in their division. Then along came the “Miracle Mets” (aka “Amazin’ Mets”) who beat the Baltimore Orioles in 1969 to claim the World Series in a huge upset.

Katniss Everdeen is a protagonist in “The Hunger Games” trilogy by Suzanne Collins. The character’s name is taken from the edible plant called katniss. On the big screen, Everdeen is played by actress Jennifer Lawrence.

29 One edition of The Wall Street Journal : EUROPE

48 “Where the Wild Things Are” author : SENDAK

A rad is a unit used to measure radiation levels that is largely obsolete now. The “rad” has been superseded by the “rem”.

61 Problem for an infielder, maybe : HOP