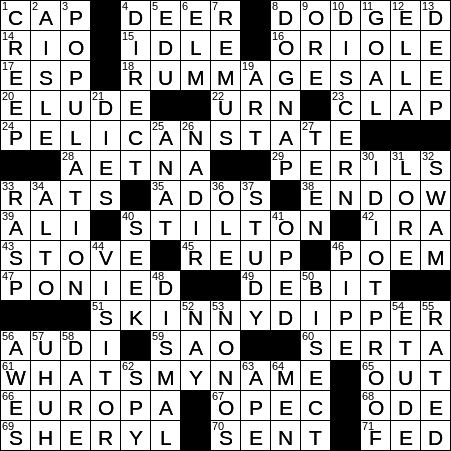 The starting letters of each of today’s themed answers collectively spell out the NAME of the fairy tale character RUM-PEL-STILT-SKIN:

18 Yard event to clear out the attic : RUMMAGE SALE

39 Athlete who said “Silence is golden when you can’t think of a good answer” : ALI

40 Strong-smelling cheese made in England : STILTON

Stilton is a lovely village in Cambridgeshire in England, and is the original home of the delicious blue cheese called Stilton.

42 Investment for the golden yrs. : IRA

46 Work by Wordsworth or Whitman : POEM

49 Ledger entry on the minus side : DEBIT

A ledger is an account book. The term ”ledger” comes from the Middle English “leggen” meaning “to lay”. The original ledger was a large book “laid” in one particular place permanently, an example being a breviary in a church.

66 Mythical beauty who lent her name to a continent : EUROPA

3 China’s is around 1.4 billion : POPULATION

The slippery elm is a species of elm native to North America that is also known as the Red Elm. The inner bark of the slippery elm can used in a medicinal tea. Elm bark tea is said to ease a sore throat or irritated stomach.

7 Co-founder of Rome with Romulus : REMUS

41 Coup for a newspaper freelancer : OP-ED