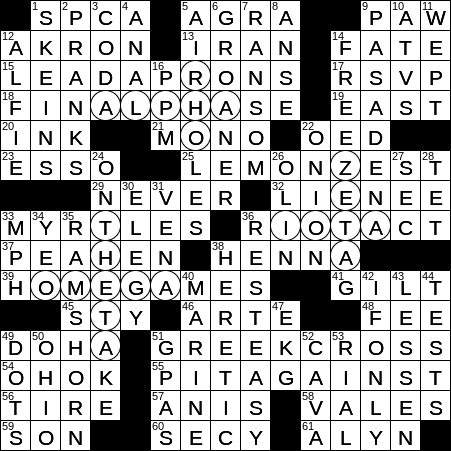 Themed answers contain GREEK letters as hidden words that, in three instances, CROSS each other in the grid:

32 Holder of a collateral loan : LIENEE

37 Fowl with a showy mate : PEAHEN

Anis is a Spanish liqueur, equivalent to what’s called anisette in other countries (in France, for example). It has a licorice taste as it is produced by distilling the seeds of the anis plant. Like all anis-type drinks, it is usually mixed with water and turns a milky white color when the water is added.

Kirk Alyn was the actor who played the title role in the first ever “Superman” movie, way back in 1948. Alyn reprised the role in a 1950 sequel called “Atom Man V. Superman”.

April Fools’ Day is celebrated on April 1st in the Western world. In the US (and Ireland) one can make practical jokes all day long if one wants. But in the UK there is a noon deadline. Anyone pranking after midday is called an “April Fool”.

“As I Lay Dying” is a novel by William Faulkner first published in 1930. The book has an unusual structure, with stream of consciousness writing throughout. There is one whole chapter that I’d like to quote here:

Pasadena, California is famous for hosting the annual Rose Bowl football game, as well as the related Tournament of Roses Parade. The name “Pasadena” was chosen somewhat arbitrarily. A missionary in Michigan supplied a list of translations of the names “Crown of the Valley”, “Key of the Valley” etc, in the Chippewa language when the locals were choosing a name. All of the translations ended in “pasadena” meaning “of the valley”. The word was liked, so it was picked.

The first Rose Parade was staged in 1890 on New Year’s Day in Pasadena, California. The initial parades were organized by the Pasadena Valley Hunt Club, whose members wanted to highlight the mild winter weather in the area. The initial parades did not feature flowers, but these were added to underscore the favorable climate. It was the inclusion of the flowers that gave rise to the name “Tournament of Roses”. The first Rose Bowl football game was played in 1902.

Lena Olin is a Swedish actress, and clearly someone who had acting in her blood. Her mother was the actress Britta Holmberg and her father the actor and director Stig Olin. Olin had a very successful career in Sweden, often working with the great Ingmar Bergman. Olin’s breakthrough international and English-speaking role was playing opposite Daniel Day-Lewis in “The Unbearable Lightness of Being” released in 1988. Way back in 1974, the lovely Miss Olin was crowned Miss Scandinavia in a beauty pageant for Nordic women held in Helsinki, Finland. Olin’s most famous performance was in “Chocolat” released in 2000, and then she won an Emmy in 2003 for Best Supporting Actress in the TV show “Alias”.

33 Letters on a speedometer : MPH

In the US Navy, a yeoman is tasked with administrative and clerical work. In fact, the position of yeoman is the oldest rating in the navy. You’ll also see a lot of yeomen in the background on “Star Trek”.

35 What a shofar is typically made from : RAM’S HORN

A shofar is a musical instrument used in Jewish rituals. It is a relatively simple instrument, made from an animal’s (usually a ram) horn.

An EKG measures the electrical activity in the heart. Back in my homeland of Ireland, an EKG is known as an ECG (for electrocardiogram). We use the German name in the US, Elektrokardiogramm, giving us EKG. Apparently the abbreviation EKG is preferred as ECG might be confused (if poorly handwritten, I guess) with EEG, the abbreviation for an electroencephalogram.

53 Currency on the Arabian Peninsula : RIAL