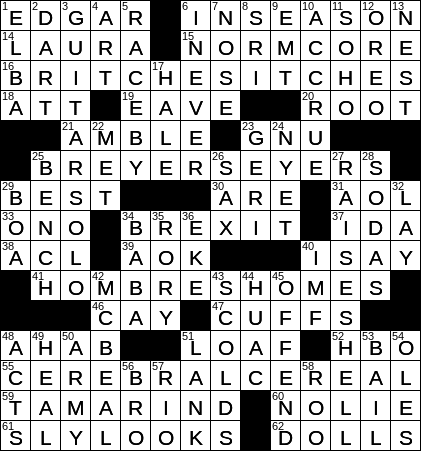 Constructed by: Natan Last, Andy Kravis and the J.A.S.A. Crossword Class
Edited by: Will Shortz

If the letter sequence BR EXITS each of our themed answers, we end up with a repeated word:

“Big Little Lies” is 2017 TV miniseries that is based on a 2014 novel of the same name. It stars Nicole Kidman, Reese Witherspoon and Shailene Woodley as three women who, while dealing with their own emotional problems, find themselves involved in a murder investigation. I haven’t seen this one, but hear very good things …

25 Ones considering which brand of ice cream to buy? : BREYERS EYERS

Sean Lennon is the only child of John Lennon and Yoko Ono, and godson of Elton John. Sean is a musician and composer, and has a band called the Ghost of a Saber Tooth Tiger.

“High Sierra” is a 1941 movie based on a novel by W.R. Burnett. It’s a gangster piece, starring Humphrey Bogart as “Mad Dog” Roy Earle, a bad guy with a heart. Bogie’s love interest is played by the very talented Ida Lupino.

“Guys and Dolls” is a musical with music and lyrics by Frank Loesser. It was first produced on Broadway, in 1950, and ran for 1200 performances. The show was based on a book written by Jo Swerling and Abe Burrows, which book was inspired by the short stories :The Idyll of Miss Sarah Brown” and “Blood Pressure” by Damon Runyon. “Guys and Dolls” was chosen as winner of a Pulitzer in 1951, but the award was cancelled as Abe Burrows was having problems with the House Un-American Activities Committee at the time.

Led Zeppelin was an English rock band founded in 1968. The band’s most famous release has to be the classic “Stairway to Heaven”. Led Zeppelin broke up right after drummer John Bonham was found dead in 1988.

The area of London called Soho had a very poor reputation for most of the 20th century as it was home to the city’s red light district. Soho went through a transformation in recent decades, and has been a very fashionable neighborhood since the 1980s.

“Empty Nest” is a sitcom that aired in the eighties and nineties, and was a spin-off of the hit show “The Golden Girls”. “Empty Nest” is about a pediatrician who is a neighbor of “the golden girls”, a Dr. Harry Weston. Weston is recently widowed and living with two adult daughter who have moved back into his home.

Here’s a famous quote from the movie “Forrest Gump” …

Mama always said life was like a box of chocolates. You never know what you’re gonna get.

Charlie Parker was a jazz saxophonist, who was often just called “Bird” or “Yardbird”. He was a leader in the development of the style of jazz called “bebop”, which gained popularity in the forties. Charlie Parker had a rough life outside of music. He was a heroin addict, and a heavy drinker. When he died, the coroner who performed his autopsy estimated his age as between 50 and 60 years old based on the appearance of his body and condition of his organs. He was actually 34-years-old when he died in a New York City hotel room in 1955.

The song by the Who that is commonly called “Teenage Wasteland” actually has the title “Baba O’Riley”. “Baba O’Riley” is used as the theme song for the television show “CSI: New York”.

“Ally McBeal” is a very successful television show that aired from 1997 to 2002. It starred Calista Flockhart in the title role, playing a successful lawyer. I must admit, I never watched the show, but I am told by a kind blog reader that it’s good viewing. It was created by David E. Kelley, who is also the man behind other successful legal dramas including “The Practice”, “Boston Legal” and “Harry’s Games’. Kelley is married to actress Michelle Pfeiffer.

Duran Duran is a New Wave band from Birmingham in England. Duran Duran’s success was partially driven by some well-received MTV music videos in the 1980s. The band also worked hard on their image and paid a lot of money for very fashionable clothes in which they performed. As a result, one of Duran Duran’s nicknames is “the prettiest boys in rock”.