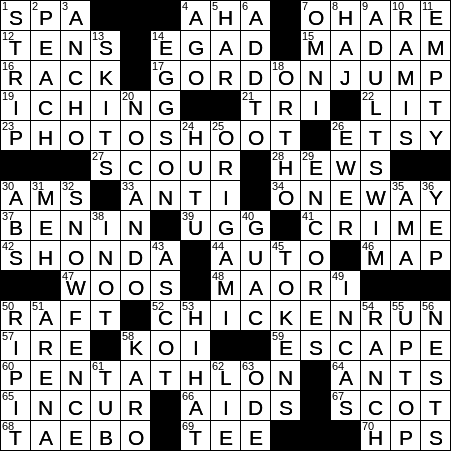 Themed answers end with something that PENTATHLETES do:

7 Airport about 13 miles from the Loop : O’HARE

37 Country between Togo and Nigeria : BENIN

Nigeria is in West Africa, and it takes its name from the Niger River that flows through the country. Nigeria is the most populous country on the continent, with over 180 million inhabitants. It is also the most populous member of the Organization of the Petroleum Exporting Countries (OPEC).

60 Summer Olympics contest whose participants do the ends of the answers to the starred clues : PENTATHLON

70 DeskJet printers and others : HPS

The giant multinational HP (originally “Hewlett-Packard”) was founded in 1939 with an investment of $538 in a one-car garage in Palo Alto, California by Bill Hewlett and Dave Packard. The company name would have been Packard-Hewlett, if Dave Packard had won a coin toss!

The dessert called “cobbler” originated in colonial America when settlers invented it as a substitute for suet pudding as they didn’t have the necessary ingredients to make the more traditional dish. Instead, they stewed fruit and covered it with a layer of uncooked scones or biscuits, creating a surface that resembled a “cobbled” street, hence the name.

Mecca is in the Makkah province of Saudi Arabia. It was the birthplace of Muhammad and is the holiest city in Islam. Every year several million Muslims perform the Hajj, a holy pilgrimage to Mecca.

25 A folder is needed for this : ORIGAMI

Ascot Racecourse is used for thoroughbred horse racing, and is located in the town of Ascot, Berkshire in England. The course is located just six miles from Windsor Castle, and is often visited by members of the royal family. Royal Ascot is the name given to the most famous race meeting in the year, at which members of the royal family attend each day, arriving in horse-drawn carriages amidst great ceremony.

51 Staples Center, for one : ARENA

Karo is a brand of corn syrup. It is an industrially-manufactured sweetener derived from corn.