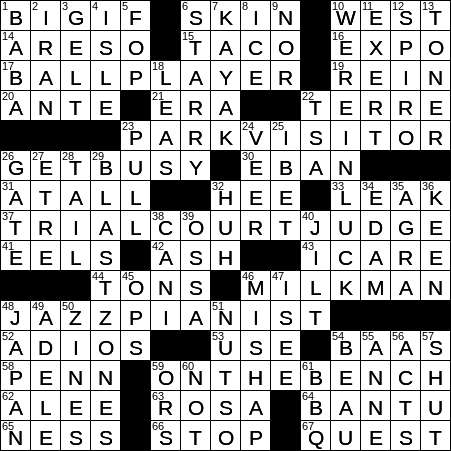 Today’s Reveal Answer: On the Bench

Themed answers are often found ON THE BENCH:

“You Are So Beautiful” is a song written by Dennis Wilson and Billy Preston, first recorded by Preston in 1974. Later the same year, Joe Cocker recorded a slower version of the song that was to become more successful than the original.

Joe Cocker is an English rock and blues singer from Sheffield in the North of England who is noted for his gritty and raspy voice. Cocker has had many hits, several of which are cover versions of songs. Included in the list is “With a Little Help from My Friends”, “Cry Me a River”, “You Are So Beautiful” and “Up Where We Belong”.

15 Mexican entree in a shell : TACO

Bill Clinton was elected Governor of Arkansas in 1978 at the age of 32, making him the youngest governor in the country at the time, and the fourth governor in the history of the US.

Terre Haute, Indiana is a city close to the state’s western border with Illinois. The city is home to a state prison which in turn is home to the state’s death row. The name “Terre Haute” was chosen by French explorers in the 18th century to describe the location, as “terre haute” is French for “high ground”.

46 Tevye’s occupation in “Fiddler on the Roof” : MILKMAN

Herbie Hancock is a jazz pianist from Chicago who was notably a member of Miles Davis’s Second Great Quintet. Hancock started out as a classical pianist, and was considered to be a child prodigy. IN 1952 when he was 11 years old, Hancock played the first movement of Mozart’s Piano Concerto No. 26 with the Chicago Symphony Orchestra.

Chick Corea is an American jazz pianist. Corea is noted for his work in the area of jazz fusion, as well as for his promotion of Scientology.

58 William with a state named after him : PENN

62 Sheltered from the wind : ALEE

2 Land with an ayatollah : IRAN

An ayatollah is a high-ranking cleric in the Muslim faith. The position is roughly equivalent to a bishop or a cardinal in the Roman Catholic tradition, or to a chief rabbi in Judaism.

A dandy is a man who is overly fastidious with regard to his personal appearance. There’s a suggestion that the term originated in Scotland, where “Dandy” is a diminutive of the name “Andrew”. Back in the early 1800s, when the use of “dandy” was at its height, the female equivalent was a dandizette.

55 Youngest of the Brontë sisters : ANNE

Anne was the youngest of the three sisters in the literary Brontë family. Her older sisters wrote novels that are more recognized, but Anne’s two novels do have a following. “Agnes Grey” is based on her own experiences working as a governess. Her other novel, “The Tenant of Wildfell Hall” is written as a long letter from a young man describing the events leading up to his first meeting with his wife-to-be. Anne Brontë’s writing career was cut short in 1849, when she died of pulmonary tuberculosis, at only 29 years of age.