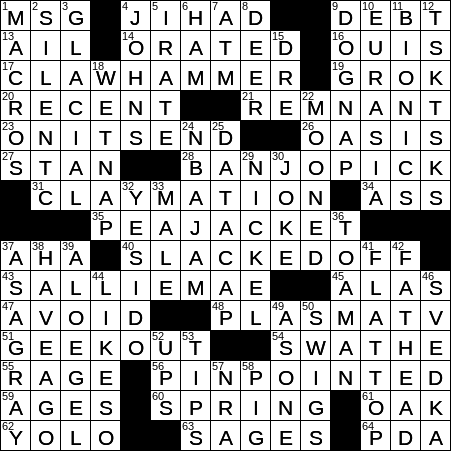 In the Islamic tradition, jihad is a duty, and either an inner spiritual struggle to fulfill religious obligations or an outward physical struggle to defend the faith. Someone engaged in jihad is called a “mujahid” with the plural being “mujahideen”. The term “jihad” translates as “striving, struggle”.

9 Matter of great interest for the United States : DEBT

A remnant is a small part that’s left over from something larger. The term comes from the Latin “remanour” meaning “to remain”. So, a “remnant” is something “remaining”.

23 How a sofa might be turned for moving : ON ITS END

The instrument that we know today as the banjo is a derivative of instruments that were used in Africa.

31 Film models are used in it : CLAYMATION

34 Wearer of a lion’s skin in an Aesop fable : ASS

“The Ass in the Lion’s Skin” is one of “Aesop’s Fables”. In the most common version of the tale, an ass dons the skin of a lion in order to terrify other animals. His plan is successful until he encounters a fox. The fox recognizes the braying sound made by the ass, and so is not fooled. The moral of the story is usually cited as:

Clothes may disguise a fool, but his words will always give him away.

“Sallie Mae” is a nickname for SLM Corporation, created in 1972 by the US government as the Student Loan Marketing Association. By 2004, the government had severed all its ties with Sallie Mae. Today, SLM is basically a profit-focused lender.

55 Word repeated in the Dylan Thomas line “___ against the dying of the light” : RAGE

64 Evidence of a couple’s honeymoon phase, for short : PDA

The letter C (cee) in the word “miscellaneous” is a silent letter C.

6 One playing things for laughs : HAM

8 Start of a letter in the form of a rebus : DEER

Asa Gray was an important American botanist in the nineteenth century. He was a lifelong friend of Charles Darwin, albeit mainly through correspondence. Darwin’s book “Forms of Flowers” was dedicated to Gray.