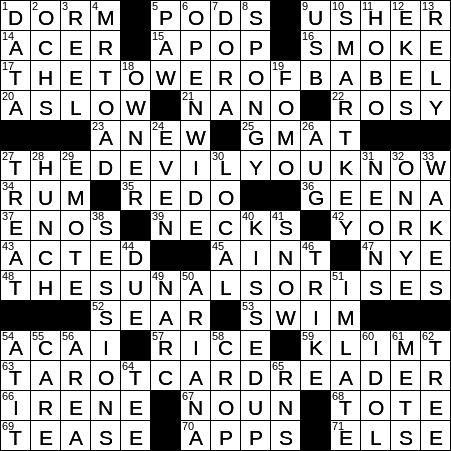 Themed answers each start with a Tarot card:

17 It resulted in human language division, per Genesis : THE TOWER OF BABEL

34 Ingredient in a daiquiri : RUM

36 Actress Davis of “A League of Their Own” : GEENA

Prince Andrew, Duke of York is the third child and second son of Queen Elizabeth II of the UK. Andrew was second in line to the throne when he was born, after his older brother Charles. He is now fourth in line, after Princes Charles, William and Harry. Famously, Andrew was married to Sarah Ferguson for a few years, until a divorce that was much-covered by the media. Infamously, Andrew got himself involved with sex offender Jeffrey Epstein.

The butterfly is the newest swimming stroke used in competition, having been introduced in 1933. It was originally used as a variant of the breaststroke, in an attempt to gain an advantage in speed over swimmers using the traditional breaststroke movement. The butterfly was carved out as a style of its own in 1952, and made its Olympic debut in 1956.

Irene Cara co-wrote and sang the Oscar-winning song “Flashdance… What a Feeling” from the 1983 movie “Flashdance”. Cara also sang the title song for the 1980 movie “Fame”, and indeed played the lead role of student Coco Hernandez.

1 What your phone uses up when you’re not on Wi-Fi : DATA

4 Squire in “The Wind in the Willows” : MR TOAD

19 Anxiety about exclusion, per a modern acronym : FOMO

Our month of July used to be called “Quintilis” in ancient Rome. “Quintilis” is Latin for “fifth”, and it was the fifth month of the year back then. After the assassination of Julius Caesar, the Roman Senate renamed Quintilis to Julius, in his honor, which evolved into our “July”. The month of August, originally called “Sextilis” in Latin, was renamed in honor of Augustus.

32 How Reubens are served, typically : ON RYE

The first letter in the word “three” is a letter T (tee).