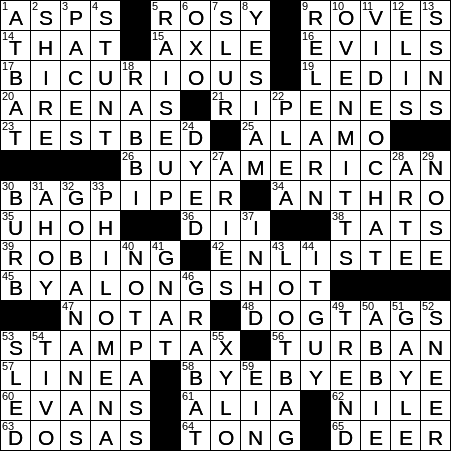 Constructed by: Gabrielle Friedman & Jakob Weisblat
Edited by: Will Shortz

Themed answers each start with a BYE-sound:

21 What the thunk of a watermelon indicates : RIPENESS

The third largest car rental company in recent years is Alamo, which was founded in 1974. Alamo made inroads (pun!) into the market by popularizing the idea of “unlimited mileage”.

Bagpipes have been played for centuries all across Europe, in parts of Asia and North Africa, and in the Persian Gulf. However, the most famous versions of the instrument today are the Scottish Great Highland bagpipe and the Irish uilleann pipes, my personal favorite (I’m biased). The bag in the Scottish version is inflated by blowing into it, whereas the Irish version uses a bellows under the arm.

47 Feature of e-cigarettes : NO TAR

The identification tags worn by soldiers are often called “dog tags”, simply because they do resemble tags worn by dogs. US military personnel are required to wear dog tags when in the field. Each soldier wears either two tags or a special tag that breaks easily into two identical pieces. The idea is that if a soldier is killed then one half can be removed for notification and the remaining half stays with the body. Each tag contains basics such as name and ID number, medical information like blood type, and possibly a religious preference.

53 Colonial grievance that was a cause of the Revolutionary War : STAMP TAX

A “stamp act” is a law requiring that taxes be paid when certain documents are “stamped” to make them legal. Such taxes are known as “stamp duty”. The infamous Stamp Act of 1765 was a tax imposed by Britain on the American colonies. The colonies famously rejected the Act declaring “No Taxation without Representation”, and the disagreement became a significant factor in the decision to declare independence.

“Bye Bye Bye” is a 2000 hit song recorded by the boy band NSYNC. It was originally written another boy band, the English group 5ive, but they passed on it.

Bob Evans is a restaurant chain that started out in 1946 with a truck stop diner located near Bob Evans Farm in Rio Grande, Ohio.

64 Half of a salad bar implement : TONG

The word “shire” comes from the Old English “scir” meaning “administrative district”. The term was replaced with county as far back as the 14th century, but the usage persists to this day, largely because some counties retain the use of “-shire” as a suffix (Yorkshire, Lancashire etc.).

4 Many a “Jackass” segment : STUNT

“Jackass” is a reality show that originally aired on MTV from 2000 to 2001. The show features a group of men doing stunts in which they usually get injured to some extent. The leader of the group is called Johnny Knoxville, who appears in the stunts and who also created the show. Not my cup of tea …

Snoopy is a central and much-loved character in the Charles M. Schulz comic strip “Peanuts”. He is Charlie Brown’s pet beagle, and first appeared in “Peanuts” just two days after the strip’s debut in 1950. He was identified as “Snoopy” a month later, and first “spoke” (in a thought balloon) in 1952. Initially depicted as a more traditionally dog-like figure, Schulz started to anthropomorphize Snoopy in 1952, first drawing him upright on his hind legs in 1952, while ice-skating on a frozen lake.

43 Item with a dollar sign on it, in cartoons : LOOT BAG

Abbie Hoffman was the founder of the “Yippies”, an activist group that had violent clashes with the police during the 1968 Democratic National Convention in Chicago. Hoffman, along with six other defendants, were eventually brought up on charges related to the protests and became known collectively as the “Chicago Seven”.