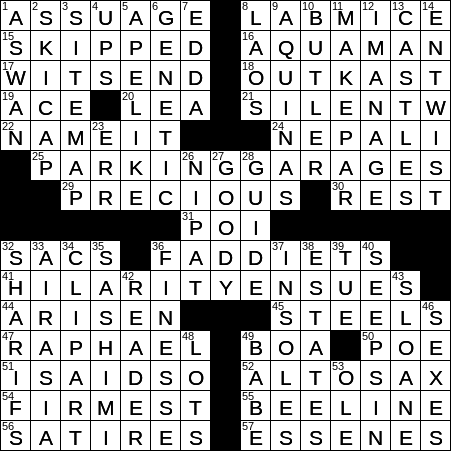 The first letter in the word “who” is a silent letter W.

Darjeeling is a town in West Bengal in the east of India in the Lesser HImalayas. Today, Darjeeling is perhaps best known outside India for the black tea that bears its name. In the days of the British Raj, the cooler climate of Darjeeling made it a popular destination for British residents seeking respite from the summer heat at the lower elevations.

41 What happens after a zany plot twist : HILARITY ENSUES

47 “Madonna of the Pinks” artist : RAPHAEL

To make a beeline for somewhere or something, one takes a direct route. The term derives from excellent homing instinct of bees.

57 Contemporaries of the Pharisees and Sadducees : ESSENES

The Essenes were a Jewish religious group who are most noted these days perhaps as the authors of the Dead Sea Scrolls.

1 City that’s home to the Mausoleum of Aga Khan : ASWAN

The “Poetic Edda” and “Prose Edda” are two ancient works that are the source for much of Norse mythology. Both Eddas were written in the 13th century in Iceland.

8 Borderer of the Mekong : LAOS

The cliché “the butler did it” is often attributed to a 1930 crime novel called “The Door” by Mary Roberts Rinehart. In “The Door”, the butler actually did commit the crime.

11 What pros usually do : MAKE PAR

13 Moves two pieces at once, in a way : CASTLES

In the notation used to record moves in games of chess, castling with the kingside rook can be recorded as O-O, and with the queenside rook as O-O-O.

43 She accompanied Ferris on his day off : SLOANE

The character Sloane Peterson in “Ferris Bueller’s Day Off” is played by actress Mia Sara. Sloane is the girlfriend of the title character.

“The Battle of the Sexes” is a 1914 film that was directed by D. W. Griffith. This original film is now “lost”, as no known copy exists. Griffith made another version of the film in 1928, releasing it as both a silent movie and as a “talkie”.