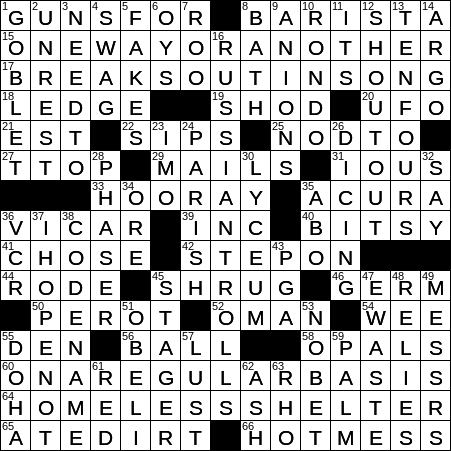 8 One who’s got something brewing : BARISTA

Taxonomically, doves and pigeons are the only members of the order Columbidae. The terms “dove” and “pigeon” are often used interchangeably. Scientifically speaking, dove species tend to be smaller that pigeon species. Colloquially though, many refer to doves as the white or nearly white species in the family.

35 International marque whose logo is a pair of calipers : ACURA

(24D Domain led by a 36-Across : PARISH)
A vicar is a member of the clergy in several Christian traditions. In more general terms, we can use the word “vicar” for a person who acts in the place of another, i.e. a deputy. It was the latter usage of the term that gave rise to the religious usage, as a vicar in a church was considered a person acting for God.

“Inc.” is a business magazine that specializes in articles about growing companies. “Inc.” publishes a list of the 500 fastest-growing private companies in the country each year, calling it the “Inc. 500”. The “Inc. 5000” is an expanded list also published by the magazine.

“Forbes” is a business magazine that has been published since 1917, when it was founded by B. C. Forbes and Walter Drey. The full name of the original publication was “Forbes: Devoted to Doers and Doings”. “Forbes” is noted for publishing lists of the biggest and richest in the world of business. In 2014, “Forbes” listed the 2000 largest public companies in the world and showed for the first time that the three biggest companies are based in China.

50 Past presidential candidate who once worked for IBM : PEROT

56 Part of a Cinderella story : BALL

Chalcedony is a mineral. It is a form of silica.

60 How Old Faithful erupts : ON A REGULAR BASIS

9 They get minuses in chemistry : ANIONS

In Internet terms, a troll is someone who attempts to disrupt online group activities. The fishing term “troll” is used to describe such a person as he or she throws out off-topic remarks in an attempt to “lure” others into some emotional response.

The Academy was founded by Plato circa 387 BC in Athens. Aristotle studied at the Academy for twenty years and then founded his own school called the Lyceum.

35 Kind of system in a hospital : ABO

49 Abbr. in a formal salutation : MESSRS

The division symbol consists of a horizontal line with a dot above and below. It is called an “obelus” (plural “obeli”). “Obelus” is the Greek word for “sharpened stick, pointed pillar”. Prior to 1659, the obelus was used as the symbol for subtraction, and not division.

59 Provider of a lifeline : PALM

63 Part of the original spelling of “Sparta” : RHO