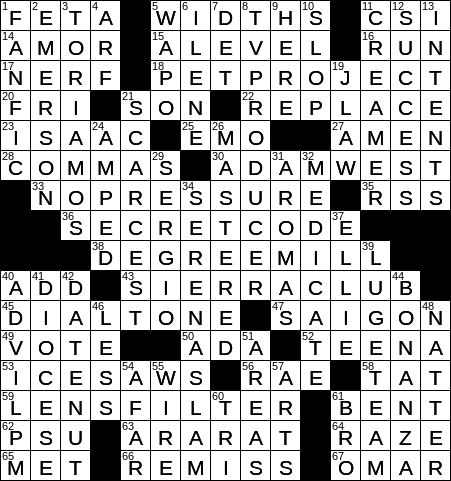 In Australia (Down Under), and in Britain and Ireland, the term “uni” is routinely used for “university”.

16 Something good in baseball, but bad in banking : RUN

Adam West was the actor who played the title role in the sixties TV series “Batman”. More recently West voiced the character named “Adam West” on the animated show “Family Guy”. Back in 1970, West was offered the role of James Bond in the movie “Diamonds are Forever”, but he turned it down!

Pennsylvania State University (PSU) was founded in 1855 as the Farmer’s High School of Pennsylvania. Penn State is listed as one of the “Public Ivies”, a public university that offers a quality of education comparable to that of the Ivy League.

Fan fiction (also “fanfic”) is fiction created by fans of an original work that uses characters from that original work.

Tori Amos is an American pianist and singer. Amos started playing the piano at two years old, and was composing piano pieces by age five. She was playing in piano bars (chaperoned by her father) when she was 14. I’m going to have to find some of her music …

5 Newspaper with the slogan “Democracy Dies in Darkness,” in brief : WAPO

“The Washington Post” (WaPo) is the oldest paper still being published in the DC area, having been founded in 1877. Famously, “The Post” reporters Bob Woodward and Carl Bernstein led the media’s investigation into what we now called the Watergate scandal. “The Washington Post” was purchased in 2013 by Jeff Bezos, the founder and CEO of Amazon.com.

Bill Gates is the former CEO of Microsoft, a company that he co-founded with Paul Allen. Gates has been listed as the wealthiest man in the world on several occasions over the past two decades. He now works full-time as co-chair of the Bill & Melinda Gates Foundation, alongside his wife Melinda. The Gates’ foundation is the largest transparently-operated charitable foundation in the world.

21 Like promethium, among all the rare earth metals : SCARCEST

Sergio Leone was an Italian film director, and someone very much associated with the genre known as “Spaghetti Westerns”. Perhaps most famous of Leone’s westerns were the so-called “Man with No Name” trilogy starring Clint Eastwood. The three films are:

37 Woman’s name that sounds like two letters of the alphabet : ELLIE

The woman’s name “Ellie” sounds like the letters “LE”.