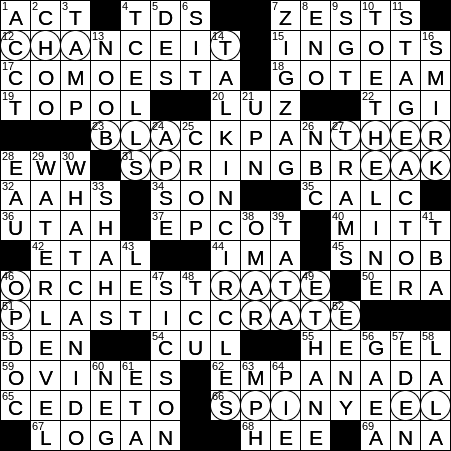 Themed answers include letters IN CIRCLES at either end. Those circled letters spell out synonyms of TALK:

Georg Wilhelm Friedrich Hegel was a German philosopher, and one of the founders of the German idealism movement. “Idealism”, in the context of the movement, was the principle that objects did not have properties in themselves, but rather that an object’s properties depended on the person perceiving the object.

An empanada is a dish made by folding pastry around cooked meat and vegetables. To me an empanada looks very similar to a dish I grew up with called a Cornish pasty.

Boston’s Logan Airport is named after General Edward Lawrence Logan, a military officer from South Boston who fought in the Spanish-American War.

1 No. at an insurance agency : ACCT

7 Shape of a lightning bolt : ZIGZAG

Laurence Olivier had to be one of the most respected actors to come out of England in the 20th century. He had tremendous impact on stage and screen, and was never short of work on either side of the Atlantic. While working in the British film industry just before WWII, Olivier met actress Vivien Leigh. The two were already married, but started an affair. Olivier travelled to Hollywood as he was cast as Heathcliff in “Wuthering Heights”, which gave him his big break in Hollywood. Leigh followed Olivier and found herself cast as Scarlett O’Hara in “Gone with the Wind”. The couple took Hollywood by storm, and eventually unraveled their prior marriages so that they could wed in 1940.

“Moesha” is a sitcom that originally aired in the late nineties starring singer Brandy Norwood in the title role, a high school student in LA. “Moesha” may be a sitcom, but it had a reputation for dealing with very real social issues such as teen pregnancy, race relations, and infidelity.

“Queen Sugar” is a TV drama that is based on a 2014 novel of the same name by Natalie Baszile. It’s all about three estranged siblings who reunite to save their family’s failing sugarcane farm in Louisiana.

46 Nonfiction film with a point of view, in brief : OP-DOC