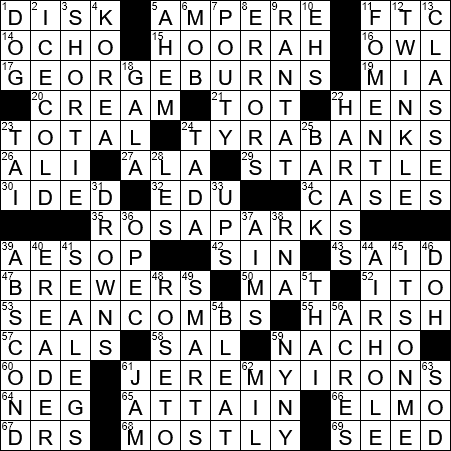 Constructed by: Saul Pink
Edited by: Will Shortz

Today’s Theme (according to Bill): Who’d Make a Good …?

Themed answers are the names of celebrities clued with reference to their family names, which double as verbs:

George Burns was the stage name of comedian and actor Nathan Birnbaum. Famously, Burns was married to Gracie Allen, who initially acted as “straight man” in their double act. The duo found that they got more laughs with Gracie acting as “Dumb Dora”, an arrangement that Burns and Allen stuck to for decades.

19 The Dolphins or the Heat, on scoreboards : MIA

The Florida Panhandle is in the Central Time Zone, whereas the rest of the state is in the Eastern Time Zone.

58 Condiment at a cantina : SAL

Jeremy Irons is much-respected English actor who is noted for his stage, television and film performances. My favorite of these performances is the one that brought him into the limelight, playing Charles Ryder in the 1981 TV adaptation of Evelyn Waugh’s “Brideshead Revisited”. Irons won a Best Actor Oscar for playing Claus von Bülow in 1990’s “Reversal of Fortune”. He is married to Irish actress Sinéad Cusack, and the couple own a castle in County Cork in the south of Ireland.

The frankfurter sausage that is typically used in a North American hot dog gets its name from Frankfurter Würstchen. The latter is a German sausage that is prepared by boiling in water, just like a hot dog frank.

12 Word repeated before “little star,” in a nursery rhyme : TWINKLE

“Twinkle Twinkle Little Star” is an English nursery rhyme. The words for the rhyme are taken from a poem called “The Star” written by Jane Taylor, by far her most famous work (although she rarely gets the credit). The rhyme is sung to a French folk tune called “Ah! vous dirai-je, Maman”, the same tune used by Mozart for a charming and famous set of variations.

36 Grp. headquartered in Austria, which isn’t a member : OPEC