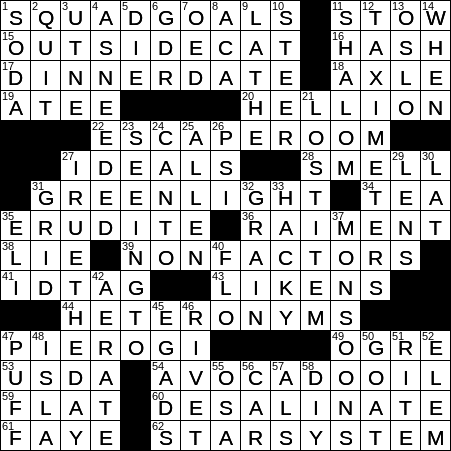 Dogs have an amazing sense of smell, and scientists tell us that it is 10,000 to 100,000 more acute than human olfactory capability. We have about 6 million olfactory receptors in our noses, compared to about 300 million in the nose of a dog. When we breathe in through our noses, all of that air goes straight to the lungs for respiration. In dogs, about 12% of inspired air is directed to a part of the nose that is dedicated to the sense of smell.

Heteronyms are words that have the same spelling, but different meanings and different pronunciations. Examples are “lead” (the metal) and “lead” (a leash), as well as “close” (near) and “close” (shut).

Pierogi are stuffed dumplings made using unleavened dough, and are a traditional dish from Poland. The term “pierogi” is the Polish name for any filled dumplings.

By definition, a cocktail known as a “fizz” includes lemon or lime juice and carbonated water. The most popular of the genre is the gin fizz, made from 3 parts gin, 2 parts lemon juice, 1 part sugar syrup and 5 parts soda water. There is also a variant known as a sloe gin fizz.

11 Peace in the Mideast : SHALOM

12 They run while you ride : TAXIMETERS

The TV and movie director Irwin Allen was known as “The Master of Disaster”, as he worked on so many disaster movies. The most famous of these were “The Poseidon Adventure” and “The Towering Inferno”, both of which he produced.

The term “monsoon” was first used in India in the days of the British Raj, when it described the seasonal winds that brought rain from the Bay of Bengal and the Arabian Sea from June to September. “Monsoon” is derived from the Portuguese “monção”, which in turn comes from the Arabic “mawsim” meaning “season”.

40 Spokeswoman in some insurance commercials : FLO

“Crikey” is an exclamation, and is probably a euphemism for “Christ”.

“Osa mayor” is the Spanish name for the constellation Ursa Major, in English “the Great Bear”.

The board game we call “The Game of Life” (also just “Life”) was created quite a few years ago, in 1869 by Milton Bradley. Back then it was called “The Checkered Game of Life” and was the first parlor game to become a popular hit. The modern version of the game was first released in 1960.

Much of the sitcom “Happy Days” was set in Arnold’s Drive-In. Arnold Takahashi was played by Pat Morita, who also played Mr Miyagi in the movie “The Karate Kid”. Morita left the show after three seasons, and was replaced by Al Molinaro as Al Delvecchio, the character who ran the diner as “Al’s” for the rest of the series’ run.

Fonzie is a character in the sitcom “Happy Days” that was originally aired from 1974 to 1984. The Fonz (aka Arthur Fonzarelli) was written as a secondary character, but eventually took over the show. Fonzie is played by Henry Winkler.