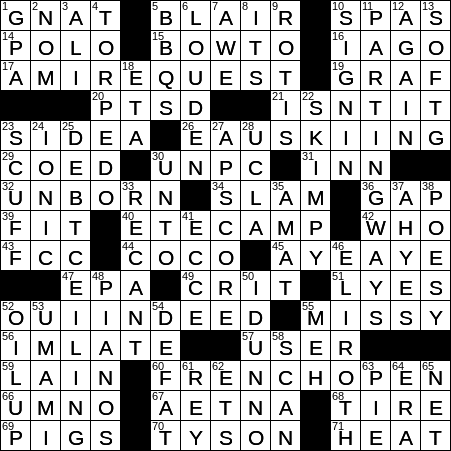 Themed answers are common phrases in which the OPENING word has been translated into FRENCH:

“The Blair Witch Project” is a 1999 horror film with an unusual twist in terms of structure. It’s about three young filmmakers who hike into the Black Hills in Maryland looking for the legendary Blair Witch. The three disappear, with only the disturbing footage they recorded being left behind. It is this “real footage” that is used to make the film.

That would be side A of a record.

A conniption, or more commonly a conniption fit, is a bout of violent anger or panic.

The aye-aye is a lemur that is native to Madagascar. It is the largest nocturnal primate in the world, and has an unusual way of feeding. The aye-aye taps on trees to find grubs, rather like a woodpecker. Having located its meal, it then uses its rodent-like teeth to gnaw into the wood and uses a specially-adapted long and narrow middle finger to pull out the grubs.

Madagascar is a large island country lying off the southeast coast of Africa in the Indian Ocean. The main island of Madagascar is the fourth largest island in the world (after Greenland, New Guinea and Borneo).

Melissa “Missy” Elliott is a rap artist who was childhood friends of fellow rapper Timbaland.

“Cosmos: A Spacetime Odyssey” is a 2014 science documentary TV show presented by astrophysicist Neil deGrasse Tyson. The series is a follow-on to the famous 1980 show “Cosmos: A Personal Voyage” that was presented by Carl Sagan.

2 Recognition for an actor, informally : NOM

In Disney’s version of the “Aladdin” story, released in 1992, the street urchin Aladdin uses one of three wishes to become a prince, so that he can get near to the Princess Jasmine, with whom he has become besotted. With the genie’s help, Aladdin takes on the persona of “Prince Ali of Ababwa”.

The first letter in the word “geometry” is a soft letter G (gee).

The Ionic was one of the three classical orders of architecture, the others being the Doric and Corinthian. An Ionic column is relatively ornate. It usually has grooves running up and down its length and at the top there is a “scroll” design called a “volute”. The scroll motif makes Ionic columns popular for the design of academic buildings. The term “Ionic” means “pertaining to Ionia”, with Ionia being an ancient territory that is located in modern-day Turkey.

27 Fig. that might earn you some credits : AP SCORE

Marina del Rey is a coastal community in California located within the borders of the City of Los Angeles. Marina del Rey is home to the world’s largest harbor for small craft, with a capacity for 5,300 boats.