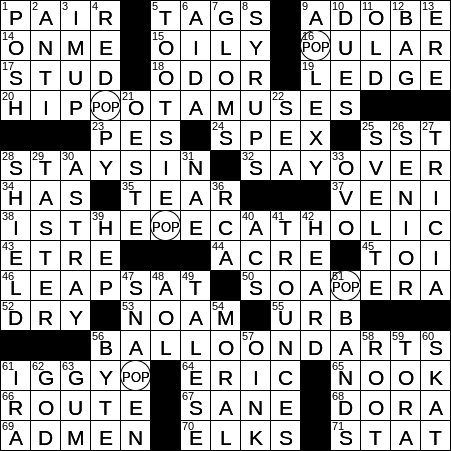 The grid includes five squares with circles, each of which represents a BALLOON. The circles contain the word “POP”, the sound made when we burst the BALLOONS with DARTS:

Adobe Systems is a San Jose-based enterprise that is best known for developing Photoshop image editing software and the Portable Document Format (PDF). The company was founded in 1982 by John Warnock and Charles Geschke, in Warnock’s garage. The Adobe Creek ran behind that garage, and the founders borrowed the name of the waterway for the company’s moniker.

Elton John had nine number-one hits in the US:

“Peut-être” is French for “maybe, perhaps”. A literal translation into English might be “it is able to be”.

44 It’s a little under a football field in area : ACRE

“Billet-doux” is a French term meaning “love letter”. A “billet” is a short note, and “doux” means sweet.

The WWI battlefields in West Flanders, East Flanders (both in Belgium) and French Flanders are often referred to in English as “Flanders Fields”. The phrase was coined by Canadian physician Lieutenant Colonel John McCrae in his 1915 poem “In Flanders Fields”.

In Flanders fields the poppies blow
Between the crosses, row on row,
That mark our place; and in the sky
The larks, still bravely singing, fly
Scarce heard amid the guns below.

We are the Dead. Short days ago
We lived, felt dawn, saw sunset glow,
Loved and were loved, and now we lie
In Flanders fields.

Take up our quarrel with the foe:
To you from failing hands we throw
The torch; be yours to hold it high.
If ye break faith with us who die
We shall not sleep, though poppies grow
In Flanders fields.

6 Verdi work that may include camels : AIDA

President Richard Nixon had two children, both daughters. The oldest is Tricia, who married Edward Finch Cox. The youngest is Julie, who married David Eisenhower, a grandson of former President Dwight D. Eisenhower.

28 One of three in the Buick logo : SHIELD

David Dunbar Buick was an inventor working in Detroit, Michigan who founded the Buick Motor Company in 1903. Buick sold his interest in Buick Motors just three years later. He passed away in 1929, practically penniless. Still, over 30 million vehicles have been built that bore the Buick name.

Gay Talese is an American author, famous as a journalist in the sixties at “The New York Times”. His 1981 book “Thy Neighbor’s Wife” is a study of sexuality in America in the early fifties. Apparently, as research for the book, Talese had sexual relations with his own neighbor’s wife for several months at a sexuality resort in Southern California called Sandstone Retreat.

51 One Direction and OneRepublic : POP BANDS

OneRepublic is a pop rock band that formed in 2002 in Colorado Springs. Initially, the band used the name “Republic”, but changed to “OneRepublic” to avoid possible conflict with similar band names.