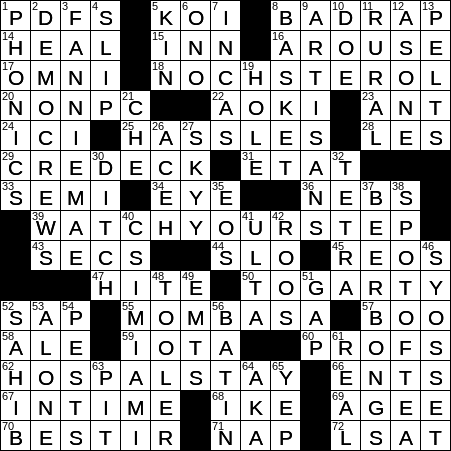 Themed answers require us to WATCH OUR STEP as we step over a HOLE, DITCH, GAP and PIT. Those pitfalls are part of the themed answers, but are written in the down-direction:

5 Fish in a Japanese pond : KOI

18 What margarine has, unlike butter : NO CHOLESTEROL

28 Paul in the Rock and Roll Hall of Fame : LES

Slo Poke ia a brand of candy, one described as caramel on a stick. It is produced by the Gilliam Candy Company.

45 Old cars with wings in their logo : REOS

Mombasa is the second-largest city in Kenya (after the capital, Nairobi). Mombasa is located on the east coast of the country, on the Indian Ocean.

A “slipway” or “slip” is a ramp on the shore in which boats can “slip” into the water. This “slipping” into the water is literally the case in a shipyard, where a vessel’s hull slips off the ramp after it is coated with grease.

John Lennon’s magnus opus is his song “Imagine”, released in 1971. “Imagine” was quite successful at the time of its release, but sadly, it only became a number one hit after Lennon was murdered in 1980. According to Lennon, the message behind the song is very simple: a world without countries or religion would be a peaceful place. Love that song …

35 Sister of Helios and Selene : EOS

Helios was the god of the Sun in Greek mythology, and is the reason that we use the prefix “helio-” to mean “sun”. He was the brother of Selene, the goddess of the moon, and Eos, the goddess of the dawn. Helios drove his chariot of the sun across the sky during the day, returning to the East at night be travelling through the ocean. The Roman equivalent to Helios was Sol.

42 Down Under jumpers, informally : ROOS

“Sahib” is most recognized as a term of address used in India, where it is used in much the same way as we use “mister” in English. The term was also used to address male Europeans in the days of the British Raj. The correct female form of address is “sahiba”, but in the colonial days the address used was “memsahib”, a melding of “ma’am” and “sahib”