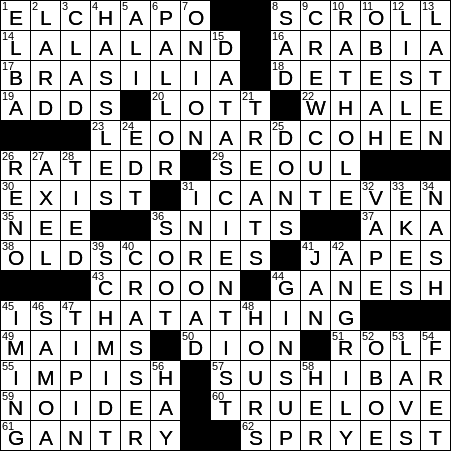 16 Home of the Nefud and Rub’ al Khali deserts : ARABIA

Brasília is the capital of Brazil, and is located in the central-west of the country. A decision was made in 1956 to move the nation’s capital from Rio de Janeiro on the coast, to a more central location. So, Brasília was founded in 1960, and is now by far the fastest growing city in the country.

Ronnie Lott is a former NFL footballer who played most of his professional career with the San Francisco 49ers. After Lott retired, he co-founded the investment firm HRJ Capital with Harris Barton and Joe Montana (the H and J in “HRJ”). HRJ was in business for nine years, but collapsed in 2009.

23 Singer of “I’m Your Man” and “Hallelujah” : LEONARD COHEN

35 Indication of another name : NEE

37 Indication of another name : AKA

“To jape” means “to joke or quip”. The exact origins of “jape” are unclear, but it does seem to come from Old French. In the mid-1600s, “to jape” was a slang term meaning “to have sex with”. No joke!

Ganesh is a Hindu deity who is usually depicted with the head of an elephant.

“My Heart Will Go On” is the love theme from the 1997 blockbuster movie “Titanic”. It was recorded by Céline Dion, and hit the number one spot in the charts all around the world. “My Heart Will Go On” was destined to become Dion’s biggest hit, and the best-selling single in the world for 1998.

51 Ida for whom a massage therapy is named : ROLF

1 Island to which one is able to return? : ELBA

9 Not quite a buzz, but almost : CREW CUT

24 Wash. Nationals games are played in it : EDT

Ogden Nash the poet was well known for his light and humorous verse, such as:

41 Mo. whose birthstone is garnet : JAN

Depending on which bakery makes the particular variety of Girl Scout cookies, the name can vary. For example, Little Brownie Bakers makes the Samoa cookies, while ABC Bakers uses the same recipe and calls the cookies Caramel deLites. The assumption is that these cookies have the exotic name “Samoa” because they contain the tropical ingredients of coconut and cocoa. The most popular variety of Girl Scout cookies sold are Thin Mints.