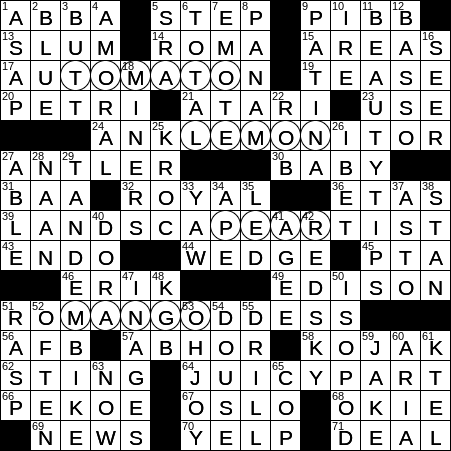 Themed answers each include a JUICY fruit as a hidden word:

1 Pop group whose name is also a rhyme scheme : ABBA

A person under house arrest often wears an ankle monitor that is used to ensure that he or she does not stray far from home. An alternative system involves random calls to the confined person’s home that have to be answered by the convict. On the face of it, house arrest seems to be a very economic alternative for society instead of the prison system. As part of the sentence, the convict may even be asked to pay for the cost of monitoring his or her house arrest.

The “royal we” is more correctly called the “majestic plural”, and is the use of a plural pronoun to describe a single person in a high office. I suppose the most often quoted phrase that uses the majestic plural is “We are not amused”, which is often attributed to Queen Victoria. The editorial we is a similar concept, in which a newspaper editor or columnist refers to himself or herself as “we” when giving an opinion.

Thomas Edison was a very successful inventor. He held over a thousand US patents in his name. Included in the list of Edison’s inventions is the phonograph, the movie camera and the long-lasting light bulb. He passed away in 1931. There is a test tube at the Henry Ford Museum that supposedly holds Edison’s last breath. Ford convinced Thomas’s son Charles to seal up a tube of air in the room just after the inventor died, as a memento.

Edwards Air Force Base is in a desert area in Southern California. Edwards is a flight test center for the Air Force, and it was here that Chuck Yeager famously broke the sound barrier for the first time. And of course, Edwards was used for many landings of the Space Shuttle.

68 “The Grapes of Wrath” migrator : OKIE

The Pan American (Pan-Am) Games are held every four years, the year just before the Summer Olympic Games. The participating athletes all come from the Americas.

11 Advice much seen in Cosmopolitan and Seventeen : BEAUTY TIPS

28 Bread baked in a tandoor : NAAN

“2001: A Space Odyssey” is a groundbreaking 1968 sci-fi film that was inspired by an Arthur C. Clarke short story “The Sentinel”. Clarke and director Stanley Kubrick teamed up to write the film’s screenplay. While working on the screenplay, Clarke wrote a novel with the same title as the film, and published it soon after the release of the movie.

61 Producer of many compilation records : K-TEL