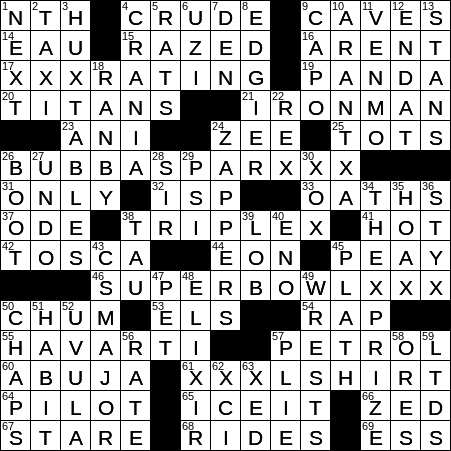 “Spelunking” is an American term for recreational caving, although the word has Latin roots (“spelunca” is the Latin for “cave”). The term originated in the 1940s in New England when it was adopted by a group of men who explored caves in the area.

“Eau de toilette” (toilet water) is a diluted perfume. A French person when dressing is said to be attending to his or her “toilette”.

19 One that “eats, shoots and leaves,” in a classic joke : PANDA

Iron Man is another comic book superheroes, this one created by Stan Lee for Marvel Comics. The character is the alter ego of Tony Stark, and has become very famous in recent years since the appearance of the 2008 action movie “Iron Man” starring Robert Downey, Jr. in the title role. Iron Man’s love interest, Pepper Potts, is routinely played by Gwyneth Paltrow in the same series of films.

Austin Peay was Governor of Tennessee from 1923 until 1927. It was Governor Peay who signed into law the Butler Act, which prevented public schools from teaching the Theory of Evolution. It was the Butler Act that precipitated the Scopes Monkey Trial.

That would be “The Cosby Show”.

10 ___ Sánchez Vicario of the International Tennis Hall of Fame : ARANTXA

Arantxa Sánchez Vicario is a former World No. 1 tennis player from Barcelona, Spain. Vicario earned about 60 million dollars over her career, and yet in 2012 she found herself struggling and is in debt. Reportedly her parents “lost” all of their daughter’s money.

Sylvia Plath was a poet from Boston, Massachusetts who lived much of her life in the UK where she married fellow poet Ted Hughes. The couple had a tumultuous relationship, and Plath had a long battle with depression. Plath wrote just one novel, called “The Bell Jar”, which is semi-autobiographical. It describes the main character’s descent into mental illness. Plath herself lost her battle with depression in 1963, committing suicide at the age of 30 years, and just one month after “The Bell Jar” was published.

Chaps are leather leggings that are worn when riding a horse. The purpose of the garment is provide protection for the legs when riding through bushy terrain, perhaps a heavy thicket. The name “chaps” comes from the Spanish name for the leggings, which is “chaparejos” or “chaparreras”. The Spanish term comes from chaparro, a Spanish word that can be used for a low-growing thicket.

The verb “to tog up”, meaning “to dress up”, comes from the Latin “toga” describing the garment worn in ancient Rome. “Tog” can be also be used as an informal word for a coat or a cloak. Back in Ireland, togs are what we call swimming shorts.