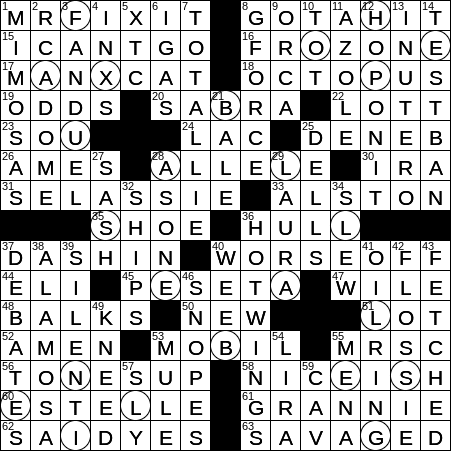 Today’s Theme (according to Bill): Five of Diamonds

Today’s grid includes five sets of circled letters arranged in a diamond-shape. Each set of letters spells out a particular diamond, when read in a counter-clockwise direction. Those diamonds are:

8 Singled or doubled : GOT A HIT

16 Character voiced by Samuel L. Jackson in “The Incredibles” : FROZONE

Jewish people born in the State of Israel, or the historical region of israel, are known as Sabras. “Sabra” is actually the name of the prickly pear, the thorny desert cactus. Apparently the name “Sabra” is used because someone born in the region is said to be tough on the outside and sweet on the inside, just like a prickly pear.

Walter “Smokey” Alston was the very successful manager of the Brooklyn/Los Angeles Dodgers from 1954 to 1976. Alston was not very successful as a player. He played as first baseman for the St. Louis Cardinals but only for one season and in only one game, in 1936. Alston had only one at bat and he struck out, on three pitches.

Mobil was founded as part of the the breakup of Standard Oil in 1911. The company was originally called Socony (Standard Oil Company of New York). Socony merged with Magnolia Petroleum Company in the thirties and adopted Magnolia’s Pegasus emblem, and it has been used ever since. Mobil merged with Exxon in 1999 but the Mobil brand and Pegasus are alive and well.

In “Seinfeld”, Jerry’s friend George was the son of Frank and Estelle Costanza. George was portrayed by Jason Alexander, and the character was loosely based on the show’s co-creator Larry David. The character’s name came from Jerry Seinfeld’s real-life friend Mike Costanza. George’s parents were played by the great Jerry Stiller and Estelle Harris.

INXS (pronounced “in excess”) was a rock band from Australia. The band formed in 1977 in Sydney as the Farriss Brothers, as three of the original lineups were indeed brothers.

XTC were a band from Swindon in the UK whose most famous hits were “Making Plans for Nigel” from 1979, and “Senses Working Overtime” from 1982.

6 Alternatives to Krogers and Safeways : IGAS

8 Something everyone on earth experiences : G-FORCE

13 Still being developed : IN UTERO

29 ___ Ingalls Wilder, author of “Little House on the Prairie” : LAURA

The letter I in the word “friends” is a silent letter I.

Weeb Ewbank was a football coach mostly known for coaching the Baltimore Colts and the New York Jets in the fifties, sixties and seventies. He won two NFL championships with the Colts (1958, 1959), and one AFL championship with the Jets (1968).