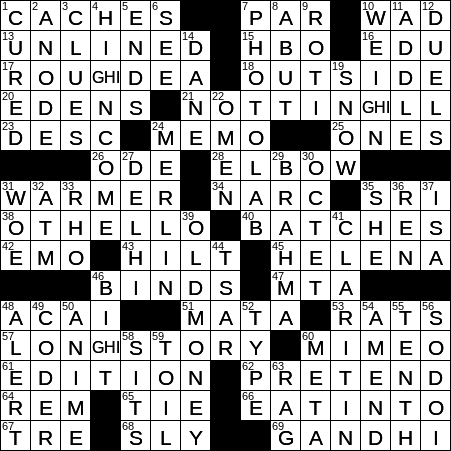 Constructed by: Mangesh Ghogre
Edited by: Will Shortz

We have a rebus puzzle today, with “G and HI” appearing in three squares in the grid:

“True Detective” is a crime drama made by HBO that has an interesting format. Each series has its own narrative and cast. The show seems to be attracting some great actors. The first season was led by Matthew McConaughey and Woody Harrelson, and the second by Colin Farrell and Rachel McAdams.

38 Board game with black-and-white pieces : OTHELLO

61 Info for a bibliophile : EDITION

A bibliophile: a lover of books.

67 Number of colori on the Italian flag : TRE

2 One end of a battery : ANODE

3 What a crossword has that a sudoku doesn’t : CLUES

14 One with possible Viking ancestry : DANE

19 Feature of the Himalayas : SNOW

32 Device required by law to be outfitted with Braille : ATM

No one seems to be very certain of the origin of the phrase “that’s all she wrote”. One popular story though is that it stems from the unfortunate “Dear John” letters that some soldiers received during WWII.

There are five metacarpal bones in each hand. They make up the framework of the palm and the back of the hand. Each metacarpal is connected to a finger and the wrist. The equivalent bones in the foot are called the metatarsals.