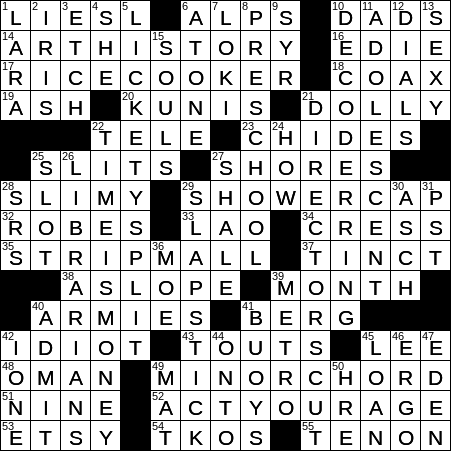 1 Von Trapp daughter in “The Sound of Music” : LIESL

A dolly is a small platform on rollers, especially on a movie set. Apparently, it is so called because it’s supposed to look like a doll. No, it doesn’t. I don’t believe it …

42 One who tells a tale full of sound and fury, per Macbeth : IDIOT

She should have died hereafter;
There would have been a time for such a word.
— To-morrow, and to-morrow, and to-morrow,
Creeps in this petty pace from day to day,
To the last syllable of recorded time;
And all our yesterdays have lighted fools
The way to dusty death. Out, out, brief candle!
Life’s but a walking shadow, a poor player
That struts and frets his hour upon the stage
And then is heard no more. It is a tale
Told by an idiot, full of sound and fury
Signifying nothing.

48 Arab nation once colonized by the Portuguese : OMAN

Experts, unlike me, can wax lyrical on the technical differences between major and minor keys and scales. To me, music written in major keys is very strident, often very joyful and “honest”. Music written in minor keys (usually my favorite) is more feminine, more delicate and often quite sad.

51 Value not appearing on any Scrabble tile : NINE

54 Some referee calls, for short : TKOS

One simple type of joint used in carpentry is a mortise and tenon. It is basically a projection carved at the end of one piece of wood that fits into a hole cut into the end of another. In the related dovetail joint, the projecting tenon is not rectangular but is cut at a bias, so that when the dovetails are joined they resist being pulled apart. You’ll see dovetail joints in drawers around the house.

4 Marine mollusk exoskeleton vendor, in a tongue twister? : SHE

“Lickety-split” is the latest in a line of terms that come from the word “lick”, which was used in the sense of a “fast sprint in a race” back in the early 1800s. From “lick” there evolved “licketie”, “lickety-click”, “lickety-cut” and finally “lickety-split”, all just colorful ways to say “fast”.

7 Enemy of the Avengers : LOKI

The Euphrates is one of the two rivers that formed the main boundaries of the historical region known as Mesopotamia, the other being the Tigris.

Back in the mid-1400s, the word “tinsel” applied to cloth into which was woven gold or silver thread. The term came from the Middle French word “estincelle” meaning “spark, spangle”, which ultimately derived from the Latin “scintilla” meaning “spark”. By the end of the 1500s, “tinsel” described thin strip of shiny metal. The word “Tinseltown” wasn’t applied to Hollywood until 1972.

Moe Greene is a character in Mario Puzo’s novel “The Godfather”. The character bears a resemblance to the real-life gangster Bugsy Siegel, as both Siegel and Greene are driving forces behind the development of the gambling industry in Las Vegas. In “The Godfather” movies, Moe Greene was portrayed by Alex Rocco.