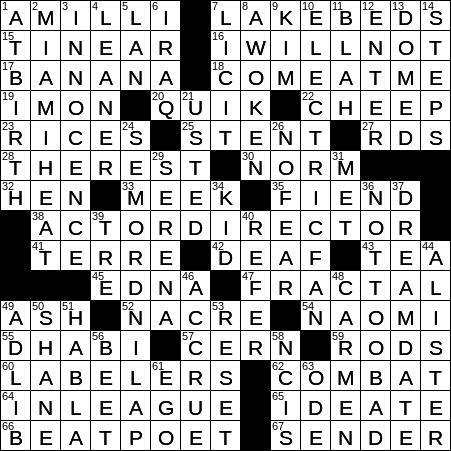 Constructed by: Paolo Pasco and Erik Agard
Edited by: Will Shortz

Angioplasty is the mechanical widening of a narrowed artery. In the surgical procedure, a balloon catheter is inflated at the point of the obstruction to open up the artery. A stent may then be inserted to make sure the vessel remains open.

A bell curve graph is more correctly known as a Gaussian function. The frequency with which many phenomena occur in nature results in a bell curve shape.

Someone described a “milquetoast” is particularly weak and timid. The term comes from a character called Caspar Milquetoast in the comic strip “The Timid Soul” drawn by H. T. Webster. Webster came up with Caspar’s name by deliberately misspelling “milk toast”, which is a bland food that is suitable for someone with a weak stomach.

“Pomme de terre” is French for “potato” and translates literally as “earth apple”.

A fractal is a fascinating geometric shape, one that can be split into parts, each of which is a smaller version (almost identical to) of the larger shape. The name “fractal” comes from the Latin “fractus” meaning “broken” or “fragmented”. Fractals are found all over nature, most notably the shapes created by ice crystals. It can be hard to tell the difference between the shapes of ice as it freezes on glass, viewed with the eye or viewed under a microscope. Fractals can also be seen in clouds, snowflakes, and even in cauliflower and broccoli!

Nacre, also known as mother-of-pearl, is the strong iridescent material laid down by some mollusks on the inside of their shells, and it’s also what makes up pearls. The creature lays down nacre as a defensive mechanism, protecting the soft tissue of its body from the rough surface of the outer shell. Similarly, it uses nacre to encapsulate harmful debris or a parasite that penetrates the shell, and that’s how a pearl is formed. Cultured pearls are made by inserting a tissue graft from a donor oyster, around which nacre is laid down.

54 Mourner in the Book of Ruth : NAOMI

The Book of Ruth in the Hebrew Bible and the Christian Old Testament tells the story of Ruth. Ruth was one of two women who married the two sons of Elimelech and Naomi. Father and sons died, leaving the three widows to fend for themselves. Naomi decided that it was best to go to Bethlehem. Orpah was Naomi’s second daughter-in-law, and she decided to return to her home. Ruth decided to stick with her mother-in-law, using the words “Whither thou goest, I will go”.

1 When Apgar tests are performed : AT BIRTH

6 Modern-day home of where the biblical Abraham was born : IRAQ

9 Despot with a nuclear arsenal : KIM

12 Arrive on the scene : ENTER

As in a play, for example.

“Semordnilap” is a palindrome of “palindromes”.

Pope Francis was elected on 13 March 2013 as the 266th Bishop of Rome and leader of the Roman Catholic church. The new pope is famously taking a much simpler and more modest approach to the office, as he did with his life back in Argentina. Francis is the first pope since 1903 not to reside in the papal residence, choosing to live instead in the less lavish Vatican guesthouse.

49 Jack Nicholson’s classic line “You can’t handle the truth,” for one : AD LIB

The line, “You can’t handle the truth!” is a line spoken by the Jack Nicholson character in the superb 1992 movie “A Few Good Men”. The line was voted the 29th greatest American movie quote of all time in the AFI’s 2005 list (“Frankly, my dear, I don’t give a damn” was at the number-one spot).

50 1949 Jack Schaefer novel made into an Oscar-nominated film : SHANE

61 Word hidden in this clue that might hold up negotiations : EGO

The word “ego” is hidden in the word “negotiations”.

63 Ben Jonson wrote one to himself : ODE