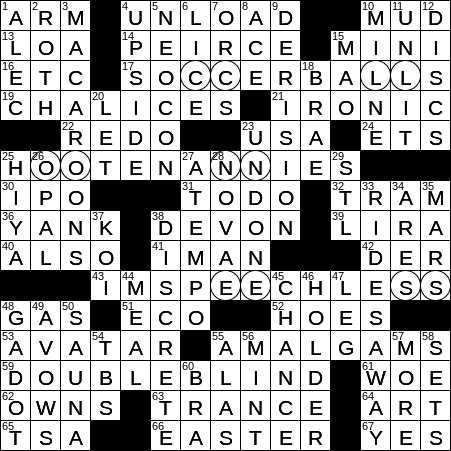 Constructed by: Ezra Brauner & Jeff Chen
Edited by: Will Shortz

Ten down-answers skip over a circled letter in the grid, i.e. we are BLIND to these letters. The skipped letters come in pairs (DOUBLES), and spell out the word CLONES:

“Big Nate” is a comic strip that was launched in 1991, written and illustrated by Lincoln Peirce. The hero of the strip is a rebellious sixth-grader named Nate Wright.

17 They get kicked around a lot : SOCCER BALLS

24 Travelers from afar, for short : ETS

38 English county that’s the setting for Agatha Christie’s “And Then There Were None” : DEVON

Istanbul, Turkey (formerly “Byzantium” and “Constantinople”) is the only metropolis in the world that is situated in two continents. The city extends both on the European side and on the Asian side of the Bosphorus river.

“Mélange” is the French word for “mixture”.

59 Kind of experiment … or a hint to 10 Down answers in this puzzle : DOUBLE-BLIND

A macaron is a meringue-based cookie associated with French cuisine, although the original confection hailed from Italy. Macarons are often confused with macaroons, small cookies made from ground almonds, and often coconut.

By definition, a neoconservative (neocon) is a formerly left-aligned politician who has moved to the right, and who now supports the use of American power and military might to bring democracy, liberty, equality and human rights to other countries.

15 Who said “Where there is oppression, there is resistance” : MAO

That would be tennis, perhaps.

27 Returning to the original speed, on scores : A TEMPO

37 Swimmer in an ornamental pond : KOI

Players of the board game Monopoly are familiar with the accompanying sets of Chance and Community Chest cards. The original version of the game came with just the Chance cards, and those cards came with quotes attributed to Thomas Jefferson, John Ruskin and Andrew Carnegie.

46 One kneeling with the ball in a field goal attempt : HOLDER