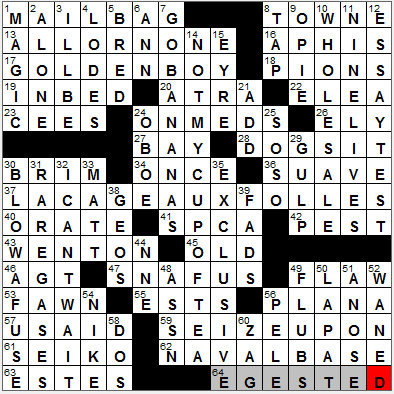 20. ___ Plus (razor brand) : ATRA
Fortunately for crossword setters, the Atra razor was introduced by Gillette in 1977. It was sold as the Contour in some markets and its derivative products are still around today.

22. Home to a school of pre-Socratic philosophers : ELEA
Zeno of Elea was a Greek philosopher who lived in Elea, a Greek colony in Southern Italy. He is famous for his “paradoxes”, a set of problems that really make you think! In the problem known as Achilles and the Tortoise, Zeno tells us that Achilles races a tortoise, giving the tortoise a head start (of say 100 meters). By the time Achilles reaches the starting point of the tortoise, the tortoise will have moved on, albeit only a small distance. Achilles then sets his sight on the tortoise’s new position and runs to it. Again the tortoise has moved ahead a little. Achilles keeps on moving to the tortoise’s new position but can never actually catch his slower rival, or can he …?

24. Using an Rx, say : ON MEDS
There seems to some uncertainty about the origin of the symbol “Rx”, used for a medical prescription. One explanation is that it comes from the astrological sign for Jupiter, a symbol put on prescriptions in days of old to invoke Jupiter’s blessing to help the patient recover.

26. Ron who played Tarzan : ELY
Ron Ely is most famous for playing the title role in the “Tarzan” TV series in the sixties. Years later, Ely hosted the 1980 and 1981 “Miss America” pageants right after longtime host Bert Parks retired, before the job was taken over by Gary Collins. And Ely is a successful mystery novelist. He wrote “Night Shadows” and “East Beach” in the mid-nineties, both of which featured his private eye Jake Sands.

28. Loafs on the job : DOGS IT
“To dog it” is a slang term (that’s new to me) meaning to not expend the effort necessary to accomplish a task.

37. Six-time Tony winner of 1984 : LA CAGE AUX FOLLES
The musical “La Cage aux Folles” opened on Broadway in 1985. “La Cage aux Folles” is a musical adaptation of the French play of the same name by Jean Poiret that was first staged in 1973. I’ve never had the pleasure of seeing the stage play nor musical, but I love the wonderful movie adaptation, “The Birdcage”, released in 1996.

“The Birdcage” is a very entertaining movie from 1996, an English-language adaptation of the Franco-Italian film “La Cage aux Folles”. The movie has an exceptionally strong cast that includes Robin Williams, Nathan Lane, Gene Hackman and Hank Azaria.

40. Stump the crowd? : ORATE
“To stump” can mean to go on a speaking tour during a political campaign. This peculiarly American term dates back to the 19th century. Back then a “stump speech” was an address given by someone standing on a large tree stump that provided a convenient perch to help the speaker get his or her message across to the crowd.

41. Vet employer, maybe: Abbr. : SPCA
Unlike in other countries, there is no “umbrella” organization in the US with the goal of preventing cruelty to animals. Instead there are independent organizations set up all over the nation using the name SPCA. Having said that, there is an American Society for the Prevention of Cruelty to Animals (ASPCA) that was originally intended to operate across the country, but really it now focuses its efforts in New York City.

46. 86 or 99 on “Get Smart”: Abbr. : AGT
The satirical comedy series called “Get Smart” was the creation of Mel Brooks and Buck Henry, and starred Don Adams as Agent 86, Maxwell Smart. It was on the air from 1965 to 1970. Smart’s shoe phone was a hilarious prop used in almost every episode. When Smart dialed the number 117, the shoe converted into a gun. Cool stuff …

47. Tangles : SNAFUS
SNAFU is an acronym standing for Situation Normal: All Fouled Up (well, that’s the “polite” version!). As you might imagine, the term developed in the US Army, during WWII.

57. Foreign assistance org. since 1961 : USAID
The US Agency for International Development (USAID) was set up by President John F. Kennedy in 1961.

61. Big name in watches : SEIKO
Seiko Epson is a Japanese company, one of the largest manufacturers of printers in the world. The company has its roots in the watch business, roots that go back to 1942. Seiko was chosen as the official time keeper for the 1964 Summer Olympics in Tokyo and was asked to supply a timer that produced a printed record. This request brought Seiko into the business of printer production. The company developed the world’s first mini-printer for the 1964 Games and called it EP-101 (EP standing for Electronic Printer). In 1975 Seiko introduced the next generation of EP printers which was called EPSON, from “SON of EP”. Cute, huh?

Down
1. Word with square or number : MAGIC
A magic square is a series of numbers arranged in a square so that all lines of numbers, including diagonals, add up to the same total. Such squares have been used for centuries to create talismans designed to bring good luck.

The term “magic number” has a number of applications. There is a magic number in physics and one in the world of chemistry, for example.

4. Bonanzas : LODES
A”bonanza” is a mine with a rich pocket of ore that can be exploited. “Bonanza” is the Spanish word for a rich lode, and we imported the term into English. “Bonanza” originally meant “fair weather at sea”, and from that came to mean “prosperity, good fortune”. Ultimately, “bonanza” comes from the Latin “bonus” meaning “good”.

6. Rule among true crime writers : ANN
Ann Rule is a true crime writer, who comes from a crime-fighting family with sheriffs, a medical examiner and a prosecutor around her as she grew up. She started off writing with a male pen name (Andy Stack) as it was perceived that she would have more success in the genre, after a virtual “sex change”.

9. Grandnephew in 1960s TV : OPIE
Ron Howard sure has come a long way since playing Opie on “The Andy Griffith Show”. Howard has directed some fabulous movies, including favorites of mine like “Apollo 13”, “A Beautiful Mind” and “The Da Vinci Code”. And today, Opie is a grandfather …

11. Cat’s gift : NINE LIVES
In the English-speaking world, the myth is that cats have nine lives. In Spanish-speaking cultures, they are said to have seven. Cats are less fortunate in Turkish and Arabic cultures, as the number of lives is limited to six.

15. “Gentle reader, may you never feel what I then felt!” speaker : EYRE
“Jane Eyre” is of course the novel written by Charlotte Bronte under the pen name Currer Bell. Over the years, I’ve shared here on the blog that the storyline is a little too dark and Gothic for my taste, but a very persuasive blog reader convinced me to look more at the romantic side of the story and give it a second chance. I watched a wonderful 4-hour television adaptation of the novel made by the BBC a while back, and I have to say that because I was focused on the relationship between Jane and Rochester, I was able to push past the Gothic influences (that depress me) so I really enjoyed the performance. I thoroughly recommend this 2006 BBC adaptation to fans of the novel.

24. Instrument with a bell : OBOE
The flared end at the bottom of an oboe is known as “the bell”.

The oboe is perhaps my favorite of the reed instruments. The name “oboe” comes from the French “hautbois” which means “high wood”. When you hear an orchestra tuning before a performance you’ll note (pun intended!) that the oboe starts off the process by playing an “A”. The rest of the musicians in turn tune to that oboe’s “A”. Oh, and if you want to read a fun book (almost an “exposé”) about life playing the oboe, you might try “Mozart in the Jungle” by oboist Blair Tindall. I heard recently that the folks at HBO are working towards a pilot based on the book, and I can’t wait to see it!

31. Contents of the rightmost column of a table : RARE GASES
The rare gases are better known as the noble gases, but neither term is really very accurate. Noble gas might be a better choice though, as they are all relatively nonreactive. But rare they are not. Argon, for example, is a major constituent of the air that we breathe.

33. Political writer ___ Bai : MATT
Matt Bai is the writer of the “Political Times” column in the “New York Times”.

38. Prizm and Spectrum, once : GEOS
Geos were small vehicles manufactured by General Motors mainly in the nineties. They were designed to compete head-to-head with the small imports that were gaining market share at the time in the US. Some Geo models that you might remember are the Metro, the Prizm and the Storm. The cars were actually built as joint-ventures with Japanese manufacturers. The Prizm was a GM/Toyota project, the Metro was GM/Suzuki, and the Storm was GM/Isuzu.

54. Figure on the front of Olympic medals since 1928 : NIKE
In the Ancient Olympic Games, the winner of an event was awarded an olive wreath. When the games were revived in 1896, the winners were originally given a silver medal and an olive branch, with runners-up receiving a bronze medal and a laurel branch. The tradition of giving gold, silver and bronze medals began at the 1904 Summer Olympic Games held in St. Louis, Missouri.

56. Forward who wore #10 : PELE
Pelé is the nickname of Edison de Nascimento, a soccer player who has used the name Pelé for most of his life. He is now retired, and for my money was the world’s greatest ever player of the game. He is the only person to have been part of three World Cup winning squads. Pelé is a national treasure in his native Brazil.