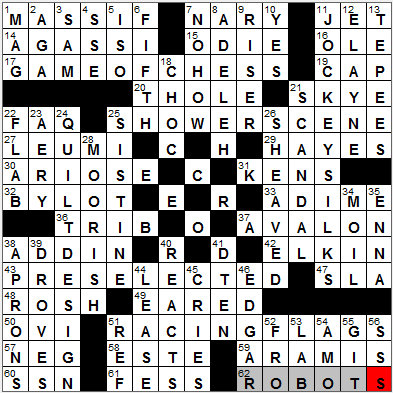 CROSSWORD SETTER: Elizabeth C. Gorski
THEME: CHECKERBOARD … the theme answers point to the checkerboard pattern at the center of the grid, and to the letters CHECKERBOARD that should go into that checkerboard:

17A. Pastime for Napoleon and Fidel Castro : GAME OF CHESS
51A. Things waved at the Indy 500 : RACING FLAGS
11A. Colorful riding gear : JOCKEY SILKS
24A. Bee production : QUILT DESIGN

COMPLETION TIME: 19m 45s
ANSWERS I MISSED: ADELE H (ADELEE), as well as the letters in the middle of the CHECKERBOARD


Today’s Wiki-est, Amazonian Googlies
1. Group of mountains : MASSIF
“Massif” is a geological term describing a section of the earth’s crust that moves upwards due to the action of tectonic plates. The whole massif retains its structure, with movement taking place at surrounding fault lines. The term “massif” is also used for a group of mountains formed by such geological action. “Massif” is French for “massive”.

14. 1992 Wimbledon winner : AGASSI
“Open” is the autobiography of tennis professional Andre Agassi, published in 2009. An amazing revelation in the book is that Agassi’s famous head of hair was actually a wig for much of his playing career. Can you imagine how hard it must have been to play tennis at his level with a rug stuck on?

16. Cry spelled with an accent on the last letter : OLE
“Olé” is a Spanish word that translates as “bravo”.

17. Pastime for Napoleon and Fidel Castro : GAME OF CHESS
Napoleon Bonaparte is known to have played chess. There are three games that were recorded that supposedly were played by him. However, that fact is disputed as many feel that he was actually a weak player, which isn’t reflected in the recorded games.

Fidel Castro was very active in the chess world, both as a player and as a tournament organizer and sponsor. In 2002 Castro hosted a massive chess tournament in Havana with over 1500 participants. The collection of amateurs and masters played simultaneously in an exhibition that was the largest ever seen in the world.

20. Oarlock : THOLE
In a boat, a thole is a wooden peg or pin that acts as a fulcrum for an oar that it is used in rowing. The thole is inserted into a hole in the gunwale, the top edge of the side of the boat.

21. ___ terrier : SKYE
The Skye terrier is a breed of dog that is actually under threat of extinction. A few years ago there were only 30 Skye terriers born in the breed’s native land of the UK.

22. E-help page : FAQ
Most websites have a page listing answers to Frequently Asked Questions (FAQ). There is a link to this blog’s FAQ page at the top right of every page.

25. It prompted a flood of “Psycho” analysis : SHOWER SCENE
Alfred Hitchcock’s 1960 movie “Psycho” was based on a 1959 novel of the same name by Robert Bloch. In turn, the novel was loosely based on real-life events that took place in Wisconsin. The famous shower scene runs for a full 3 minutes, and is one of the most iconic scenes in cinematic history. The blood shown in the shower is actually chocolate syrup, and the sounds of the knife going into flesh are the sounds of a knife being plunged into a melon.

27. Bank of Israel : LEUMI
Bank Leumi is Israel’s leading commercial bank. It was founded way back in 1902 as the Anglo Palestine Company, actually in London, England.

29. Woody part of Ohio? : HAYES
Woody Hayes was a football player and coach, serving as head coach at Ohio State from 1951 to 1978. After a very successful career, Hayes was fired by Ohio State for striking an opposing Clemson player during the 1978 Gator Bowl.

30. Songlike : ARIOSE
A tune that is “ariose” is song-like, characterized by melody as opposed to harmony.

31. Understands, to a Scot : KENS
“Ken” is a Scottish verb meaning “to know”, as in being able to recognize a person or thing.

36. “Lou Grant” paper, with “the” : TRIB
“Lou Grant” is a spinoff from “The Mary Tyler Moore Show”. Lou Grant, played so ably by Ed Asner, headed up a television newsroom in Minneapolis. In the spinoff show, Grant was the city editor of the fictional “Los Angeles Tribune”. Also, whereas the original show was a sitcom, the spinoff was a drama series.

37. Where King Arthur was conveyed for his wounds to be healed : AVALON
Avalon is a legendary island featured in the Arthurian legends. The name Avalon probably comes from the word “afal”, the Welsh word for “apple”, reflecting the fact that the island was noted for its beautiful apples. Avalon is where King Arthur’s famous sword (Excalibur) was forged, and supposedly where Arthur was buried.

42. Stanley who wrote “George Mills” : ELKIN
Stanley Elkin was a novelist from Brooklyn, New York who grew up in Chicago. Elkin lived most of his life in St. Louis, where he was a member of the faculty at Washington University. He published ten novels, mostly dealing with pop culture of the fifties and sixties.

47. Org. in ’70s headlines : SLA
The Symbionese Liberation Army (SLA) was founded in 1973 by an escapee of the prison system, Donald DeFreeze. The group’s manifesto promoted the rights of African Americans although, in the 2-3 year life of the group, DeFreeze was the only black member. Famously, the SLA kidnapped heiress Patty Hearst in 1974.

48. ___ Hashana : ROSH
Rosh Hashanah is loosely referred to as “Jewish New Year”. The literal translation from Hebrew is “head of the year”.

50. Prefix with posit : OVI-
An oviparous animal is one that lays eggs. Oviparity is the common method of reproduction in fish, reptiles and birds.

51. Things waved at the Indy 500 : RACING FLAGS
The first Indy 500 race was held on Memorial Day in 1911. The winner that day was one Ray Harroun. He had seen someone using a rear view mirror on a horse-drawn vehicle, and decided to fit one on his Marmon “Wasp” motor car. Supposedly that was the first ever use of a rear view mirror on a motor vehicle.

57. Photog’s master : NEG
A negative serves as the master for a photograph.

58. Spanish direction : ESTE
“Este” is the Spanish word for “east”.

The “Three Musketeers” were Athos, Porthos and Aramis, and their young protégé was D’Artagnan. A musketeer was an infantry soldier who was equipped with a musket. Paradoxically, Alexander Dumas’ “Three Musketeers” really didn’t use their muskets, and were better known for their prowess with their swords.

60. Govt.-issued ID : SSN
The main purpose of a Social Security Number (SSN) is to track individuals for the purposes of taxation although, given its ubiquitous use, it is looking more and more like an “identity number” to me. The social security number system was introduced in 1936. Prior to 1986, an SSN was required only for persons with substantial income so many children under 14 had no number assigned. For some years the IRS had a concern that a lot of people were claiming children who did not actually exist as dependents on their tax returns. So, from 1986 onward, it is a requirement to get a SSN for any dependents over the ago of 5. Sure enough, in 1987 seven million dependents “disappeared”.

“Seventeen” is a magazine marketed towards teenage girls. It is the oldest teen magazine in the US, first published in 1944.

2. Turkish title : AGA
“Aga”, or “agha”, is a title that was used by both civil and military officials in the Ottoman Empire.

3. Tom Hanks’s “Sleepless in Seattle” role : SAM
“Sleepless in Seattle” is a lovely romantic comedy directed and co-written by Nora Ephron, released in 1993. The film’s storyline is based on the excellent 1957 movie “An Affair to Remember”, and there are numerous direct references to the Cary Grant/Deborah Kerr classic throughout the “remake”. The lead roles in “Sleepless …” are played by Tom Hanks and Meg Ryan.

6. Bottle of whiskey : FIFTH
A “fifth” is an American unit of volume used for liquor. It used to be equal to one fifth of a US gallon. Since the seventies we’ve been using a “metric fifth” which is equal to 750 mL, the standard size for wine bottles around the world.

8. Title role in a 1975 Truffaut film : ADELE H
“L’Histoire d’Adèle H.” (The Story of Adele H) is a French film released in 1975. It tells the story of Adèle Hugo, the daughter of writer Victor Hugo. The film was directed by an icon of French cinema, François Truffaut.

12. Funny Boosler : ELAYNE
Elayne Boosler is a stand-up comedian and was one of the first female comedians to have her act aired as a special on cable television. She does have some funny lines, and here’s one that I particularly like:

“When women are depressed they either eat or go shopping. Men invade another country.”

13. Cones on plains : TEPEES
A tepee (also written as “tipi” and “teepee”) is a cone-shaped tent traditionally made from animal hides that is used by the Great Plains Native Americans. A wigwam is a completely different structure and is often a misnomer for a tepee. A wigwam is a domed structure built by Native Americans in the West and Southwest, intended to be a more permanent dwelling. The wigwam can also be covered with hides but more often was covered with grass, reeds, brush or cloth.

22. Liposuction target : FLAB
Liposuction dates back to the 1920s, and was developed by a surgeon in France. However, the procedure quickly lost favor when a French model developed gangrene after surgery. As a result it wasn’t until the mid-seventies that modern liposuction gained favor, after being popularized by two Italian-American surgeons in Rome.

24. Bee production : QUILT DESIGN
Back in 18th century America, when neighbors would gather to work together for the benefit of one of their group, such a meeting was called a “bee”. The name “bee” was an allusion to the social nature of the insect. In modern parlance, a further element of entertainment and pleasure has been introduced, for example in a “quilting bee”.

25. ___ Chapel : SISTINE
The Sistine Chapel, in the Pope’s residence in Rome, takes its name from Pope Sixtus IV who was responsible for restoring the old Capella Magna in the 15th century. It was about a century later (1508-1512) that Michelangelo painted the ceiling of the Sistine Chapel under the patronage of Pope Julius II.

26. Collected, as wheat : SHEAVED
To sheave is to collect into a sheaf.

28. Like Shakespeare’s Othello : MOORISH
One of the most famous Moors in literature is Othello, the title character in William Shakespeare’s tragedy “Othello, the Moor of Venice”. The word “Moor” describes various peoples of North Africa, usually of the Muslim faith. At the height of their geographic influence the Moors occupied much of the Iberian peninsula, calling it Al Andalus (from which modern Andalusia gets its name).

35. Sicilian province or its capital : ENNA
The city of Enna sits very high up in the hills of Sicily, overlooking the whole island below. Enna is the capital of the province that bears its name, which is the highest province in the whole country of Italy.

41. Square at the end of the fourth row in Battleship : D-TEN
Battleship is a remarkably fun guessing game that I used to play as a child. Back then we would play it just using pencil and paper, although these days kids are more likely to play an electronic version.

46. Whodunit award : EDGAR
The Edgar Allan Poe Awards (the Edgars) are presented annually by the Mystery Writers of America.

52. Big do, for short : FRO
That would be the afro hairstyle.