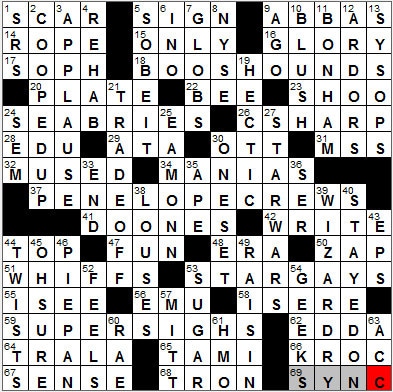 CROSSWORD SETTER: Zoe Wheeler
THEME: Sounds Like … each of the theme answers fits its clue, but is a homophone for another, well-known term, and there’s a “z” sound in each of those homophones:


Today’s Wiki-est, Amazonian Googlies
1. Frankenstein’s monster had one on his forehead : SCAR
Mary Shelley’s Gothic novel has the full title of “Frankenstein; or, The Modern Prometheus”. The subtitle underscores one of the themes of the book, a warning about man’s expansion into the Industrial Revolution.

9. Mahmoud of the P.L.O. : ABBAS
Mahmoud Abbas is very much in the news these days. Abbas took over as Chairman of the Palestine Liberation Organization in 2004 after the death of Yasser Arafat. He is also the President of the Palestinian National Authority, equivalent to “head of state”.

14. Lasso : ROPE
Our English word “lasso” comes from the Spanish “lazo”, and ultimately from the Latin “laqueum” meaning “noose, snare”.

16. Word sung twice before “hallelujah” : GLORY
In 1856 William Steffe wrote the tune that was eventually used for “The Battle Hymn of the Republic”. Before long it was one of the most popular tunes of the day, sung with a number of different lyrics. After the outbreak of the Civil War, Thomas Bishop composed lyrics to a famous abolitionist version of the tune, “John Brown’s Body”. The word’s to “John Brown’s Body” became less remembered than the strident melody, so Julia Ward Howe wrote the famous patriotic lyrics that spread thought the ranks of the Union forces under he title of “The Battle Hymn of the Republic”.

18. Acts the heckler at the Westminster dog show? : BOOS HOUNDS (sounds like “boozehounds”)
The first Westminster Kennel Club Dog Show was held in 1877, which makes it the second oldest sporting event in the country (narrowly beaten out by the Kentucky Derby, first run in 1875). The show was originally limited to gun dogs and was established by a group of hunters who routinely met at the Westminster Hotel in Manhattan, New York.

24. Cheeses manufactured in the Mediterranean? : SEA BRIES (sounds like “sea breeze”)
Brie is a soft cheese, named after the French province of Brie where it originated.

28. Cousin of .org or .com : EDU
A domain name is basically the address of a website on the Internet. A few years ago I moved this website to a new address (from puzzle.paxient.com to NYTCrossword.com). Just like in the real world, one pays for an address. I now own (well rent!) both of the addresses that have been used for this blog, but choose to “do business” (publish the blog) at the more memorable address … NYTCrossword.com. It’s sort of like preferring to have a Park Avenue address instead of one on say Elm Street. In the Internet world, the address is intended to indicate what type of activity goes on at a particular address. So an address with “.com” implies a “company” website, a “.org” implies a non-profit website and “.edu” implies an education website. But, in reality anyone can rent whatever address they want, as it just goes to the highest bidder. Most folks remember “.com” addresses, so they are the most popular. “.com” is meant to imply a “business address” as I say, but it can even be used to chat about crosswords!

30. Baseball Hall-of-Famer who batted left and threw right : OTT
At 5′ 9″, Mel Ott weighed just 170 lb (I don’t think he took steroids!) and yet he was the first National League player to hit over 500 home runs. Sadly, Ott died in a car accident in New Orleans in 1958 when he was only 49 years old.

34. Furbys and yo-yos, once : MANIAS
Furbys are little electronic robot toys that were all the rage around Christmas 1998 and the following year. Furbys retailed at about $35 but folks often paid several hundred dollars to get hold of one.

37. Entourages for Odysseus’ faithful wife? : PENELOPE CREWS (sounds like “Penélope Cruz”)
According to Homer’s epic poem “Odyssey”, Penelope was the wife of Odysseus. Penelope found herself having to fend off a total of 108 suitors while Odysseus was away on his 20-year journey, but she remained loyal to her husband. In fact when Odysseus returned, he disguised himself as a beggar in order to spy on his wife and determine if she had indeed been faithful to him.

41. Lorna ___ (cookies) : DOONES
Lorna Doone shortbread cookies were introduced by Nabisco in 1912. Presumably, they were named after the famous novel by R. D. Blackmore.

Neil Patrick Harris got his big break very early in his career, playing the title role in television’s “Doogie Howser, M.D.” He is now seen regularly on the sitcom “How I Met Your Mother”, playing the shallow womanizer Barney Stinson. Harris is also quite the magician and serves on the Board of Directors of Hollywood’s Magic Castle, a nightclub for magicians and magic enthusiasts.

55. “___ dead people” : I SEE
“I see dead people” is one of the most famous lines in movies. Of course the line comes from M. Night Shyamalan’s “The Sixth Sense

“, and is spoken by then child actor Haley Joel Osment to Bruce Willis. If you haven’t seen the movie, do yourself a favor and go rent it. I won’t tell you about the plot …

56. Cousin of an ostrich : EMU
The emu has had a tough time in Australia since man settled there. There was even an “Emu War” in Western Australia in 1932 when migrating emus competed with livestock for water and food. Soldiers were sent in and used machine guns in an unsuccessful attempt to drive off the “invading force”. The emus were clever, breaking their usual formation and adopting guerrilla tactics, operating as smaller units. After 50 days of “war”, the military withdrew. Subsequent requests for military help for the farmers were ignored. The emus had emerged victorious …

58. Department in SE France : ISERE
The Isère river gives its name to the French Department of Isère, located partly in the French Alps. In turn, Isère gave its name to a somewhat famous ship called the Isère, which in 1885 delivered the Statue of Liberty from France to America, in 214 crates.

59. Expressions of regret from apartment building managers? : SUPER SIGHS (sounds like “supersize”)
“Supersize” is a very large portion of fast food. The supersize concept was of course introduced by McDonald’s, back in 1993 (called “Dino-Size” back then). If you haven’t seen it, there is a marvelous documentary from 2004 called “Super Size Me

” which goes into the whole fast food phenomenon. I thoroughly recommend the film as I found it both fascinating and entertaining …

62. Icelandic epic : EDDA
The Poetic Edda and Prose Edda are two ancient works that are the source for much of Norse mythology.

65. Romance/thriller novelist Hoag : TAMI
Tami Hoag is a novelist best known for writing romances and thrillers. She is a prolific writer and once had five consecutive titles on the New York Times bestsellers list, all in a 20-month period.

66. McDonald’s founder Ray : KROC
Ray Kroc didn’t found the McDonald’s restaurant chain, as he joined the corporation in 1954 and McDonald’s had been around since 1940. What Kroc did was introduce the idea of assembly-line preparation of the meals, and standardization of ingredients so that a Big Mac tasted the same no matter where in the world it was ordered. His “recipe” for the restaurant turned it into the (sad!) success it is today.

68. 1982 sci-fi film with a 2010 sequel : TRON
Released in 1982, “Tron” was one of the first mainstream films to make extensive use of computer graphics. The starring role is played by Jeff Bridges.

6. Odysseus’ savior : INO
Ino was a mortal queen of Orchomenus through her marriage to King Athamas. In Greek mythology, Ino became the goddess Leukothea after her death. As Leukothea she provided divine aid to Odysseus, according to Homer’s “Odyssey”. She provided Odysseus with a magical veil that he used to escape from Poseidon.

8. It lists G.M. and I.B.M. : NYSE
The roots of the New York Stock Exchange (NYSE) go back to 1792 when a group of 24 stock brokers set up the New York Stock & Exchange Board. They did so in an agreement signed under a buttonwood tree outside 68 Wall Street. That document became known as the Buttonwood Agreement.

General Motors (GM) is still the largest manufacturer of cars in the world, at least in terms of numbers of cars sold. GM was established in 1908 in Flint, Michigan as a holding company for Buick, which in turn had been founded in 1899. GM’s Buick brand is the oldest, still-active automotive brand in the US.

IBM was founded as the Tabulating Machine Company in 1896. It changed its name to the Computing Tabulating Recording Corporation (CTR) in 1911, and was listed on the New York Stock Exchange in 1916. The name of International Business Machines (IBM) was given first to the company’s Canadian subsidiary, and then its South American subsidiary. In 1924, it was decided to adopt the International Business Machines name for the whole company. Good choice …

11. John of Led Zeppelin : BONHAM
Jon Bonham was the much-admired drummer of the English band Led Zeppelin. In 2011, Bonham was voted by readers of “Rolling Stone” magazine as the best drummer of all time. Bonham died in 1980 at the age of 32 after having choked on his own vomit. In the 24 hours prior to his death, the coroner determined that Bonham had consumed 40 shots of vodka.

24. Half a school yr. : SEM
“Semester” is a German word from the Latin “semestris”, an adjective meaning “of six months”. We of course use “semester” in a system that divides an academic year into two roughly equal parts. A trimester system has three parts, and a quarter system has four.

27. Source of the all-time best-selling movie-related toy line : STAR WARS
The “Star Wars” film series has made over 4 billion dollars of box office revenue. That makes it the third-highest-grossing film series of all time. Second most successful series is the James Bond franchise, and the top spot is held by the “Harry Potter” movies.

43. Some records, for short : EPS
An extended play record (EP) contains more music than a single, but less than an LP.

46. Tin tossed as the first Frisbee : PIE PAN
The Frisbee concept started back in 1938 with a couple who had an upturned cake pan that they were tossing between each other on Santa Monica Beach in California. They were offered 25 cents for the pan on the spot, and as pans could be bought for 5 cents, the pair figured there was a living to be earned.

49. Sun-Maid tidbit : RAISIN
The Sun-Maid brand of raisins belongs to a cooperative of raisin growers in California. The cooperative was founded in 1912, and the famous Sun-Maid girl shown on each container of raisins was actually a seeder and packer called Lorraine Collet who worked for one of the members of the cooperative.

Virginia Polytechnic Institute and State University (Virginia Tech) has its main campus in Blacksburg, Virginia. It was founded in 1872 as an agricultural and mechanical land-grant college. Sadly, the school will forever be associated with the 2007 Virginia Tech massacre in which 32 people were shot dead on the campus, the deadliest shooting incident by a lone gunman in US history.