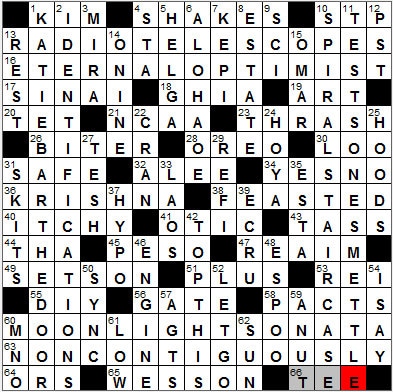 CROSSWORD SETTER: Scott Atkinson
THEME: NON-CONTIGUOUSLY … the black squares in the grid are laid out non-contiguously, meaning that no black square touches another:

63A. How this puzzle’s black squares are arranged : NON-CONTIGUOUSLY


Today’s Wiki-est, Amazonian Googlies
1. The miss in “Miss Saigon” : KIM
“Miss Saigon” is a musical that premiered in London in 1989, and one that is based on Puccini’s opera “Madame Butterfly”. “Miss Saigon” was written by Claude-Michel Schönberg and Alain Boublil, the duo responsible for “Les Misérables”. We saw both shows in London during their heyday, and I much preferred “Miss Saigon”. Back then the big thing was to have a big “special effect” in a stage musical, and for “Miss Saigon” this is the landing of a life-size helicopter on the stage. At the performance we attended there was an announcement that “the helicopter was broken”, so we had a fun time watching actors running around pretending there was a helicopter in that climactic scene …

16. Panglossian person : ETERNAL OPTIMIST
Someone described as “panglossian” is blindly naive and optimistic. The term comes from the character Pangloss who appears in Voltaire’s satirical novella “Candide, ou l’Optimisme”, which title translates as “Candide: or, Optimism”.

17. Asia-to-Africa link : SINAI
The Sinai Peninsula is in the eastern part of Egypt, the triangular peninsula bounded by the Mediterranean to the north and the Red Sea to the south. It is the only part of Egypt that lies in Asia as opposed to Africa. The eastern land border of the peninsula is shared with Israel, and Israel occupied the Sinai during the 1956 Suez Crisis and the Six Day War of 1967.

18. Carmen ___ (“The Producers” role) : GHIA
Carmen Ghia is a character in the Mel Brooks stage and screen hit “The Producers”. He is the “common law assistant” to the theater director Roger Elizabeth De Bris. Ghia’s name is a play on the car that was made by Volkswagen called the “Karmann Ghia”.

“The Producers” is a 1968 satirical movie written and directed by Mel Brooks, the first film he ever directed. Brooks adapted the movie into a hugely successful Broadway musical that won a record 12 Tony Awards. The original leads in the stage show, Nathan Lane and Matthew Broderick, then appeared in a 2005 movie adaptation of the musical version of the original film! I really didn’t care for the film but went to a local production of the stage show and have to say I had a good time …

21. Grp. concerned with bowls : NCAA
The National Collegiate Athletic Association (NCAA) dates back to the Presidency of Theodore Roosevelt. When the President’s son broke his nose playing football at Harvard, Roosevelt turned his attention to the number of serious injuries and even deaths occurring in college sports. He instigated meetings between the major educational institutions leading to the formation of the Intercollegiate Athletic Association of the United States (IAAUS) in 1906, which was given the remit of regulating college sports. The IAAUS became the NCAA in 1910.

28. Ice cream mix-in : OREO
The Oreo was the biggest selling cookie in the 20th century, and almost 500 billion of them have been produced since they were introduced in 1912 by Nabisco. In those early days the creme filling was made with pork fat, but today vegetable oils are used instead. If you take a bite out of an Oreo sold outside of America you might notice a difference from the homegrown cookie, as coconut oil is added to give a different taste.

30. Place to go in Soho : LOO
When I was growing up in Ireland, a “bathroom” was a room that had a bath and no toilet. The separate room with the commode was called “the toilet” or sometimes the W.C. (the water closet). Apparently the term closet was used because in the 1800s when homeowners started installing toilets indoors they often displaced clothes in a “closet”, as a closet was the right size to take the commode. It has been suggested that the British term “loo” comes from Waterloo (water-closet … water-loo), but no one seems to know for sure.

The area of London called Soho had a very poor reputation for most of the 20th century as it was home to the city’s red light district. Soho has been transformed though, and has been a very fashionable neighborhood since the 1980s.

32. On the 31-Across side : ALEE
“Alee” is the direction away from the wind. If a sailor points into the wind, he or she is pointing “aweather”.

36. South Asian chant word : KRISHNA
The Hare Krishna mantra dates back to the 15th century. It is a 16-word mantra that can be written as:

A “mantra” is a word that is used as a focus for the mind while meditating.

43. Longtime Russian acronym : TASS
TASS is the abbreviation used for the former news agency, the Telegraph Association of the Soviet Union (Telegrafnoye Agentstvo Sovetskovo Soyuza). When the Soviet Union dissolved in 1992, the Moscow-based agency’s scope changed, along with its name. It is now known as the Information Telegraph Agency of Russia (ITAR-TASS).

45. Chihuahua scratch? : PESO
“Scratch” has been used as a slang word for money since the days of WWI.

53. King, in Cape Verde : REI
The Republic of Cape Verde is an island nation in the Atlantic Ocean off the west coast of Africa. The country takes its name from Cap-Vert, a peninsula in Senegal and the most westerly point on the continent. Cape Verde was an uninhabited group of islands when it was colonized by the Portuguese in the 15th century.

58. SALT I and II, e.g. : PACTS
There were two rounds of Strategic Arms Limitation Talks between the US and the Soviet Union, and two resulting treaties (SALT I & SALT II). The opening round of SALT I talks were held in Helsinki as far back as 1970.

60. Beloved “Immortal Beloved” piece : MOONLIGHT SONATA
Beethoven subtitled his Piano Sonata No. 14 as “Quasi una fantasia”, or “sonata in the manner of a fantasy” in English. Five years after Beethoven died a music critic wrote that the (superb!) first movement of the piece had an effect like that of monnlight shining on Lake Lucerne. Since then, the work has been known as the Moonlight Sonata.

“Immortal Beloved” is one of my favorite movies of all time, although that is partly because I have a penchant for biographical films about the lives of classical composers. This 1994 film is an exploration of who might be the “immortal beloved” that Beethoven referred to in three letters that he wrote that were found among his private papers after he died. It’s a great tale and of course the musical score is just wonderful …

65. Gunsmith with Smith : WESSON
Smith & Wesson is the largest manufacturer of handguns in the US. The company was founded in 1852 by Horace Smith and Daniel B. Wesson.

Down
1. “Take cover!” : KATIE, BAR THE DOOR
“Katy, bar the door” is an American phrase (that I had never heard of!) that is a warning to take precautions as there may be trouble ahead. The origin of the phrase doesn’t seem to be clear but, as always, there’s a lot of speculation.

3. Star in Cetus : MIRA
Mira is a red giant star in the constellation Cetus.

Red giants are very large stars with a relatively low mass. The atmosphere of a red giant is also very inflated and extends a long way into space so the surface of that atmosphere that we see is relatively cool, which gives it a red color.

Cetus is a constellation named after a sea monster from Greek mythology. Today, Cetus is often called “the Whale”.

5. Hägar’s wife : HELGA
“Hagar the Horrible” is a comic strip that was created by the late Dik Browne and is now drawn by his son, Chris Browne. “Hagar the Terrible” (not “Horrible”) was the nickname given to Dik by his sons.

6. Polynesian farewell song : ALOHA ‘OE
“Aloha ‘Oe” is a song of Hawaii composed by Liliuokalani, the last monarch of Hawaii and her only queen. The title translates as “Farewell to Thee”.

7. “Beau Geste” headgear : KEPI
The kepi is that circular cap with a visor, worn in particular by the French military.

“Beau Geste” is a 1924 novel by the British writer P. C. Wren. The hero of the piece is Michael “Beau” Geste, an upper-class Englishman who joins the French Foreign Legion and embarks on a life of adventure and intrigue.

11. Tackles a tough task : TESTS ONE’S METTLE
“Mettle” is such a lovely word. It means courage and fortitude, or spirit. “Mettle” is simply a variant spelling of the word “metal”.

12. W. Coast clock setting : PST
Local solar time was replaced with standard time zones due to the increasing use of rail travel and telecommunications as the variations in local solar times became somewhat inconvenient. Time zones in the US vary in hourly increments, but in some parts of the world a 30-minute or even 15-minute difference can apply.

14. Center for cat-tails? : O’ NINE
The cat o’ nine tails was a vicious instrument of punishment, particularly popular in the Royal Navy. The “cat” was made up on nine cord thongs and at the end of each thong was a knot. The specialty knot was aptly called a blood knot, and was designed to bite into the skin and draw blood. It was these “claws” at the end of the thongs, along with the nine “tails” that gave the name to the whip, the “cat o’ nine tails”.

15. Highly decorated Bradley : OMAR
Omar Bradley graduated from West Point in the class of 1915, along with Dwight Eisenhower who also attained the rank of General of the Army. Bradley was the last person to hold the rank of a five-star commissioned officer, and he was the first general to serve as Chairman of the Joint Chiefs of Staff. I was struck by a quotation from Bradley from later in his life:

24. Georgetown athlete : HOYA
The athletic teams of Georgetown University are known as the Hoyas. The name is derived from “Hoya Saxa”, a traditional cheer yelled out at Georgetown games as far back as 1893. The term is a mixture of Greek and Latin, with the Greek word “hoya” meaning “such” or “what”, and “saxa” translating from Latin as “rocks” or “small stones”. The cheer is usually rendered in English as “what rocks!”.

27. “Sax All Night” New Ager : TESH
John Tesh is a pianist and composer, as well as a radio and television presenter.

33. Hmong homeland : LAOS
The official name for the country of Laos is the Lao People’s Democratic Republic. In the Lao language, the name is “Meuang Lao”. The French ruled the country as part of French Indochina, having united three separate Lao kingdoms. As there was a plural of “Lao” entities united into one, the French added the “S” and so today we tend to use “Laos” instead of “Lao”.

The Hmong people are an ethnic group from the mountains of China, Vietnam, Laos and Thailand.

39. Sandy shade : ECRU
The shade called ecru is a grayish, yellowish brown. The word “ecru” comes from French and means “raw, unbleached”. It has the same roots as our word “crude”.

54. Exeter exclamation : I SAY!
Exeter is a historic city in the country of Devon in the southwest of England. The city takes its name from the river on which it lies, the River Exe.

60. 6 letters : MNO
The letters MNO are found on the number 6 on the keypad of a telephone.

62. Apollo’s chariot “passenger” : SUN
In Greek mythology, Eos is the goddess of the dawn who lived at the edge of the ocean. She would wake each morning and open the gates of heaven to allow Apollo to ride his chariot across the sky (the sun).