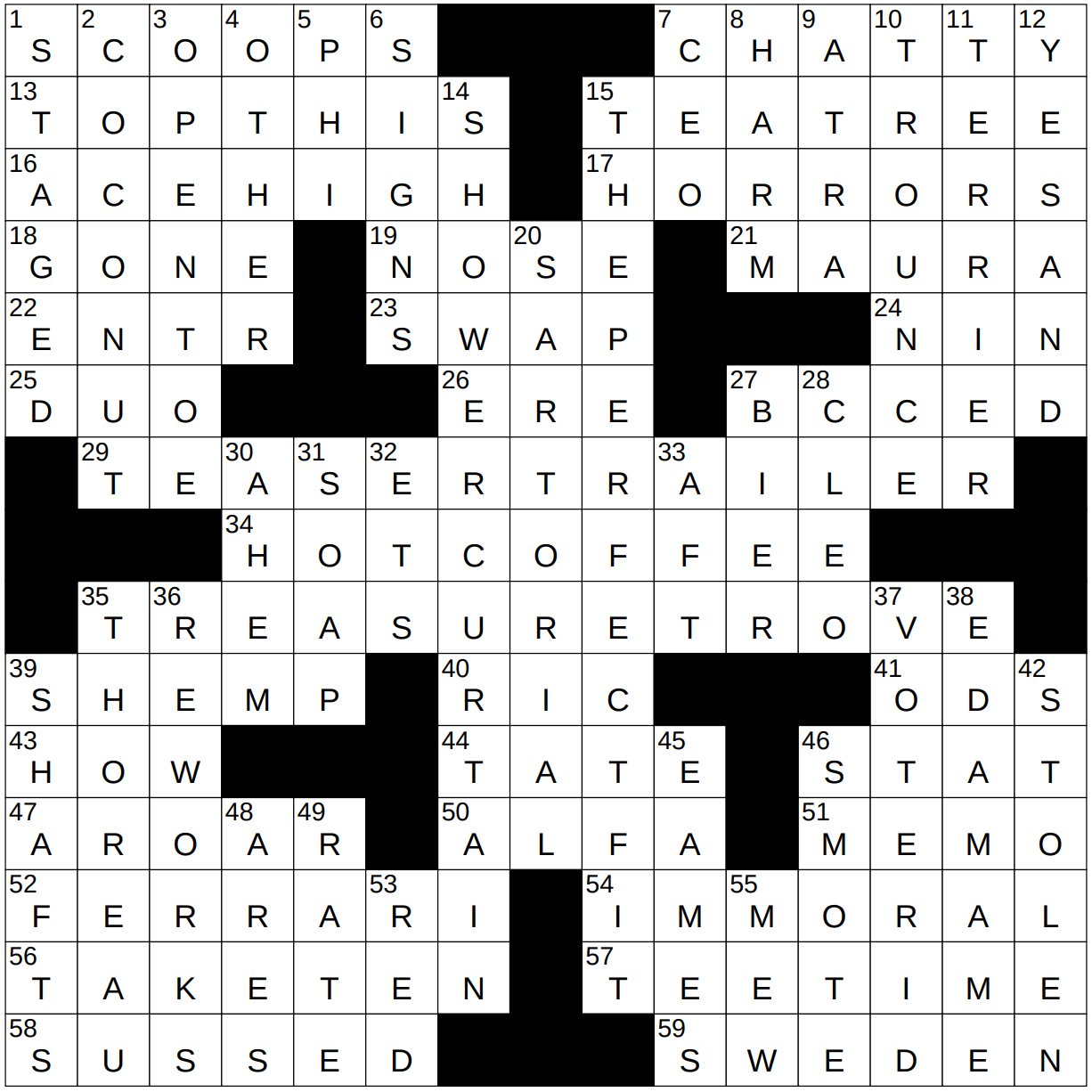 Constructed by: Scott Graham
Edited by: Will Shortz

Today’s Theme (according to Bill): Teetotal

Themed answers each comprise two words starting with the letter T. And, every clue in the puzzle starts with a T. And, all the black squares in the grids are in T-shapes:

Maura Tierney is an actress from Boston, Massachusetts. Tierney is best known for playing Lisa Miller on television’s “NewsRadio” and Abby Lockhart on “ER”.

“The Affair” is a drama series on Showtime about a novelist and a waitress having an extramarital affair in a Long Island resort town. Stars of the show are the marvelous Dominic West and Ruth Wilson. I haven’t seen this one, but hear good things …

“The Merry Wives of Windsor” is one of William Shakespeare’s comedies, and perhaps the most farcical of all his works. The main character is Sir John Falstaff, an overweight and jocular character intent on seducing one of the “merry wives”. The Windsor in the title is the Windsor Castle just outside London that is now a favored residence of Queen Elizabeth II.

27 Tagged surreptitiously, as on an email : BCC’ED

Ric Ocasek was an American musician of Czech heritage. He was the lead vocalist of the Cars rock band.

“Memorandum” means “thing to be remembered” in Latin, from the verb “memorare” meaning “to call to mind”.

Golfer Tiger Woods’ real name is Eldrick Tont Woods. “Tont” is a traditional Thai name. Tiger’s father Earl Woods met his second wife Kultida Punsawad in 1966, while on a tour of duty with the US Army in Thailand.

59 Third-largest country in the European Union, after France and Spain : SWEDEN

The coconut is the fruit of the coconut palm. The term “coconut” comes from “coco” and “nut”, with “coco” being 16th-century Spanish and Portuguese for “head”, and more specifically “grinning face”. The three holes found in the base of a coconut shell might be said to resemble a human face.

5 The Eagles, on scoreboards : PHI

The Philadelphia Eagles were established in 1933 and joined the National Football League as a replacement for the bankrupt Frankford Yellow Jackets, also from Philadelphia. The “Eagle” name was inspired by the Blue Eagle insignia that was used by companies who were in compliance with the National Industrial Recovery Act that was central to President Roosevelt’s New Deal Program.

Most of the signs of the classical Greek zodiac are animals. This fact relates to the etymology of the term “zodiac”, which comes from the Greek “zodiakos kyklos”, literally “circle of animals”.

Most terrier breeds of dog originated in Britain and Ireland. They were developed as working dogs, with the job of controlling populations of rats, rabbits and foxes by rooting them out above and below the ground. The name “terrier” comes via Middle French from the Latin “terra” meaning “earth”, a reflection of the breed’s habit of burrowing into the earth looking for its prey.

32 Travelers from afar, for short : ETS

Teriyaki is a Japanese technique of cooking in which the foods are grilled in a sweet soy sauce marinade. The marinade may or may not include ginger.

To shaft someone is to treat him or her unfairly. It’s one of those terms that I dislike and avoid because it probably derives from slang terms for cruel and tasteless acts.