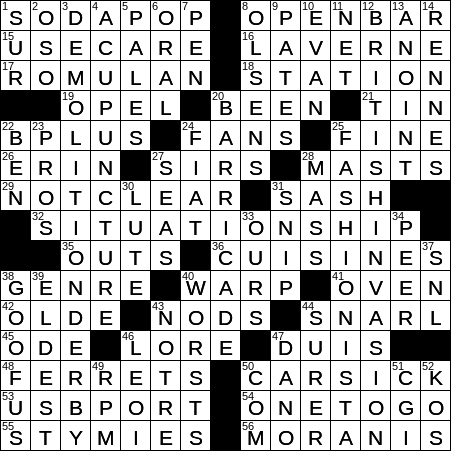 16 Half of a former sitcom duo : LAVERNE

On the late-seventies and early-eighties sitcom “Laverne & Shirley”, Penny Marshall played Laverne (De Fazio) , and Cindy Williams played Shirley (Feeney). The show was a spin-off of “Happy Days”, in which Laverne and Shirley were friends of the Fonz.

The word “stymie” comes from golf, and is a situation in which one’s approach to the hole is blocked by an opponent’s ball. We use the term more broadly for a distressing situation.

Rick Moranis is a Canadian actor who got his break with on the “Second City Television” show in the eighties. On the big screen, he is perhaps best known for his prominent roles in “Ghostbusters” and in the “Honey, I Shrunk the Kids” series of films.

9 Spreads out on the table : PATES

The Beatles arrived in the US for their first tour in February 1964, arriving at John F. Kennedy Airport to a very, very warm reception. The group’s arrival was the first “action” in what came to be known as “the British Invasion”.

Rennes is the capital city of the Brittany region of France, and is also the administrative capital of the department known as Ille-et-Vilaine.

25 Many a Vogue subscriber : FASHIONISTA

27 Some of them are described as red and yellow, but not orange : SEAS

Midnight Mass is a liturgy celebrated on the night of Christmas Eve in many Christian churches around the world, especially in the West. The ceremony is held to honor the birth of Jesus.

46 Sainted fifth-century pope who met with Attila the Hun : LEO I