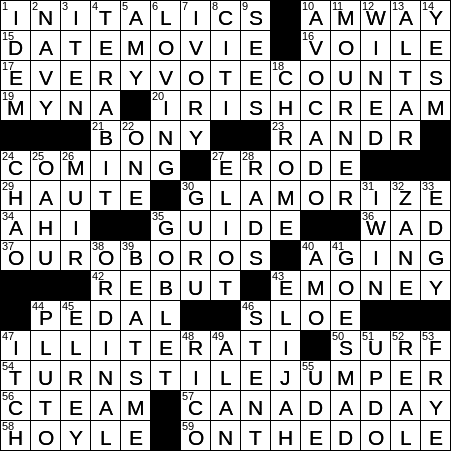 16 Fabric for a wedding dress : VOILE

Voile is a soft and sheer fabric, usually made from cotton, that is often used as a window treatment. Voile curtains are similar to net curtains and may be used as mosquito nets, for example. Aptly enough, “voile” is the French word for “veil”.

A “cream liqueur” is one that includes dairy cream. The most famous example is probably Baileys Irish Cream, that is made made from cream and Irish whiskey. A crème liqueur, on the other hand, is one that includes a lot of added sugar, but no dairy cream. Examples are crème de cacao (chocolate-flavored), crème de menthe (mintf-lavored) and crème de cassis (blackcurrant-flavored).

Canada’s national day is known as Canada Day, and has been held on July 1st annually since 1879. The holiday was originally referred to as Dominion Day, and recognizes the date in 1867 when the British colonies of Canada, Nova Scotia and New Brunswick were united into one dominion within the British Empire using the name “Canada”. Dominion Day became Canada Day in 1982.

Edmond Hoyle was a writer, and someone famous for documenting the rules and play of card games. In particular, Hoyle first wrote a book on the game of whist that was very popular. Such was the success of Hoyle’s treatises that we use the phrase “according to Hoyle” to mean “according to some respected authority”. When the Poker Hall of Fame was founded in 1979, Edmund Hoyle was one of the first inductees, even though the game of power was invented after he died.

59 Receiving benefits : ON THE DOLE

1 The same, in legal citations : IDEM

I-10 is the most southerly of the interstate routes that cross from the Atlantic to the Pacific. I-10 stretches from Santa Monica, California to Jacksonville, Florida. Various stretches of the route have been given different names, for example, the Rosa Parks Freeway, the Santa Monica Freeway, the San Bernardino Freeway and the Christopher Columbus Transcontinental Highway.

The numerical prefix “tera-” means “trillion”. The prefix was first adopted in 1947, and comes from the Greek “teras” meaning “marvel, monster”.

In the Roman Catholic Church, an episcopal see is the official seat of a bishop, and is usually described by the town or city where the bishop resides and has his cathedral. The most famous see in the church is called the Holy See, the episcopal see of the Bishop of Rome, the Pope.

Aiea is a town located in the city of Honolulu, Hawaii. Aiea is located on Aiea Bay, which is part of Pearl Harbor.

Dosimeters measure exposure to something in the environment, with radiation exposure the most recognized. Exposure to ionizing radiation is cumulative, so people who risk exposure wear dosimeters and records are kept for each individual to track exposure over a lifetime. The rad is a unit used to measure radiation levels, but it is largely obsolete now. The rad has been superseded by the rem.

Elijah was a prophet in the northern kingdom of Israel according to the Books of Kings in the Hebrew Bible and the Qur’an. The name “Elijah” translates from Hebrew as “My God is Yahweh”. Elijah is also known Elias.

46 Need for some bypass surgery : STENT

Canadian actor Alan Thicke is best known for portraying the patriarch of the Seaver family on the sitcom “Growing Pains”. He was also quite successful as a composer of TV theme songs. Along with his first wife, Thicke co-wrote the theme songs to the sitcoms “Diff’rent Strokes” and “The Facts of Life”.

David Frye was a comedian and impressionist who specialized in taking off famous American politicians. The list of celebrities that Frye impersonated included Presidents Johnson and Nixon, and Senators Hubert Humphrey and Robert Kennedy.

Ulan-ude is a city in Eastern Siberia that was founded by the Russian Cossacks. If you ever get to visit, you’ll be able to see a huge sculpture of the head of Vladimir Lenin, the largest head of Lenin ever built.