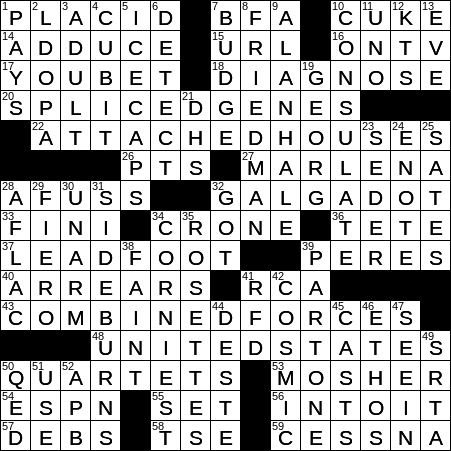 Today’s Theme (according to Bill): Attachments

Themed clues are “attached” nouns that point to common phrases that start with synonyms of “attached”:

“To adduce” is to cite as an example or as a means of proof.

16 Where “Star Trek” and “Mission: Impossible” originated : ON TV

The original “Star Trek” TV show opened each episode with a speech from Captain Kirk, played by William Shatner:

Space: the final frontier. These are the voyages of the starship Enterprise. Its five-year mission: to explore strange new worlds, to seek out new life and new civilizations, to boldly go where no man has gone before.

The “Mission: Impossible” TV show featured the following line close to the start of each episode:

As always, should you or any of your I.M. Force be caught or killed, the Secretary will disavow any knowledge of your actions.

And then the tape self-destructed. Great stuff …

“Match Game” is a television game show that had many incarnations. The original run was from 1962 until 1969, and it came back in varying formats several times after that. The best-known host of the show was Gene Rayburn. The most recent is Alec Baldwin, starting in 2016.

27 “Days of Our Lives” role for more than four decades : MARLENA

Deidre Hall is the actress who played Dr. Marlena Evans on the soap opera “Days of Our Lives” since 1976.

“Fini” is French for “finished”.

The English word “head” translates into French as “tête”, and into German as “Kopf”.

41 Co. that once had a lightning bolt in its logo : RCA

50 The Beatles and the Monkees : QUARTETS

Eugene V. Debs was an American union leader who ran as a candidate for US President in 5 elections from 1900 through 1920. Debs was a dedicated socialist and ran as a member of the Social Democratic Party, and later the Socialist Party of America.

The Cessna Aircraft manufacturing company was founded in 1911 by Clyde Cessna, a farmer from Kansas. Cessna is headquartered in Wichita and today has over 8,000 employees.

The name of the drug L-3,4-DihydrOxyPhenylAlanine can be shortened, thankfully, to L-DOPA. Swedish scientist Arvid Carlsson won a Nobel Prize for showing that L-DOPA could be used to reduce the symptoms of Parkinson’s Syndrome.

5 The ends of the earth : ICE CAPS

10 Place to get a passport : CONSULATE

As a result of a League of Nations conference in 1920, passports are usually written in French and one other language. French was specified back then as it was deemed the language of diplomacy. US passports use French and English, given that English is the nation’s de facto national language. Spanish was added as a language for US passports in the late nineties in recognition of Spanish-speaking Puerto Rico.

“El Diario” is a common name for a newspaper in Spanish-speaking countries. The name translates into English as “The Daily”.

“Killing Eve” is a spy thriller series about an MI5 agent on the trail of a female assassin. The agent is played by Canadian actress Sandra Oh, and the assassin by English actress Jodie Comer. The storyline comes from a series of novellas titles “Codename Villanelle” by British author Luke Jennings.

The Book of Exodus is the second book in the Bible, and deals with Moses leading the Hebrews out of Egypt. The name “Exodus” comes from the Greek “exodos” meaning “departure”.

31 Elvis had big ones : SIDEBURNS

Ambrose Burnside was a Union Army general during the Civil War, and a successful businessman. When the National Rifle Association was formed in 1871, Burnside was chosen as the organization’s first president. Burnside was also noted for the very lush growth of hair on his face and the distinctive style in which he cut it. We now know that style of cut as “sideburns”, a term derived from the Burnside name. When sideburns connect with the mustache, they might be termed “mutton chops”, a reference to their similarity in shape to the cut of meat.

The Villa d’Este is a beautiful Renaissance villa situated close to Tivoli near Rome, Italy. It was built by Cardinal Ippolito d’Este, the son of Alfonso I d’Este and Lucrezia Borgia.