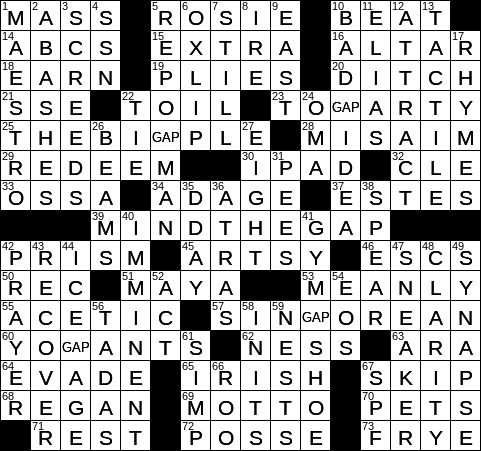 We have a pseudo-rebus puzzle today, with the letters GAP appearing in some squares. Those letters are included in across-answers, but are skipped over in down-answers:

Amazing Grace, How sweet the sound
That saved a wretch like me
I once was lost, but now am found
T’was blind but now I see

Rob Estes is the actor who played Harry Wilson on the TV show “90210” and Kyle McBride on “Melrose Place”.

“Melrose Place” is a soap opera that originally aired from 1992 to 1999. “Melrose” was a spin-off of the hit show “Beverly Hills, 90210”. The show’s name comes from where the story is set, in an apartment complex with the address of 4616 Melrose Place in West Hollywood, California. “Melrose Place” was rebooted in 2009 (and some called “Melrose Place 2.0”, but was canceled after just one season.

39 Underground warning … or a warning about four squares in this grid : MIND THE GAP

When light passes through a prism, it splits up (disperses) into differing wavelengths. It then becomes clear that white light is actually a mixture of different colors, which show up as beautiful spectrum.

57 Native of the Lion City : SINGAPOREAN

65 Like Andrew Jackson and James Buchanan, by heritage : IRISH

Like many of the earlier US presidents, Andrew Jackson was a career military man. Jackson distinguished himself as commander of American forces during the War of 1812, particularly in the defense of New Orleans. He had a reputation of being fair to his troops, but strict. It was during this time that he was described as “tough as old hickory”, giving rise to the nickname “Old Hickory” that stuck with him for life.

James Buchanan was US President just prior to the Civil War. He was the only president from the state of Pennsylvania, and also the only president who remained a bachelor for the whole of his life. As he was unmarried, Buchanan’s niece Harriet Lane acted as First Lady. Buchanan earned the nickname “Ten-Cent Jimmie” during the 1856 presidential election campaign, as he famously claimed that ten cents a day was enough for a working man to live on.

A screed is a long speech or piece of writing, one that is often full of anger and emotion.

In the world of television, prime time is that part of the day when networks and advertisers bring maximize revenues due to the high number of viewers. Prime time is often defined as 7-10 p.m. Mountain and Central Time, and 8-11 p.m. Pacific and Eastern Time.

35 An exhibit at F.D.R.’s presidential library is dedicated to it : D-DAY

49 It may get fired because of a thought : SYNAPSE