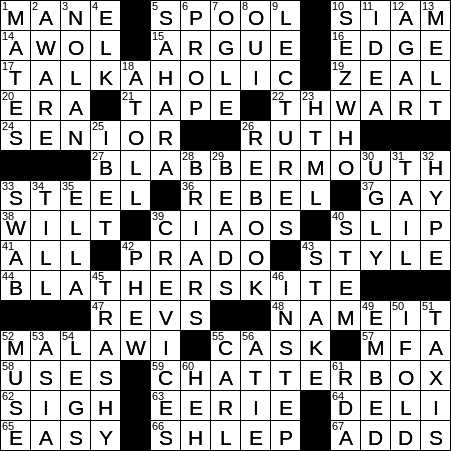 Today’s Theme (according to Bill): One Who Yaks, Yaks, Yaks …

Themed clues are all the same, namely “One who yaks, yaks, yaks …”

33 Product Pittsburgh is famous for : STEEL

The pennsylvania city of Pittsburgh was named in 1758 for British statesman and future prime minister William Pitt the Elder. Originally known as Fort Duquesne, the settlement was renamed after it was captured from the French during the Seven Years’ War. The most commonly used nicknames for Pittsburgh are “Steel City”, referring to the history of steel-related industry, and “City of Bridges”, referring to the 446 bridges in the metropolis.

36 One fighting the status quo : REBEL

Wilt Chamberlain was one of the best basketball players of all time, certainly based on the number of records that he still holds. Chamberlain is the only player to have scored 100 points in a single NBA game, and the only player to average more than 40 points in a season. He was given many nicknames during his career, but the one that he preferred was “the Big Dipper”, a reference to his need to dip his head to pass his 7ft 1in frame through doorways.

39 Hellos and goodbyes, in Italy : CIAOS

4 Member of a benevolent order : ELK

43 Something stuck through a vampire’s heart : STAKE

Legends about vampires were particularly common in Eastern Europe and in the Balkans in particular. The superstition was that vampires could be killed using a wooden stake, with the preferred type of wood varying from place to place. Superstition also defined where in the body should be staked. Most often, the stake was driven through the heart, but Russians and northern Germans went for the mouth, and northeastern Serbs for the stomach.