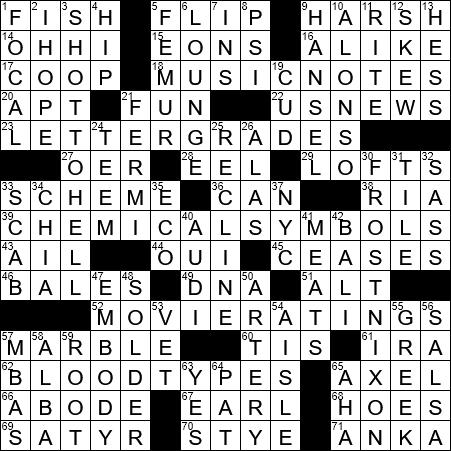 8. It comes between chi and omega : PSI

Psi is 23rd letter in the Greek alphabet, and the one that looks a bit like a trident or a pitchfork.

9. Fairy tale character who leaves a trail of bread crumbs in the forest : HANSEL

In William Shakespeare’s play “The Tempest”, Alonso is the King of Naples. Alonso helps Antonio to depose his brother Prospero as Duke of Milan and set him adrift in a boat with Prospero’s young daughter Miranda.

A Jewish girl becomes a Bat Mitzvah at 12 years of age, the age at which she becomes responsible for her actions. Boys become Bar Mitzvahs at 13. The terms translate into English as daughter and son of the commandments.

The Hess Corporation is an oil company based in New York City. In 1964, the company started selling toy trucks with the Hess logo on them, in Hess gas stations. The company has been selling them every since, bringing out new models just before Christmas. Hess toy trucks have become quite collectible and the old ones can fetch a pretty penny.

Ruminants are animals that “chew the cud”. Ruminants eat vegetable matter but cannot extract any nutritional value from cellulose without the help of microbes in the gut. Ruminants collect roughage in the first part of the alimentary canal, allowing microbes to work on it. The partially digested material (the cud) is regurgitated into the mouth so that the ruminant can chew the food more completely exposing more surface area for microbes to do their work. We also use the verb “to ruminate” in a figurative sense, to mean “to muse, ponder, chew over”.

30. Play and film about a 1977 series of interviews with a former president : FROST/NIXON

The British journalist David Frost is perhaps best known in the US for hosting the television show “Through the Keyhole” and for his celebrity interviews, most notably with former President Richard Nixon. That interview was adapted as a play and then a movie called “Frost/Nixon”. The movie was directed by Ron Howard. “Frost/Nixon” is a little slow, but it is a must see for political history addicts like me.

Chia is a flowering plant in the mint family. Chia seeds are an excellent food source and are often added to breakfast cereals and energy bars. There is also the famous Chia Pet, an invention of a San Francisco company. Chia Pets are terracotta figurines to which are applied moistened chia seeds. The seeds sprout and the seedlings become the “fur” of the Chia Pet.

40. Car with the slogan “Truth in engineering” : AUDI

In most countries around the world, Audi uses its corporate tagline in advertising, namely “Vorsprung durch Technik” (which translates as “Advancement through Technology”). However, the literal translation from the German has been dropped for the US market, in favor of “Truth in Engineering”.

Actress Jessica Alba got her big break when she was cast in the Fox science fiction show “Dark Angel”. Alba had a tough life growing up as she spent a lot of time in hospital and so found it difficult to develop friendships. As a youngster she twice had a collapsed lung, frequently caught pneumonia, suffered from asthma, had a ruptured appendix and a tonsillar cyst. On top of all that she acknowledges that she suffered from obsessive-compulsive disorder as a child. It seems that she has really turned her life around …