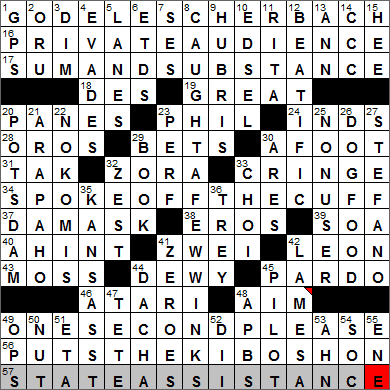 Today’s Wiki-est, Amazonian Googlies
Across
1. Title trio of a 1980 Pulitzer winner : GODEL, ESCHER, BACH
Douglas Hofstadter is an American academic, and a winner of a Pulitzer Prize for his book “Gödel, Escher, Bach: An Eternal Golden Braid”, first published in 1979.

23. “Cool dad” on “Modern Family” : PHIL
The character Phil Dunphy on the sitcom “Modern Family” is played by actor Ty Burrell. Phil is a real estate agent and refers to his role in his family as “cool Dad”.

The song “Auld Lang Syne” is a staple at New Year’s Eve, the words of which were written by Scottish poet Robbie Burns. The literal translation of “Auld Lang Syne” is “old long since”, but is better translated as “old times”. The sentiment of the song is “for old time’s sake”.

32. First name in Harlem Renaissance literature : ZORA
Zora Neale Hurston was an American author, most famous for her 1937 novel “Their Eyes Were Watching God”. Like the author, the main character in the novel is an African American woman, a part played by Halle Berry in a television movie adaptation that first aired in 2005.

34. Winged it : SPOKE OFF THE CUFF
To speak “off the cuff” is to speak extemporaneously. The idea is that a person doing so would not be using learned line, but rather is speaking with the use of a few notes that have jotted on his cuffs or shirt sleeves.

37. Napkin material : DAMASK
Damask was originally a weaving technique associated with the Byzantine and Islamic weaving centers of the Middle Ages. “Damask” comes from the name of Damascus which was a major trading city at that time.

45. Longtime late-night announcer : PARDO
Don Pardo’s distinctive voice announces the show “Saturday Night Live, and has been doing so since the premiere episode that aired in 1975. Pardo has been the announcer for all the SNL shows except for the 1981-82 season. Pardo retired from NBC in 2004 and moved to Tucson, Arizona, but the producers of “Saturday Night Live” persuaded him to stay on as announcer for their show. He has a lifetime contract, one of only two people ever to have such an arrangement with NBC (the other was Bob Hope!). Pardo is still doing the job and celebrated his 90th birthday on air, blowing out candles on his birthday cake at the end of an episode of SNL.

46. Breakout company of 1976 : ATARI
At one point, the electronics and video game manufacturer Atari was the fastest growing company in US history. However, Atari never really recovered from the video game industry crash of 1983.

56. Vetoes : PUTS THE KIBOSH ON
“Kibosh” is something that constrains or checks. “Kibosh” looks like a Yiddish word but it isn’t, and is more likely English slang from the early 1800s.

Down
1. It might tell you where to get off : GPS
GPS stands for Global Positioning System. The modern GPS system that we use today was built by the US military who received the massive funding needed because of fears during the Cold War of the use of Intercontinental Ballistic Missiles. We civilians all round the world owe a lot to President Ronald Reagan because he directed the military to make GPS technology available to the public for the common good. President Reagan was moved to do so after the Soviet Union shot down KAL flight 007 carrying 269 people, just because the plane strayed accidentally into Soviet airspace.

2. Sch. founded by a Pentecostal preacher : ORU
Oral Roberts University (ORU) is a private school in Tulsa, Oklahoma. ORU was founded relatively recently, in 1963 by the late evangelist Oral Roberts.

The Idlewild Golf Course was taken over by the city of New York in 1943 and construction started on a new airport to serve the metropolis and relieve congestion at La Guardia. The Idlewild name still persists, even though the airport was named after Major General Alexander E. Anderson from the first days of the project. When the facility started operating in 1948 it was known as New York International Airport, Anderson Field. It was renamed to John F. Kennedy International Airport in 1963, one month after the President was assassinated.

9. Self-confidence to a fault : HUBRIS
“Hubris” is arrogance or overbearing pride. The term is rooted in the Greek “hybris”, a term that originally was used to describe “presumption toward the gods”.

10. Vehicular bomb? : EDSEL
The Edsel brand of automobile was named for Edsel, son of Henry Ford. Sadly, the name “Edsel” has become synonymous with “failure”, which was no fault of Edsel himself who had died several years before the Edsel line was introduced.

11. Romance novelist’s award : RITA
The RITA Awards are presented by Romance Writers of America (RWA) to authors exhibiting excellence in the genre of romantic fiction. The RITA is named for the RWA’s first president, Rita Clay Estrada.

13. One of the Romneys : ANN
Ann Davies knew Mitt Romney way back in elementary school, and the pair started dating when Ann was 16 and were married in 1968 when she was 19 years old. Ann Romney was diagnosed with multiple sclerosis in 1998, and she has been very active with the National Multiple Sclerosis Society.

14. New Deal inits. : CCC
The Civilian Conservation Corps (CCC) was a work relief program that was part of President Roosevelt’s New Deal. The idea behind the program was to provide employment for young men who could not find work elsewhere. These young men provided manual labor for the conservation and development of natural resources owned by various levels of government.

20. Home of Sanssouci Palace : POTSDAM
Potsdam is a city in Germany that lies just on the outskirts of the nation’s capital of Berlin. Famously, Potsdam was the site of a conference between Stalin, Churchill and Truman after the end of WWII in Europe.

Sanssouci is a magnificent palace in Potsdam near Berlin. It is the former summer home of Frederick the Great, King of Prussia. Sanssouci is often compared with the Palace of Versailles outside of Paris, although it is a much smaller estate and collection of buildings. The name of the palace comes from the French “sans souci” meaning “without concern, worries”, an indication that Sanssouci was built as a retreat for Frederick, and was not a seat of power.

By the shores of Gitche Gumee,
By the shining Big-Sea-Water,
Stood the wigwam of Nokomis,
Daughter of the Moon, Nokomis.

26. Lab growth need : DOG FOOD
The Labrador breed of dog has been around at least since 1814, and the chocolate Labrador appeared over a century later in the 1930s.

30. Father of 38-Across : ARES
The Greek god Ares is often referred to as the Olympian god of warfare, but originally he was regarded as the god of blood-lust and slaughter. Ares united with Aphrodite to create several gods, including Phobos, Deimos and Eros. The Roman equivalent to Ares was Mars.

32. Limoncello ingredient : ZEST
Limoncello is a rather tasty lemon liqueur that is mostly associated with Southern Italy. I’ve come across California-made limoncello quite a lot in recent years …

33. K. J. ___, 2011 Players Championship champion : CHOI
Choi Kyung-Ju is a professional golfer from South Korea who plays on the PGA tour, although he is better known in the west as K. J. Choi. Choi has won enough tournaments worldwide to make him the most successful golfer from the whole of Asia.

35. Univ. in Manhattan : KANSAS ST
Kansas State University (KSU) was founded as the Kansas State Agricultural College in 1863 during the Civil War. The main KSU campus is located in Manhattan, Kansas.

36. Smaller cousin of a four-in-hand? : TREY
A trey of clubs, for example, is a name for the three of clubs in a deck of cards. The name “trey” can also be used for a domino with three pips.

42. San Diego suburb : LA MESA
One of the most famous residents of La Mesa, a suburb of San Diego, California, was the actor Dennis Hopper.

44. Russian retreat : DACHA
Dachas are usually second homes in Russia and the former Soviet Union that are located outside the city limits in rural areas. Residents/tenants of dachas are often called dachniks.

45. One trying to avoid a banking crisis? : PILOT
A guess a pilot wouldn’t want to bank his or her plane too radically …

48. They’re issued to cruisers, briefly : APBS
An All Points Bulletin (APB) is a broadcast from one US law enforcement agency to another.

51. It’s H-shaped : ETA
Eta is the seventh letter of the Greek alphabet, and is a forerunner of our Latin character “H”.

53. “Kung Fu” actor Philip : AHN
The actor Philip Ahn is perhaps best known for playing Master Kahn, one of Caine’s teachers on the television show “kung Fu”. Ahn was the first Asian-American actor to receive a star on the Hollywood Walk of Fame.

54. Part of U.S.S.R.: Abbr. : SOC
The former Soviet Union, the Union of Soviet Socialist Republics (USSR), was created in 1922, not long after the Russian Revolution of 1917 that overthrew the Tsar. Geographically, the new Soviet Union was roughly equivalent to the old Russian Empire, and was comprised of fifteen Soviet Socialist Republics (SSRs).