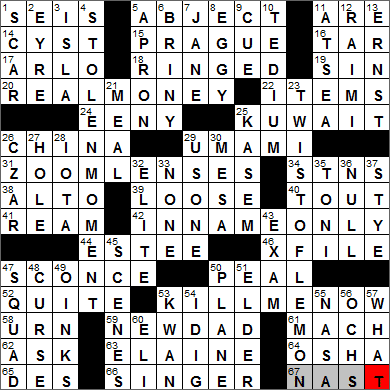 CROSSWORD SETTER: Erik Wennstrom
THEME: Twist of Lemon … each of today’s themed answers includes an anagram/twist of the word LEMON:

20A. *What paper profits aren’t : REAL MONEY
31A. *Photo gear with variable focal lengths : ZOOM LENSES
42A. *Titularly : IN NAME ONLY
53A. *Sarcastic remark upon hearing bad news : KILL ME NOW
4D. *Precious, brief time with a loved one : STOLEN MOMENT

23D. Drink garnish … or a hint to five letters in the answer to each starred clue : TWIST OF LEMON

11. “We ___ the 99%” : ARE
“We are the 99%” is a slogan for the Occupy movement, the international protest against social and economic inequality. The ultimate source of the phrase was an article in “Rolling Stone” magazine that suggested the Occupy movement represented the 99%.

15. Capital on the Vltava River : PRAGUE
The beautiful city of Prague is today the capital of the Czech Republic. Prague’s prominence in Europe has come and gone over the centuries. For many years it was the capital city of the Holy Roman Empire.

16. ___ Heels (college team) : TAR
Tar Heel is a nickname for anyone living in, or from, the state of North Carolina. As such, it is the nickname also of the athletic teams of the University of North Carolina. No one seems to know for sure where the term “Tar Heel” originated, but it is thought to be related to the historical importance of the tar, pitch and turpentine industries that thrived in the state due to the presence of vast forests of pine trees.

17. First name in folk : ARLO
Arlo Guthrie is the son of Woody Guthrie. Both father and son are renowned for their singing of protest songs about social injustice. Arlo is most famous for his epic “Alice’s Restaurant Massacree”, a song that lasts a full 18m 34s. In the song Guthrie tells how, after being drafted, he was rejected for service in the Vietnam War based on his criminal record. He had only one incident on his public record, a Thanksgiving Day arrest for littering and being a public nuisance when he was 18-years-old.

18. Like a raccoon’s tail : RINGED
The raccoon is native to North America. In captivity, raccoons can live to over 20 years of age, but in the wild they only live two or three years. The main causes for the shorter lifespan are hunting and road traffic.

25. Oil-rich nation invaded in 1990 : KUWAIT
The State of Kuwait sits at the northern tip of the Persian Gulf, famously sharing a border to the north with Iraq. After WWI, Kuwait was a Protectorate within the British Empire and then gained independence from the UK in 1961. Iraq annexed Kuwait in 1990, which led to the Gulf War of 1990-1991.

29. Taste whose name means “savoriness” in Japanese : UMAMI
Umami is one of the five basic tastes, along with sweet, sour, bitter and salty. “Umami” is a Japanese word used to describe “a pleasant savory taste”. Umami was proposed as a basic taste in 1908, but it wasn’t until 1985 that the scientific community finally accepted it as such.

34. Metro map points: Abbr. : STNS
The Paris Métro is the busiest underground transportation system in western Europe, carrying about 4.5 million passengers a day, about the same as the New York City Subway. The system took its name from the company that originally operated it: “La Compagnie du chemin de fer métropolitain de Paris”, which was shorted to “Métro”. The term “Metro” was then adopted for similar systems in cities all over the world.

38. Kind of clef : ALTO
Clef is the French word for “key”. In music, a clef is used to indicate the pitch of the notes written on the stave.

41. Berate, with “out” : REAM
I must admit that I find the slang term “to ream”, with its meaning “to scold harshly”, to be quite distasteful. The usage of the word as a reprimand dates back to about 1950.

44. Lauder of cosmetics : ESTEE
Estée Lauder was quite the successful businesswoman, with a reputation as a great salesperson. Lauder introduced her own line of fragrances in 1953, a bath oil called “Youth Dew”. “Youth Dew” was marketed as a perfume, but it was added to bathwater. All of a sudden women were pouring whole bottles of Ms. Lauder’s “perfume” into their baths while using only a drop or two of French perfumes behind their ears. That’s quite a difference in sales volume …

46. Case for Scully and Mulder : X-FILE
“The X-Files” is a very successful science fiction show that aired on the Fox network from 1993 to 2002. The stars of the show are David Duchovny (playing Fox Mulder) and the very talented Gillian Anderson (playing Dana Scully). By the time the series ended, it was the longest running sci-fi show in US broadcast history.

47. Torch holder : SCONCE
A sconce is a light fixture that today uses electric bulbs, but in the past used candles and torches. The defining feature of a sconce is that it is supported by a wall and does not have a base that stands on the ground. Usually the light is indirect, projected upwards towards the ceiling.

50. Big Ben sound : PEAL
Big Ben is the name commonly used for the large bell in the Clock Tower of the Palace of Westminster (aka the Houses of Parliament). Big Ben’s official name is the Great Bell, and there is some debate about the origins of the nickname. It may be named after Sir Benjamin Hall who oversaw the bell’s installation, or perhaps the English heavyweight champion of the day, Benjamin Caunt.

63. “Seinfeld” woman : ELAINE
The character called Elaine Benes, unlike Jerry, Kramer and George, did not appear in the pilot episode of “Seinfeld”. NBC executives specified the addition of a female lead when they picked up the show citing that the situation was too “male-centric”.

64. Hazmat-monitoring org. : OSHA
The Occupational Safety and Health Administration (OSHA) was created in 1970 during the Nixon administration. OSHA regulates workplaces in the private sector and regulates just one government agency, namely the US Postal Service.

Dangerous goods are commonly referred to as hazardous materials, or HazMat. People working with dangerous goods might wear a HazMat suit.

66. Bing Crosby or David Crosby : SINGER
The singer Bing Crosby was a great lover of the game of golf. Crosby had just finished up 18 holes on a course in Spain in 1977 when he suffered a massive heart attack on the final green. Crosby’s last words were “That was a great game of golf, fellas.”

Singer David Crosby has a great solo career, but also was a founding member of three bands: the Byrds; Crosby, Stills & Nash; and CPR.

7. With 2-Down, book that includes the line “Conventionality is not morality” : JANE
(2D. See 7-Down : EYRE)
“Jane Eyre” is of course the novel written by Charlotte Brontë, under the pen name Currer Bell. Over the years, I’ve shared here on my blogs that the “Jane Eyre” story line is a little too dark and Gothic for my taste, but a very persuasive blog reader convinced me to look more at the romantic side of the story and give it a second chance. I watched a wonderful 4-hour television adaptation of the novel made by the BBC a while back and I have to say that because I was focused on the relationship between Jane and Rochester, I was able to push past the Gothic influences (that depress me) so I really enjoyed the story. I thoroughly recommend the 2006 BBC adaptation to fans of the novel.

8. Like a soufflé : EGGY
A soufflé is of course a French dish, usually served as a dessert. The verb “souffler” means “to blow, blow up”.

11. Where hurricanes originate : AT SEA
A hurricane (or typhoon) is a severe form of tropical cycle. Tropical cyclones form over warm water, picking up energy from the evaporation from the ocean surface.

12. “Spider-Man” director Sam : RAIMI
Sam Raimi is a very successful director and producer, responsible for the “Spider-Man” series of films among others and TV series’ such as “Xena: Warrior Princess”.

13. With 61-Across, physicist who studied supersonics : ERNST
(61A. See 13-Down : MACH)
The Mach number of a moving object (like say an airplane) is it’s speed relative to the speed of sound. A plane travelling at Mach 2, for example, is moving at twice the speed of sound. The term “Mach” takes its name from the Austrian physicist Ernst Mach who published a groundbreaking paper in 1877 that even predicted the “sonic boom”.

25. Casey of “American Top 40” : KASEM
Not only is Casey Kasem so closely associated with the radio show “American Top 40”, but he is also well known for playing the voice of Shaggy Rogers on the “Scooby-Doo” animated series.

26. Executive branch V.I.P. : CZAR
The term czar (also tsar) is a Slavic word that was first used as a title by Simeon I of Bulgaria in 913 AD. “Czar” is derived from the word “Caesar”, which was synonymous with “emperor” at that time. We use the term today as an informal title for high-level government officials e.g. drug czar, energy czar.

28. I as in Ilium? : IOTA
Iota is the ninth letter in the Greek alphabet. We use the word “iota” to portray something very small as it is the smallest of all Greek letters.

Ilium is an alternative name for the city of Troy, giving us the title of Homer’s epic poem “Iliad”.

29. Rte. with a terminus in Key West, Fla. : US-ONE
US Route 1 runs from Fort Kent in Maine right down to Key West in Florida.

30. Natural table : MESA
“Mesa” is the Spanish for “table” and is of course is how we get the term “mesa” that describes a geographic feature. “What’s the difference between a butte and a mesa?” I hear you cry! Both are hills with flat tops, but a mesa has a top that is wider than it is tall. A butte is a much narrower formation, taller than it is wide.

50. Hughes’s Spruce Goose, e.g. : PLANE
The “Spruce Goose” is the familiar name given to the Hughes H-4 Hercules heavy transport plane, just one example of which was ever constructed. As the plane was built during WWII, wood was used instead of aluminum due to a shortage of the metal. That actual wood used was birch, but critics still used “Spruce Goose” as the name had a better ring to it. The Hercules has the largest wingspan of any aircraft ever built. You can go see it at the Evergreen Aviation Museum in McMinnville, Oregon.

53. Olympic skater Michelle : KWAN
Michelle Kwan is perhaps the most successful American figure skater in history. As well as being an Olympic medalist twice, World champion five times, Kwan was US champion a record nine times.

55. Friendship org. of 1962 : NASA
Astronaut John Glenn was the first American to orbit the earth. He did so in 1962 as part of NASA’s Project Mercury. Glenn’s Mercury spacecraft was named Friendship 7.

56. Phil who sang “Draft Dodger Rag” : OCHS
Phil Ochs was an American protest singer, active in the days of the Vietnam War.