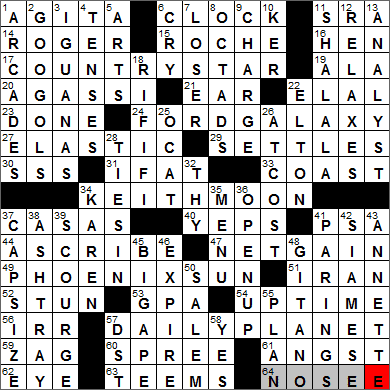 CROSSWORD SETTER: Alan Arbesfeld
THEME: Astronomical Finish … the last word in each of today’s themed clues is a body (or group of bodies) found in space:

Madrid is the largest city in Spain and the capital. Madrid is located very close to the geographic center of the country.

14. “Understood,” to a radioer : ROGER
The term “roger”, meaning “yes” or “acknowledged”, comes from the world of radiotelephony. The British military used a phonetic alphabet in the fifties that included “Roger” to represent the letter “R”. As such, it became customary to say “Roger” when acknowledging a message, with R (Roger) standing for “received”.

15. Drug company that makes Valium : ROCHE
The giant pharmaceutical and medical diagnostics company Hoffmann-La Roche is based in Basel, Switzerland. The company was founded back in 1896 by Fritz Hoffmann-La Roche, and initially produced vitamins.

The generic name for Valium is diazepam. It was developed by Dr. Leo Sternbach of Hoffman-La Roche, and approved for use in 1963. This was the second of Dr. Sternbach’s major developments, as he was responsible for the diazepam’s sister drug, Librium, that went to market in 1960.

17. Randy Travis or Travis Tritt : COUNTRY STAR
Randy Travis is a country singer, and since the mid-nineties, a sometime actor. Starting in 1999, Travis’s recording focus has been gospel music.

Travis Tritt is a country singer from Marietta, Georgia.

19. Chicken ___ king : A LA
A dish prepared “a la king” (usually chicken or turkey), is food prepared in a cream sauce, with mushrooms, pimentos, green peppers and sherry.

20. Tennis great Andre : AGASSI
Renowned tennis professional Andre Agassi wrote an autobiography called “Open”, published in 2009. An amazing revelation in the book is that Agassi’s famous head of hair was actually a wig for much of his playing career. Can you imagine how hard it must have been to play tennis at his level with a rug stuck on?

21. “Wing” for Dumbo : EAR
The 1941 Disney animated film “Dumbo” was made soon a year after the feature “Fantasia”. “Dumbo” was largely a commercial venture. The film was made quickly and released in theaters as soon as possible, the idea being to recoup the financial losses incurred by “Fantasia”.

22. Airline that doesn’t fly on the Sabbath : EL AL
El Al Israel Airlines is the flag carrier of Israel. The term “el al” translates from Hebrew as “to the skies”.

24. Minivan since the mid-’90s : FORD GALAXY
The Ford Galaxy minivan was introduced in 1995 and in now being produced in a 3rd-generation version. The first generation Galaxy was developed as a joint venture between Ford and Volkswagen.

30. ’60s draft org. : SSS
The US government maintains information on all males who are potentially subject to military conscription, using what is called the Selective Service System (SSS). In the event that a draft was held, men registered would be classified into groups to determine eligibility for service. Class 1-A registrants are those available for unrestricted military service. Other classes are 1-A-O (conscientious objector available for noncombatant service), 4-A (registrant who has completed military service) and 4-D (Minister of religion).

34. Drummer for the Who : KEITH MOON
Keith Moon was the drummer for the Who, the famous rock group from England. Moon was a “bit of a lad” offstage and seemed to have a fixation for destroying televisions and exploding toilets in hotel rooms with cherry bombs. He also was fond of alcohol, with a particular taste for brandy and champagne. Ironically, Moon died due to an overdose of a drug designed to curb alcohol abuse, when he was just 32 years old. He was found dead in a London flat owned by Harry Nilsson. Mama Cass Elliot had been found dead in the same flat four years earlier.

49. Arizona N.B.A.’er : PHOENIX SUN
The Phoenix Suns NBA team are in the Pacific Division, and are the only team in that division not based in California.

51. Tehran’s land : IRAN
Tehran is the capital of Iran and is the largest city in the Middle East, with a population of about 8.5 million. Iran has been around an awful long time and Tehran is actually the country’s 31st national capital.

57. Clark Kent and Lois Lane’s paper : DAILY PLANET
Lois Lane has been the love interest of Superman/Clark Kent since the comic series was first published in 1938. Lois and Clark both work for the big newspaper in the city of Metropolis called “The Daily Planet”. The couple finally got hitched in the comics (and on television’s “Lois and Clark”) in 1996. But never mind all that … one has to wonder how good the crossword is in “The Daily Planet” …

Down
1. Pinball parlors : ARCADES
Our modern game of pinball evolved from an earlier table game called bagatelle which used balls, pins and holes (and I remember playing bagatelle as boy in a pub in Ireland). The first “pinball” machine was made by a British inventor who settled in Cincinnati, Ohio. He modified the game of bagatelle, adding a coiled spring and a plunger to introduce balls at the end of the table, a device that is still in use today. From there manufacturers developed coin-operated versions of pinball, which became popular during the depression as they provided a little entertainment for a few pennies. One distributor of the coin-operated pinball machines started manufacturing them himself as he couldn’t source new games fast enough. He called his pinball game Ballyhoo, and eventually named his company Bally, a brand name well known in the gambling industry to this day.

2. Humongous numbers : GOOGOLS
A googol is a pretty big number, 10 to the power of 100. That would be the digit 1 followed by 100 zeros. The search engine “Google” was originally called “BackRub” would you believe? The name was eventually changed to Google, an intentional misspelling of the word “googol”.

11. Song syllables in the title of a 1964 hit : SHA-LA-LA
“Sha-la-la” was a hit for the British band Manfred Mann in 1964. It was a cover version of a song released earlier in the same year by the Shirelles over in the US.

18. Classic 1955 Jules Dassin heist film : RIFIFI
“Rififi” is a French crime film that was released in 1955, and adaption of a novel by Auguste Le Breton. “Rififi” was directed by American Jules Dassin who ended up working in France after being blacklisted in Hollywood.

22. John who sang “Rocket Man” : ELTON
Elton John’s 1972 hit “Rocket Man” was inspired by a short story of the same name written by Ray Bradbury. It’s a great song, that tells the story of an astronaut heading out for a “routine” space mission.

32. “___ will be done” (Lord’s Prayer phrase) : THY
The Lord’s Prayer is a central prayer in Christian religions, and is found in two places in the New Testament. In the version in the Gospel of Matthew the last line of the prayer is “deliver from evil”. In the Gospel of Luke the last line is “lead us not into temptation”. The last words of the prayer as it most often said today are:

34. Singer Carpenter : KAREN
Karen Carpenter was an accomplished drummer, although she only started playing drums in high school, as a member of the school band. After she graduated she started playing jazz with her brother, Richard, and a college friend. Later, she and Richard played with a group called Spectrum, and submitted many demo tapes to recording companies, but all were unsuccessful. Finally, Karen and Richard got a recording contract with A&M Records, and when they had Karen take the lead on their songs, they hit the big time and toured as the Carpenters. Sadly, of course, Karen passed away at only 32-years-old, dying from heart failure brought on by anorexia.

39. ___ of God (epithet for Attila the Hun) : SCOURGE
In his day, Attila the Hun was the most feared enemy of the Roman Empire, until he died in 453 AD. Attila was the leader of the Hunnic Empire of central Europe and was famous for invading much of the continent. However, he never directly attacked Rome.

42. Shorthaired cat : SIAMESE
The exact origins of the Siamese cat aren’t very clear, but it is believed to be from Southeast Asia. The Siamese takes its name from the sacred temple cats of Thailand (once called Siam).

43. Actress Bening of “American Beauty” : ANNETTE
The actress Annette Bening is from Topeka, Kansas. Bening has been married to actor Warren Beatty since 1992.

While I found “American Beauty” to be an enjoyable and interesting film (loved Annette Bening in it), I also found it very depressing. If you haven’t seen it, the main story is about a man having a midlife crisis (Kevin Spacey) and developing an infatuation for his teenage daughter’s flirtatious friend. Definitely worth watching, and it did get huge accolades when it was released in 1999. A blog reader kindly pointed out to me that that film’s title is a reference to the American Beauty rose. The rose features prominently in the sexual fantasy sequences, with the Kevin Spacey character dreaming about the young girl lying naked on a bed of rose petals.

45. Galoot : BIG APE
“Galoot” is an insulting term meaning an awkward or boorish man, an ape. “Galoot” comes from the nautical world, where it was originally what a sailor might call a soldier or marine.

48. Jordache jeans competitor : GITANO
Gitano is a brand of jeans sold by Kmart.

Jordache is an American clothing company that is noted for its designer jeans.

50. Oregon’s capital : SALEM
Salem is the state capital of Oregon. It is thought that the city takes its name from the older city of Salem, Massachusetts.

57. Summer hours: Abbr. : DST
On the other side of the Atlantic, Daylight Saving Time (DST) is known as “summer time”. The idea behind summer/daylight-savings is to move clocks forward an hour in spring and backwards in the fall so that afternoons have more daylight.