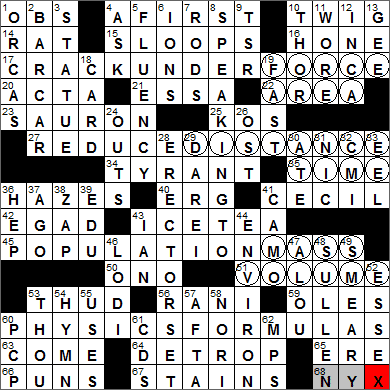 CROSSWORD SETTER: Timothy Polin
THEME: Ratios in Physics … the circled words in today’s grid are in pairs, and each pair is a physical unit “over” a physical unit, hence defining a ratio used in physics. The physical unit defined in each ratio is the word that completes the clue:

17A. With 22-Across, fail to cope with difficult circumstances : CRACK UNDER PRESSURE (Pressure = Force/Area)
27A. With 35-Across, highway sign meaning “slow down” : REDUCE SPEED (Speed = Distance/Time)
45A. With 51-Across, Monaco has the world’s highest : POPULATION DENSITY (Density = Mass/Volume)

60A. What the three sets of shaded squares in this puzzle represent : PHYSICS FORMULAS

Today’s Wiki-est, Amazonian Googlies
Across
1. Delivery specialists, for short : OBS
“Ob.” is an abbreviation for “obstetrics”.

15. Seagoing vessels : SLOOPS
Sloops and cutters are sailboats, and each has just one mast. One major difference between the two types of vessel is that the mast on a cutter is set much further aft than the mast on a sloop.

20. ___ Diurna (daily Roman notices) : ACTA
The Latin phrase “Acta Diurna” translates literally as “Daily Acts”, but is usually said to mean “Daily Public Records”. The Acta Diurna were official announcements carved in stone and displayed in the public places. These announcements were often the results of legal proceedings or trials. or noteworthy births, marriages or deaths.

41. British poet laureate ___ Day-Lewis : CECIL
Cecil Day-Lewis was an Irish poet from County Laois who was appointed Poet Laureate of the UK in 1968. Cecil has a famous son, the actor Daniel Day-Lewis.

50. The Yoko of “Oh Yoko!” : ONO
“Oh Yoko!” is a song written and performed by John Lennon in 1971, which appears on his iconic album “Imagine”. The title of course refers to Lennon’s wife, Yoko Ono.

66. Some Groucho Marx humor : PUNS
Groucho Marx’s real name was Julius Henry Marx. By the time Groucho started his successful, post-Hollywood career hosting the quiz show “You Bet Your Life”, he was sporting a real mustache. For all his movies, his mustache had been painted on with greasepaint.

68. Greek night goddess : NYX
In Greek mythology, Chaos was the first of the primeval gods born at the creation of the universe. Following Chaos came:

Down
1. Black-and-white threats : ORCAS
The taxonomic name for the killer whale is Orcinus orca. The use of the name “orca”, rather than “killer whale”, is becoming more and more common. The Latin word “Orcinus” means “belonging to Orcus”, with Orcus being the name for the Kingdom of the Dead.

7. Engine parts : RODS
In an internal combustion engine, it is the (connecting) rods which connect the pistons to the crankshaft.

10. Sif’s husband in myth : THOR
In Norse mythology, Sif was the goddess of the Earth. Sif was married to the thunder god Thor.

12. South America’s ___ Trail : INCA
The Inca Trail to Machu Picchu originates about 50 miles from Cuzco on the Urubamba River in Peru. It can take travelers about 5 days to trek the full length of the trail, passing through many Incan ruins before reaching the Sun Gate on Machu Picchu mountain. The trail was becoming greatly overused, forcing the Peruvian government to limit the number of people on the trail each day to 500. Book early …

13. Plowman’s command : GEE
“Haw!” is a command given to a trained animal that is hauling something (like a horse or an ox). “Haw!” is used to instruct the animal to turn to the left. The equivalent command for a right turn is “Gee!” Just to confuse things, the same commands are used in the British Isles but with the opposite meanings. That must be pretty unsettling for jet-setting plow horses …

28. Old A. C. Gilbert toy : ERECTOR SET
Oh how I loved my Erector Set as a kid. The version we used growing up was referred to as a Meccano set, as “Meccano” was the brand name used for for the toy sold as “Mechanics Made Easy”. The original Erector Set was developed by inventor Alfred Carlton Gilbert, and first produced in 1913. Back then it was sold as “The Erector/Structural Steel and Electro-Mechanical Builder”.

31. Actor Cage, informally : NIC
Nic Cage was born Nicolas Coppola. Cage is the nephew of director Francis Ford Coppola and actress Talia Shire, both of whom are his father’s siblings.

33. California’s ___ River : EEL
The Eel River in California was named in 1850 by an explorer Josiah Gregg after he made a trade with some Native Americans, swapping a frying pan for a large catch of eels.

36. What was cool in the ’50s? : HEP
The slang term “hep” meaning “cool” has the same meaning as the later derivative term “hip”. The origins of “hep” seem unclear, but it was adopted by jazz musicians of the early 1900s.

39. Follower of brown. or auburn. : EDU
Brown University, in Providence, Rhode Island, is one of the eight Ivy League schools. Brown has been around a long time, founded in 1764, years before America declared independence from England. The university took the name of Brown in 1804 after one Nicholas Brown, Jr. gave a substantial gift to the school.

Auburn University in Alabama was chartered in 1856, as the East Alabama Male College. The school was renamed when it was granted university status in 1960.

41. Hunting gear, informally : CAMO
Our term “camouflage” evolved directly from a Parisian slang term “camoufler” meaning “to disguise”. The term was first used in WWI, although the British navy at that time preferred the expression “dazzle-painting”.

43. Golfer Poulter : IAN
Ian Poulter is a golfer from England who for a while was ranked number five in the world.

44. Form a ring around : ENVIRON
“Environ” is the French word for “round” or “round about”.

46. City in New Jersey or California : LODI
Lodi, New Jersey was named in honor of the city of Lodi in Italy. One of Lodi’s claims to fame is that it is home to the Satin Dolls go-go bar, which was used for location shoots for the fictional Bada Bing bar in “The Sopranos”.

Lodi, California may not be as well known a wine producer as Sonoma and Napa counties, but has been given the moniker “Zinfandel Capital of the World”.

52. County bordering Cambridgeshire : ESSEX
Essex is a county in England, referred to as one of the “home counties”.

53. 10 benjamins : THOU
Benjamin Franklin is featured on one side of the hundred-dollar bill, and Philadelphia’s Independence Hall on the other side. There is a famous “error” in the image of Independence Hall. If you look closely at the clock face at the top of the building you can see that the “four” is written in Roman numerals as “IV” as perhaps one might expect. However, on the actual clock on Independence Hall, the “four” is denoted by “IIII”.

54. Canticle : HYMN
A canticle is a hymn which is taken from a biblical text other than the Psalms.

60. Hallucinogenic inits. : PCP
Phencyclidine is a recreational drug usually referred to on the street as PCP or “angel dust”.