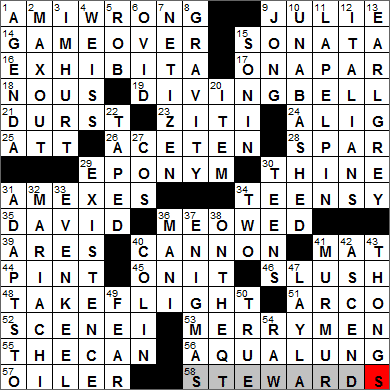 Today’s Wiki-est, Amazonian Googlies
Across
9. “Titus” director Taymor : JULIE
Julie Taymor is a director of movies, and of opera and theater productions. Taymor’s best known work is the stage musical “The Lion King”. She also directed William Shakespeare’s “Titus Andronicus” on the stage, and brought the play to the big screen as the 199 feature film “Titus”.

19. Relative of a bathysphere : DIVING BELL
A bathysphere is a submersible used in exploring the deep sea. The bathysphere is spherical in shape, so as to better resist the high pressure of deep waters. The term “bathysphere” comes from the Greek “bathus” and “sphaira” meaning “deep” and “sphere”. The vessel is simply lowered into the water on a strong cable.

21. Limp Bizkit frontman Fred : DURST
Fred Durst is the vocalist for the rock band Limp Bizkit. Durst chose the band’s name, and he was looking for something that turned people off. Sure enough, any record label interested in the band in its early days asked for a name change!

Limp Bizkit is described as a “nu metal” band, with nu metal being a subgenre of heavy metal. Limp Bizkit has been around since 1994, and that’s all I know …

23. Ingredient in some pastitsio : ZITI
Cylindrical pasta is known in general as “penne”, and there are many variants. For example, Ziti is a particularly large and long tube with square-cut ends.

Pastitsio is a baked pasta dish mainly from Greece, and is a version of the Italian dish known as pasticcio di pasta.

26. 21, in blackjack : ACE-TEN
The game of “twenty-one” was first referred to in a book by Cervantes, the author famous for writing “Don Quixote”. He called the game “ventiuna” (Spanish for “twenty-one”). Cervantes wrote his story just after the year 1600, so the game has been around at least since then. Twenty-one came to the US but it wasn’t all that popular so bonus payments were introduced to create more interest. One of the more attractive bonuses was a ten-to-one payout to a player who was dealt an ace of spades and a black jack. This bonus led to the game adopting the moniker “Blackjack”.

31. Some charge cards, informally : AMEXES
Amex is short for American Express. In dollar terms, there are more transactions conducted in the US using the Amex card than any other card.

35. Florentine tourist attraction : DAVID
When Michelangelo’s famous statue of David was unveiled in 1504, it was at a time when the city-state of the Florentine Republic was threatened by rival states (including Rome). The statue depicts David after he has decided to fight Goliath, and the subject is sporting what is described as a “warning glare”. David was originally placed outside the Palazzo della Signoria, the seat of government in Florence, and that warning glare was directed very deliberately in the direction of its enemy, namely Rome.

39. Bellicose figure : ARES
The Greek god Ares is often referred to as the Olympian god of warfare, but originally he was regarded as the god of blood-lust and slaughter. Ares united with Aphrodite to create several gods, including Phobos, Deimos and Eros. The Roman equivalent to Ares was Mars.

Something described as “bellicose” is warlike or hostile. The term derives from the Latin “bellum” meaning “war”.

44. Guinness measurement : PINT
Guinness is the most popular beer sold in Ireland. The beer is a stout and has that famous creamy white head, a result of mixing the beer with nitrogen as it is poured. You can also buy Guinness that has no nitrogen, which is sold under the name Guinness Export. This carbonated version of the beer has a very different taste, and is my personal favorite.

45. Kool & the Gang’s “Get Down ___” : ON IT
The band called Kool & the Gang has been around since the mid-sixties, and is most famous for the hit “Celebration”.

51. Instruction for a violinist : ARCO
“Arco” is a musical direction instructing a string player to return to normal bowing technique after a passage played using some other technique (perhaps pizzicato).

53. Hood’s support : MERRY MEN
Robin Hood is a figure from English folklore, celebrated in story and song. Some stories suggest that Robin Hood the outlaw was actually a real nobleman, the Earl of Huntington. Robin Hood’s famous companion was Maid Marian. Interestingly, the legend of Maid Marian (full name Lady Marian of Leaford) had been around for centuries before she became associated with Robin Hood starting in the 1700s.

55. Stir : THE CAN
The slang word “stir”, meaning a prison, probably has its roots in Start Newgate prison in London, where it was a nickname for the establishment.

56. Breather? : AQUALUNG
Jacques-Yves Cousteau started off his career in the French Navy, aiming for a working life in aviation. Because of a car accident, Cousteau had to abandon his first career choice and instead went to sea. Famously, he invented the Self Contained Underwater Breathing Apparatus (SCUBA), also called the aqualung.

57. Gretzky, for most of the 1980s : OILER
The National Hockey League’s Edmonton Oilers are so called because they are located in Alberta, Canada … oil country.

Wayne Gretzky is regarded by many as the greatest ever player of ice hockey, and indeed had the nickname “The Great One”.

Down
1. Big to-do, maybe? : AGENDA
“Agenda”is a Latin word that translates as “things to be done”, coming from the verb “agere” meaning “to do”.

4. Houdini’s real name : WEISS
Harry Houdini was the stage name of Hungarian-born escapologist and magician Erik Weisz (later changed to “Harry Weiss”). Many people are under the impression that Houdini died while performing an escape that went wrong, an impression created by the storyline in a couple of movies about his life. The truth is that he died of peritonitis from a burst appendix. It is also true that a few days prior to his death Houdini took a series of punches to his stomach as part of his act, but doctors believe that his appendix would have burst regardless.

6. J. M. W. Turner’s “___ Banished From Rome” : OVID
J. M. W. Turner was an English painter, notably of watercolor landscapes. Turner had an uncanny ability to portray light in his works, earning him the moniker “the painter of light”.

7. YouTuber, e.g. : NETIZEN
A netizen is an “Internet citizen”, someone with a presence on the Internet.

12. Many early 20th-century U.S. immigrants : ITALIANS
The highpoint of Italian immigration to the US was the 1910s when over two million immigrants arrived from Italy, About a third of this number eventually returned to their homeland, most working about five years in America.

13. Blend with bergamot : EARL GREY
The Earl Grey blend of tea is supposedly named after Charles Grey, 2nd Earl Grey who was Prime Minister of the UK from 1830 to 1834. Earl Grey tea has a distinctive flavor that is largely due to the addition of oil from the rind of the bergamot orange.

20. Gossip column subject : ITEM
An unmarried couple known to be involved with each other might appear in the gossip columns. This appearance as “an item” in the papers, led to the use of “item” to refer to such a couple, but only since the very early seventies. Brad Pitt and Angelina Jolie were an item in the gossip columns after they met on the set of the 2005 film “Mr. and Mrs. Smith”. Since then, they have unravelled their prior marriages and are now husband and wife with six children.

32. Style played on a guitarrón : MARIACHI
The name “Mariachi”, used for a typically Mexican popular band, is said to be a corruption of the French word for “marriage” (i.e. “mariage”). This perhaps dates back to the times of Napoleon II when France had political and cultural influence over Spain.

A guitarrón is a large guitar that is traditionally played in Mariachi bands.

40. Farrell of “In Bruges” : COLIN
Colin Farrell is a film actor from Dublin, Ireland. Farrell made a name for himself playing in action movies such as “Phone Booth”, “S.W.A.T.” and “The Recruit”.

“In Bruges” is a black comedy movie from 2008 starring Colin Farrell and Brendan Gleeson as two hitmen from Ireland roaming around the city of Bruges in Belgium. Despite the great cast and great location, I didn’t enjoy this one …

47. 1972 hit that begins “What’ll you do when you get lonely …?” : LAYLA
“Layla” is one of the great rock anthems of the seventies, released by Derek and the Dominos in December of 1970. It is a masterpiece of composition, with the first half of the song a great vehicle for the guitar-playing talents of Eric Clapton. The second half is a beautifully melodic piano coda (a coda … taking up half the length of the track!). To top things off we have the “unplugged” version recorded by Clapton in 1992, a fabulous and inventive variation on the original.

49. “___ leads to anger, anger leads to hate, hate leads to suffering”: Yoda : FEAR
Yoda is one of the most beloved characters in the “Star Wars” series of films. Yoda’s voice was provided by the great modern-day puppeteer Frank Oz of “Muppets” fame.