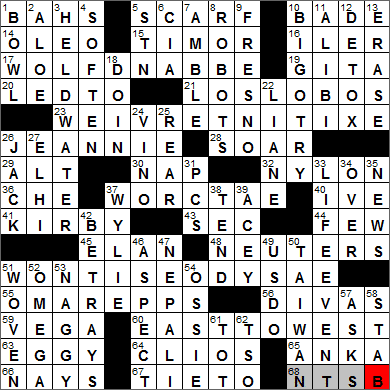 CROSSWORD SETTER: Julian Lim
THEME: Change in Direction … each of the themed answers is written backwards, from EAST TO WEST, and each starts with E for east and ends with W for west:

Today’s Wiki-est, Amazonian Googlies
Across
1. “Humbug” preceders : BAHS
The classic 1843 novella “A Christmas Carol” by Charles Dickens has left us with a few famous phrases and words. Firstly, it led to the popular use of “Merry Christmas”, and secondly it gave us the word “scrooge” meaning a miserly person. And thirdly, everyone knows that the character Scrooge was fond of using the now famous line “Bah! Humbug!”.

14. Polyunsaturated fat source : OLEO
Emperor Louis Napoleon III of France announced a competition to develop a substitute for butter, a substitute that would be more accessible to the lower classes and more practical for the armed forces. In 1869, a French chemist called Hippolyte Mege-Mouries came up with something that he called oleomargarine, which was eventually manufactured under the trade name “margarine”. The name “oleomargarine” also gives us our generic term “oleo”.

15. ___-Leste (U.N. member since 2002) : TIMOR
Timor is an island in Maritime Southeast Asia. The island is politically divided into West Timor, belonging to Indonesia, and the independent state of East Timor (aka “Timor-Leste”). The name “Timor” comes from a Malay word for “east”, and is used as Timor lies at the eastern end of the Lesser Sunda Islands.

16. “The Sopranos” co-star : ILER
The actor Robert Iler’s most famous role was A.J., son of mob leader Tony Soprano in HBO’s “The Sopranos”. Apparently Iler’s screen persona has spilled over into his personal life, as he was arrested for armed robbery of two tourists in 2001 (and pleaded guilty to a lesser charge).

19. Bhagavad ___ (Hindu text) : GITA
The Bhagavad Gita is a Hindu scripture, the title of which translates as “The Song of the Bhagavan”.

21. “La Bamba” performers : LOS LOBOS
Los Lobos are an American Chicano rock band, who released their first LP in 1978 and are still going strong today. The band’s name “Los Lobos” translates from Spanish as “The Wolves”.

26. Barbara Eden title role : JEANNIE
Back in 1964, the second most watched show on American television was ABC’s “Bewitched”. Sidney Sheldon was tasked with the job of creating a rival sitcom and he came up with “I Dream of Jeannie”, which first aired in 1965. The censors had a big say in how the story developed. For starters, Jeannie’s skimpy costume was permitted provided Barbara Eden didn’t show off her navel on the screen. Also, Jeannie was only allowed to live with an unmarried man as long as the story made it clear that she slept in a bottle.

30. Something Garfield often takes : NAP
“Garfield” is a comic strip drawn by Jim Davis since 1978. Garfield is an orange tabby cat. Davis named his hero Garfield after his own grandfather.

36. Popular dorm poster subject : CHE
Ernesto “Che” Guevara was born in Argentina, and in 1948 he started to study medicine at the University of Buenos Aires. While at school he satisfied his need to “see the world” by taking two long journeys around South America, the story of which are told in Guevara’s memoir later published as “The Motorcycle Diaries”. While travelling, Guevara was moved by the plight of the people he saw and their working conditions and what he viewed as capitalistic exploitation. In Mexico City he met brothers Raul and Fidel Castro and was persuaded to join their cause, the overthrow of the US-backed government in Cuba. He rose to second-in-command among the Cuban insurgents, and when Castro came to power Guevara was influential in repelling the Bay of Pigs Invasion and bringing Soviet nuclear missiles to the island. Guevara left Cuba in 1965 to continue his work as a revolutionary. He was captured by Bolivian forces in 1967, and was executed. Fidel Castro led the public mourning of Guevara’s death, and soon the revolutionary was an icon for many left-wing movements around the world.

37. Take one’s licks, in a way : EAT CROW
The phrase “eat crow”, an alternative to “eat humble pie” perhaps refers to the fact that cooked crow may be edible, but is not a great food choice.

43. Triple ___ : SEC
Triple sec is liqueur made from the dried peels of bitter and sweet oranges. I tend to use it in cocktails calling for Grand Marnier or Cointreau, as it is a cheaper alternative and tastes very similar …

45. Passion : ELAN
Our word “élan” was imported from French, in which language the word has a similar meaning to ours i.e “style” or “flair”.

55. “House” actor for the show’s entire run : OMAR EPPS
Omar Epps is the actor who played Eric Foreman on the excellent television series “House”. Prior to playing Dr. Foreman, Epps had a recurring role playing Dr. Dennis Grant on “ER”. And, in another link to the world of medicine, Epps was born in Savannah, Georgia to single mom, Dr. Bonnie Epps.

56. Lady Gaga and others : DIVAS
“Diva” comes to us from Latin via Italian. “Diva” is the feminine form of “divus” meaning “divine one”. The word is used in Italy to mean “goddess” or “fine lady”, and especially is applied to the prima donna in an opera. We often use the term to describe a singer with a big ego.

Lady Gaga is the stage name of singer Stefani Germanotta from New York City. I’ve seen Lady Gaga interviewed on television a few times, and she sure is “unique”. Her music is of course out of my league, but she does know how to put on a show.

63. Like crème brûlée : EGGY
Crème brûlée is a classic French dessert consisting of a rich custard topped with a crusty layer of caramelized sugar. The name “crème brûlée” translates from French as “burnt cream”.

64. Some campaigns win them : CLIOS
The Clio Awards are the Oscars of the advertising world and are named after Clio, the Greek Muse of History. Clio was also the recorder of great deeds, the proclaimer and celebrator of great accomplishments and a source of inspiration and genius. The Clio Awards were first presented in 1959.

65. “You Are My Destiny” singer : ANKA
Canadian-born Paul Anka’s big hit was in 1957, the song entitled “Diana”. Anka was the subject of a much-lauded documentary film in 1962 called “Lonely Boy”.

68. Accident investigator, for short : NTSB
The National Transportation Safety Board (NTSB) is responsible for the investigation of major accidents involving transportation. Included in this broad definition is the transportation of fluids in pipelines. The organization is independent in that it has no ties to other government agencies or departments so that its investigations can be viewed as “impartial”. The NTSB also earns a little money for the US as it hires out its investigation teams to countries who don’t have the necessary resources available on their own soil.

Down
2. Conditioner additive : ALOE
Aloe vera has a number of alternate names that are descriptive of its efficacy as a medicine. These include the First Aid plant, Wand of Heaven, Silent Healer and Miracle Plant.

6. Possible coup instigator, for short : CIA
The Central Intelligence Agency (CIA) is the successor to the Office of Strategic Services (OSS) formed during WWII. The CIA was chartered by the National Security Act of 1947.

8. Men of steel? : ROBOTS
“R.U.R.” is a play written in Czech by Karel Capek, first produced in 1921. “R.U.R.” is a science fiction work and is remembered in part for introducing the world to the word “robot”. The words “automaton” and “android” were already in use, but Capek gave us “robot” from the original Czech “robota” meaning “forced labor”.

9. San Joaquin Valley city : FRESNO
Fresno is the largest inland city in the whole state of California. The city was named for the many ash trees that lined the San Joaquin River, as “fresno” is the Spanish for “ash tree”.

24. Trattoria menu heading : VINO
A trattoria is an Italian restaurant. In Italian, a “trattore” is the keeper of an eating house.

26. With 41-Across, co-creator of Captain America and the Hulk : JACK
(41A. See 26-Down : KIRBY)
As writers for the comic book industry, Jack Kirby and Stan Lee worked together a lot throughout the 1960s. The Kirby-Lee team created such icons as the Fantastic Four, the X-Men and the Hulk.

27. Pre-coll., in education : ELHI
“Elhi” is an informal word used to describe anything related to schooling from grades 1 through 12, i.e. elementary through high school.

37. Poet Elinor : WYLIE
Elinor Wylie was an American poet and novelist who was active in the twenties and thirties.

39. ___-deucey : ACEY
Acey-deucy is a fast-played variant of backgammon. Apparently the game has been a favorite with members of the armed forces since the days of WWI.

47. Many a Sherpa : NEPALI
In the Tibetan language, Sherpa means “eastern people” (sher = east, pa = people). Sherpas are an ethnic group from Nepal, but the name is also used for the local guides who assist mountaineers in the Himalayas, and particularly on Mount Everest.

In William Shakespeare’s “The Merchant of Venice”, Portia is the formidable heroine who takes on the guise of a male lawyer and calls herself “Balthasar”. Portia does this to save the life of Antonio, the play’s title character. Portia makes a famous speech that gives us an oft-quoted phrase, “the quality of mercy”:

The quality of mercy is not strain’d,
It droppeth as the gentle rain from heaven
Upon the place beneath: it is twice blest;
It blesseth him that gives and him that takes…

52. Movado competitor : OMEGA
Omega is a manufacturer of high-end watches based in Switzerland. An Omega watch was the first portable timepiece to make it to the moon.

Movado is a manufacturer of upscale watches in Switzerland. The company name is an Esperanto word, meaning “always in motion”.

62. General on a Chinese menu : TSO
General Tso’s chicken is an American creation, often found on the menu of a Chinese restaurant. The name General Tso may be a reference to General Zuo Zongtang of the Qing Dynasty, but there is no clear link.