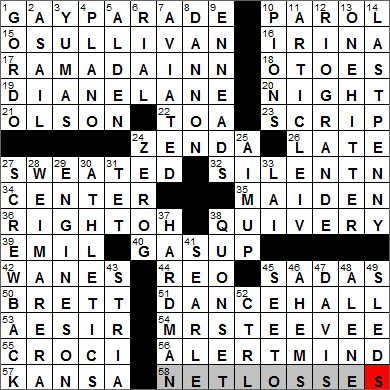 10. Given orally, at law : PAROL
In the law, a statement described as parol is given orally as opposed to in written form.

15. Maureen of “Tarzan the Ape Man” : O’SULLIVAN
Maureen O’Sullivan was a Hollywood actress from Ireland, best known for playing Jane in the “Tarzan” movies opposite Johnny Weissmuller. O’Sullivan was married to movie director John Farrow. The couple had seven children, including the actress Mia Farrow.

“Tarzan” is the title character in the series of books created by Edgar Rice Burroughs. The line “Me Tarzan, you Jane” never appeared in the books, and indeed doesn’t even figure in the movies. Apparently Johnny Weissmuller (who played Tarzan in the thrities and forties) saw Maureen O’Sullivan (“Jane”, to Weissmuller’s “Tarzan”) struggling with a suitcase in the parking lot during filming. He grabbed the bag from her, jokingly saying “Me Tarzan, you Jane”, and people have been quoting those words ever since.

16. Russian princess who was Nicholas II’s only niece : IRINA
Princess Irina Alexandrovna was the sole niece of Tsar Nicholas II of Russia. Irina was married to Prince Felix Yussupov. Yussupov was one of the men who murdered the mad monk Grigori Rasputin, who had such a strong influence over Nicholas II’s wife Alexandra.

17. One of a chain owned by Wyndham : RAMADA INN
The Ramada Inn hotel chain takes its name from the Spanish word for a shady resting place. A ramada is a shelter with a roof and no walls, mainly found in the American Southwest. Nowadays a ramada can be temporary or permanent, but originally ramadas were makeshift shelters constructed by aboriginal Indians from branches or bushes.

18. Platte River natives : OTOES
The Otoe (also Oto) Native American tribe originated in the Great Lakes region as part of the Winnebago or Siouan tribes. The group that would become the Otoe broke away from the Winnebago and migrated southwestwards ending up in the Great Plains. In the plains the Otoe adopted a semi-nomadic lifestyle dependent on the horse, with the American bison becoming central to their diet.

The Platte River used to be called the Nebrakier, which is an Oto word meaning “flat river”. For a while it was also called the River Plate as “plate” is the French word “flat”. Later this became “Platte”, the phonetic spelling of the French “plate”.

19. “Unfaithful” Oscar nominee : DIANE LANE
Diane Lane is a beautiful American film actress, born and raised in New York City. Not so long ago I saw Lane with Richard Gere in “Nights in Rodanthe” (a movie that I recommend). But my absolute favorite movie of hers is “Under the Tuscan Sun” based on the memoir of the same name by Frances Mayes (a writer from San Francisco). It’s a lovely romantic story, not without humor, set in the gorgeous Tuscan landscape.

“Unfaithful” is a 2002 drama film with leads played by Richard Gere and Diane Lane. The Hollywood movie is a remake of a French film called “La Femme infidèle” (The Unfaithful Wife).

23. Receipt to redeem a credit : SCRIP
Scrip isn’t legal tender, but operates just like currency in specific applications. It is in effect a form of credit. Originally the word “scrip” was used for a certificate giving one the right to receive something, often shares of a stock. “Scrip” is probably short for (sub)script(ion) receipt.

24. Place of imprisonment in book and film : ZENDA
The 1937 film “The Prisoner of Zenda” is based on a novel of the same name written by Anthony Hope and first published in 1894. Apparently the movie was a difficult shoot for director John Cromwell. He had trouble with Ronald Colman who really didn’t known his lines well, and co-stars Douglas Fairbanks Jr. and David Niven were always out on the town and turning up for work “under the weather”.

26. With 20-Across, Conan’s domain : LATE
(20. See 26-Across : NIGHT)
Before Conan O’Brien came to fame as a late night talk show host, he was a writer. O’Brien wrote for both “Saturday Night Live” and “The Simpsons”.

34. One who snaps : CENTER
In American football, it’s the center who snaps the ball.

39. Pianist Gilels : EMIL
Emil Gilels was a pianist from the old Soviet Union, born in Odessa (now part of Ukraine). Gilels was one of the first musicians allowed to perform concerts outside of the Eastern Bloc. His debut appearance in Philadelphia with Eugene Ormandy was a resounding success.

44. Maxwell rival : REO
Maxwell Motor Company made automobiles from 1904 to 1925, first headquartered in Tarrytown, New York. Maxwell ended up in Detroit, and there became one of the top three US car manufacturers in the country, along with Buick and Ford. In 1921, Walter P. Chrysler took a controlling interest in Maxwell, and a few years later the Maxwell assets were absorbed into the Chrysler Corporation.

The REO Motor Company was founded by Ransom E. Olds (hence the name REO). The company made cars, trucks and buses, and was in business from 1905 to 1975 in Lansing, Michigan.

50. Butler who played Grace Kelly : BRETT
Brett Butler is an actress and comedian. Butler’s best known role was as Grace Kelly in the sitcom “Grace Under Fire”. Sadly, Butler was asked to leave the show when she became unreliable as a result of substance abuse.

53. Thor’s group : AESIR
Aesir is sometimes used as the collective noun for the Norse gods.

In Norse mythology, Odin was the chief of the gods. Odin’s wife Frigg was the queen of Asgard whose name gave us our English term “Friday” (via Anglo-Saxon). Odin’s son was Thor, and his name gave us the term “Thursday”.

54. She told Willy Wonka “Loompaland? There’s no such place” : MRS TEEVEE
In the Roald Dahl book “Charlie and the Chocolate Factory”, Mrs. Teevee was the mother of young Mike Teevee. Mike is a boy who does little else but watch television. A reader of this blog pointed out that the family name “Teevee” was actually spelled “Teevea” in the original book. A little research shows that this was changed to “Teevee” for the 1971 musical film, maybe to emphasise the link with “TV”, short for “television”.

57. American tribe that lent its name to a state : KANSA
The states of Arkansas and Kansas are both named after the Kansa tribe of Native Americans that was closely associated with the Sioux tribes of the Great Plains.

Down
1. Monkey launched into space in 1958 : GORDO
Gordo was a squirrel monkey used by NASA in its space program. Gordo was launched into space in 1958 and travelled over 1500 miles in a 15-minute flight, 8 minutes of which were spent weightless. Gordo’s capsule re-entered the atmosphere at over 10,000 miles per hour, but the parachute failed to open. The capsule went into the South Atlantic and was never recovered.

2. Repeated cry from Mercutio in “Romeo and Juliet” : A SAIL!
In William Shakespeare’s “Romeo and Juliet”, Mercutio utters the words “A sail, a sail!”. He isn’t referring to a boat, but rather to a nurse who enters wearing a white smock.

5. Mayflower man : ALDEN
John Alden is said to have been the first person to disembark from the Mayflower and to have set foot on Plymouth Rock in 1620. Alden himself was not a Pilgrim as such, and was a carpenter working on the Mayflower before it sailed. He apparently decided to travel with the ship at the last minute, perhaps in pursuit of the passenger who would become his wife, Priscilla Mullens. Alden ended up in a love triangle with Priscilla and Captain Miles Standish, a relationship which is recounted in the Longfellow poem “The Courtship of Miles Standish”. John and Priscilla were the parents of a son, John Alden, who was later to be accused during the Salem witch trials.

8. Activia maker : DANNON
Danone is a French company that sells a wide range of food products, as well as bottled water. Here in the US Danone sells under the brand name “Dannon”. Examples of Danone products are Evian water and Activia yogurt.

9. Standard sudoku groupings, e.g. : ENNEADS
Ennead is the Greek word for “the nine”.

“Sudoku” is a Japanese word meaning “single number”. No doubt many of you are fans. I know I am …

10. No-spin particles : PIONS
“Pion” is short for “pi meson”, and is the name given to a subatomic particle.

11. It includes the extradition clause : ARTICLE IV
Article IV of the US Constitution defines the duties of individual states to each other, and the duties of the federal government to the states. Article IV also allows for admission of new states and the changing of state boundaries.

12. It’s between Laredo and Nuevo Laredo : RIO GRANDE
Laredo is a border city in Texas, situated on the banks of the Rio Grande across the border from Nuevo Laredo in Mexico.

24. Feeling no physical attraction? : ZERO-G
The force of gravity that we all feel is referred to as “one G”. As gravity is a actually an accelerating force, acceleration is measured relative to that force of gravity. So, if we are sitting in a vehicle that accelerates at 3G, then we are experiencing a force that is three times that which we feel from the gravitational pull of the earth.

28. 1919-33, in German history : WEIMAR ERA
At the end of WWII, the imperial government of Germany was overthrown in the German Revolution of November 1918. Just under a year later, a new constitution was adopted by a national assembly in the city of Weimar. The resulting Weimar Republic lasted until German democracy collapsed in the early 1930s and the Nazi Party came to power.

33. Medieval love poem : LAI
In the mid-13th century a lay was a short song, a word that evolved from the Old French word “lai” meaning “song, lyric”.

37. Mae West reputedly said this “is good to find” : HARD MAN
Mae West was always pushing the envelope when it came to the “sexy” side of show business, even in her early days in Vaudeville. One of the first plays in which West starred on Broadway was called “Sex”, a work she penned herself. The show was a sell-out, but city officials had it raided and West found herself spending ten days in jail after being convicted of “corrupting the morals of youth”. She started in movies in 1932, already 38 years old. West used her experience writing plays to rewrite much of the material she was given, and so really she was totally responsible for her own success and on-screen appeal.

38. Military hut : QUONSET
Quonset huts are prefabricated galvanized steel structures, semicircular in cross section. The Quonset hut design is based on the British Nissen hut that was used during WWI. The hut takes its name from Quonset Point near Davisville, Rhode Island. It was there that the first Quonset huts were manufactured in 1941.

41. Aspartame developer : SEARLE
The artificial sweetener called aspartame was discovered by a chemist working for Searle in 1965, but it took 15 years for the company to be granted approval for its sale. I wonder why …???

43. Tiny groove : STRIA
A stria is a linear mark or groove on a surface, often one of a series of parallel lines.

46. Sounds that make frogs disappear? : AHEMS
An “ahem” might be a clearing of the throat, getting rid of a frog in the throat.

47. “Jezebel” star : DAVIS
“Jezebel” is a movie starring Bette Davis and Henry Fonda released in 1938. Some say that Davis was offered the part in “Jezebel” as compensation for losing out to Vivien Leigh for the role of Scarlett O’Hara in “Gone with the Wind”.

48. Coeur d’___ : ALENE
The city of Coeur d’Alene, Idaho is named for the Coeur d’Alene People, Native Americans who lived in the area when it was first explored by French Canadian fur traders. “Coeur d’Alene” translates from French as “heart of an awl”. The Native American people were given this name as they were perceived as shrewd traders by their Canadian counterparts.

52. ___-C : CTRL
The computer command Control-C is often used as a shortcut to copy text or perhaps an image onto the clipboard.