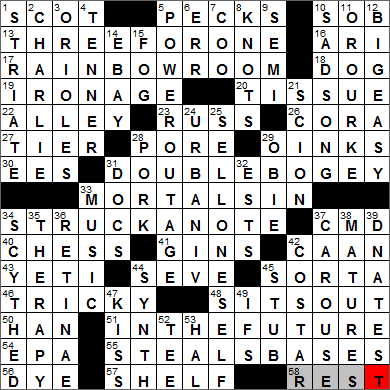 Today’s Wiki-est, Amazonian Googlies
Across
1. Automaker David Dunbar Buick, by birth : SCOT
David Dunbar Buick was an inventor working in Detroit, Michigan who founded the Buick Motor Company in 1903. Buick sold his interest in Buick Motors just three years later. He passed away in 1929, practically penniless. Still, over 30 million vehicles have been built that bore the Buick name.

5. Apple quantities : PECKS
A peck is a unit of dry volume, equivalent to two gallons. Four pecks then make up a bushel.

16. Chase Field team, on scoreboards : ARI
The Arizona Diamondbacks joined Major League Baseball’s National League in 1998. By winning the World Series in 2001, the Diamondbacks became the fastest expansion team to do so in Major League history.

17. Former New York City attraction with a revolving dance floor : RAINBOW ROOM
The Rainbow Room was opened in 1934 as an upscale supper club. Located on the 65th floor of the GE Building in New York City’s Rockefeller Center, the restaurant served mainly fine Italian cuisine and the nightclub featured a revolving dance floor. The economic decline in 2008 led to the Rainbow Room shutting down in 2009.

19. Tool time? : IRON AGE
Ancient societies can be classified by the “three-age system”, which depends on the prevalence of materials used to make tools. The three ages are:

22. It has pins at one end : ALLEY
Bowling has been around for an awfully long time. The oldest known reference to the game is in Egypt, where pins and balls were found in an ancient tomb that is over 5,000 years old. The first form of the game to come to America was nine-pin bowling, which had been very popular in Europe for centuries. In 1841 in Connecticut, nine-pin bowling was banned due to its association with gambling. Supposedly, an additional pin was added to get around the ban, and ten-pin bowling was born.

23. Football Hall-of-Famer Grimm : RUSS
Russ Grimm is the assistant head coach for the Arizona Cardinals. Grimm played as a guard for eleven seasons with the Washington Redskins.

26. “The Last of the Mohicans” girl : CORA
James Fenimore Cooper’s most famous works are the romantic novel “The Last of the Mohicans” and the collection of historical novels known as the “Leatherstocking Tales” featuring the hero Natty Bumppo. James Fenimore was the son of William Cooper, a US Congressman. The Cooper family lived in Cooperstown, New York, a community actually founded by James’s father William Cooper.

28. Pumice feature : PORE
Pumice is volcanic rock that is formed by lava cooling, but with bubbles in it due to water and carbon dioxide frothing out of the lava as it cools. Because of the frothy structure, pumice is relatively light and is a great thermal insulator. As such, it is used in construction to make insulating breeze blocks.

31. +2 : DOUBLE BOGEY
The term “Bogey” originated at the Great Yarmouth Golf Club in England in 1890, and was used to indicate a total round that was one over par (and not one over par on a particular hole, as it is today). The name Bogey came from a music hall song of the time “Here Comes the Bogey Man”. In the following years it became popular for players trying to stay at par to be “playing against Colonel Bogey”. Then, during WWI, the marching tune “Colonel Bogey” was written and named after the golfing term. If you don’t recognize the name of the tune, it’s the one that’s whistled by the soldiers marching in the great movie “The Bridge on the River Kwai”.

40. Game with forks and pins : CHESS
In the game of chess, a fork is when a piece attacks two opposing pieces at the same time. The end result is the opponent usually can only save one piece and must lose the other. A pin is when a piece cannot move because doing so would expose a more valuable piece to capture.

41. Goes out, in a card game : GINS
Gin rummy is a variant of the slower game of standard rummy and was introduced in 1909 by one Elwood Baker and his son.

42. James of “Elf” : CAAN
James Caan is an actor from the Bronx in New York City. Caan is noted for his appearances in some very big movies such as “The Godfather”, “Misery”, “A Bridge Too Far”, “Rollerball” and more recently “Elf”. Caan is quite the sportsman. He plays golf with an 8 handicap, and is a 6-Dan Black Belt Master of Gosoku Karate.

43. Giant of legend : YETI
A yeti is a beast of legend, also called an abominable snowman. “Yeti” is a Tibetan term, and the beast is fabled to live in the Himalayan regions of Nepal and Tibet. Our equivalent legend in North America is that of Bigfoot, also known as Sasquatch. The study of animals whose existence have not yet been substantiated is called cryptozoology.

44. ___ Trophy (golf tourney) : SEVE
The Seve Trophy is a golf tournament held every two years between teams from Great Britain & Ireland and Continental Europe. The tournament is named for the late great golfer from Spain, Seve Ballesteros.

50. Dynasty after the Qin : HAN
The Han Dynasty was the second imperial dynasty of China and lasted from 206 BC to 220 AD. It came after the Qin Dynasty, and before the Three Kingdoms.

54. Abbr. in auto ads : EPA
The Environmental Protection Agency (EPA) was set up during the Nixon administration and began operation at the end of 1970.

58. Staff sign : REST
On a musical staff, there can be a symbol indicating a rest, an interval of silence in a piece of music.

Frank Robinson is a former baseball player who played for the Cincinnati Reds and the Baltimore Orioles. For the last two years of his playing career, Robinson played for and also managed the Cleveland Indians. That made him the first African American to serve as manager in the history of Major League Baseball.

4. Sawbuck : TENNER
“Sawbuck” is slang for a ten dollar bill. The term was applied to the bill as the Roman numeral X (ten) resembles the end of sawhorse.

7. Cote call : COO
The Old English word “cote” was used for a small house. Our modern word “cottage” comes from “cote”, as does “cote”, the word for a small shelter on a farm for sheep or birds.

8. Speed units : KNOTS
A knot is a unit of speed equal to one nautical mile per hour. Traditionally a vessel’s speed was determined by using a “chip log”. A chip log is made up of a wooden board attached to a line wrapped around a reel. The line (called a “log-line”) had knots tied in it at uniform spacings. To determine the vessels speed the board was thrown overboard and the line allowed to unroll. The speed was then the “number of knots” paid out in a fixed time interval.

21. Offshoot : SCION
Scion comes from the old French word “sion” or “cion”, meaning “a shoot or a twig”. In botanical terms today, a scion is used in grafting two compatible plants together. In grafting, one plant is selected for its root system (the “rootstock”), and the other plant is selected for its stems, leaves and fruit (the “scion”). The term scion migrated naturally into the world of family history. A scion is simply a descendant, a son or a daughter and therefore a branching point in the family tree.

24. Mid 13th-century pope : URBAN IV
Pope Urban IV was the leader of the Roman Catholic church from 1261 to 1264. Urban IV was one of the few popes who had not been a cardinal before being elected to the higher office.

28. Bill add-ons : PORK
Pork barrel politics have been around for a long time. The term originated in 1863 in a story by Edward Everett Hale called “The Children of the Public”. Hale used “pork barrel” in a positive way, describing any public spending by government for the benefit of citizens. By the 1870s the term “pork” had negative connotations, with references in the press to “pork barrel bills” in Congress. Nowadays “pork” really applies to any government project designed to benefit a relatively small group of citizens (usually potential voters for a particular politician) with the bill being paid by the citizenry as a whole.

29. Drama honor : OBIE
The Obies are the “Off-Broadway Theater Awards”. The Obies are presented annually and the recipients are chosen by “The Village Voice” newspaper.

36. Image receivers : RETINAE
The retina is the tissue that lines the inside of the eye, the tissue that is light-sensitive. There are (mainly) two types of cell in the retina that are sensitive to light, called rods and cones. Rods are cells that best function in very dim light and only provide black-and-white vision. Cones on the other hand function in brighter light and can perceive color.

39. Fatherhood confirmer, maybe : DNA TEST
I’ve always been fascinated by the fact that the DNA of living things is so very similar across different species. Human DNA is almost exactly the same for every individual (to the degree of 99.9%). However, those small differences are sufficient to distinguish one individual from another, and to determine whether or not individuals are close family relations.

44. ___-pop : SYNTH
Synth-pop is a musical genre that emerged in the eighties and that heavily features the synthesizer as a musical instrument. The list of performers that fall into the synth-pop genre includes Ultravox, the Human League, Duran Duran and Spandau Ballet.

52. Top-Flite holder : TEE
The Top-Flite brand is currently owned by Calloway, picked up when Spalding’s golf division went bankrupt in 2003.

53. Cartoonist Foster : HAL
The cartoonist Hal Foster is best remembered as the creator of the “Prince Valiant” comic strip.