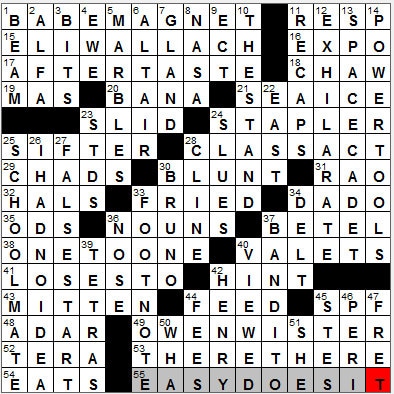 
Today’s Wiki-est, Amazonian Googlies
1. Stud, say : BABE MAGNET
No experience with this one!

11. Court defendant: Abbr. : RESP
A respondent (resp.) in a legal proceeding is the defendant.

15. He played Don Altobello in “The Godfather Part III” : ELI WALLACH
Eli Wallach has been appearing consistently and making great performances on the big and small screens since the 1950s. His most famous role was probably as “the ugly” in “The Good, the Bad and the Ugly”. More recently he gave a very strong performance in 2006’s “The Holiday”.

20. Eric of “Funny People,” 2009 : BANA
Eric Bana is an Australian actor who enjoyed a successful career in his home country before breaking into Hollywood playing an American Delta Force sergeant in “Black Hawk Down”. A couple of years later he played the lead in Ang Lee’s 2003 movie “The Hulk”, the role of Dr Bruce Banner. More recently he played the Romulan villain Nero, in the 2009 “Star Trek” movie.

21. It’s gradually shrinking in the Arctic : SEA ICE
Sea ice is formed by the freezing of seawater. Because of the salinity of seawater, it freezes at -1.8C. Note that icebergs are not sea ice, because they are formed from frozen show (freshwater) that has broken away and fallen into the ocean.

25. Kitchen dusting aid : SIFTER
A sifter might be used to dust sugar onto the top of a cake.

29. They might be left hanging : CHADS
We are all familiar with “hanging chads” after the famous Florida election recounts of 2000. A chad is any piece of paper punched out from a larger sheet. So, those round bits of paper we’ve all dropped over the floor when emptying a hole punch, they’re chads.

31. 1990s Indian P.M. : RAO
P. V. Narasimha Rao was Prime Minister of India from 1991 to 1996. Rao is seen by most as the leader who transformed his country’s economy into the market-driven engine that it is today.

32. “Youth With a Skull” painter : HALS
Frans Hals was a painter from the Dutch Golden Age, born in Antwerp but who lived and worked in Haarlem. Hals is best known for his portraits, the most famous of which is probably “The Laughing Cavalier”.

The painting by Frans Hals called “Youth With a Skull” depicts Shakespeare’s Hamlet holding the skull of his deceased court jester, Yorick. “Alas, poor Yorick! I knew him, Horatio …”

34. Carpenter’s groove : DADO
In the world of joinery, a dado is a slot cut into a piece of wood, across the grain. On the other hand, a “groove” is a slot that is cut with the grain.

35. Some E.M.T. cases : ODS
An emergency medical technician (EMT) might have to deal with an overdose (OD).

37. Kind of nut : BETEL
The betel nut is something that is chewed, especially in parts of Asia. “Betel nut” is a bit of misnomer, as the nut in question is actually an Areca nut from the Areca palm. For chewing, the Areca nut is wrapped in betel leaves, with the whole thing called a “betel nut”.

45. Ray blockage no. : SPF
In theory, the Sun Protection Factor (SPF) is a calibrated measure of the effectiveness of a sunscreen in protecting the skin from harmful UV rays. The idea is that if you wear a lotion with say SPF 20, then it will take 20 times as much UV radiation to cause the skin to burn if using lotion, than without it. I say, just stay out of the sun …

48. Month whose zodiac sign is a fish : ADAR
Adar is a month in the Hebrew calendar.

49. “Lady Baltimore” novelist, 1906 : OWEN WISTER
The novelist Owen Wister earned himself the nickname of “father” of western fiction. He was a friend of President Theodore Roosevelt and spent a lot time with him out west. Wister’s most famous book is “The Virginian” which was published in 1902. “The Virginian” is dedicated to Theodore Roosevelt, and is regarded as the world’s first cowboy novel.

52. Prefix with 3-Down : TERA-
The prefix tera- signifies a trillion and comes from the Greek word “teras” meaning “monster”.

3. Computing 0s and 1s : BITS
In the world of computers, a “bit” is the basic unit of information. It has a value of 0 or 1. A “byte” is a small collection of bits (usually 8) and is the number of bits needed to uniquely identify a character of text.

5. Sense, slangily : MARBLES
To have one’s “marbles” is to have one’s mental faculties, to have common sense. The term is American slang dating back to the 1920s.

6. Aquila’s brightest star : ALTAIR
Altair is the brightest star in the constellation Aquila (the Eagle). Altair is also one of the three vertices of the Summer Triangle, the others being Deneb and Vega.

8. Mariner’s grp. : NASA
The Soviet Union launched the Sputnik satellite towards the end of 1957, a development that shocked the establishment in the US. Within months, President Eisenhower made his move, creating the Advanced Research Projects Agency (ARPA, now DARPA) and the National Aeronautics and Space Administration (NASA).

28. “Faded Love” singer, 1963 : CLINE
Patsy Cline was a country music singer who managed to cross over into the world of pop music where she enjoyed great success. Cline is one of a long list of musical legends who died in plane crashes. Cline was 30 years old when she was killed in 1963 in a Piper Comanche plane piloted by her manager, Randy Hughes. Hughes and Cline decided to make that last flight despite warnings of inclement weather, and it was a severe storm that brought down the plane in a forest outside Camden, Tennessee.

34. Shoulder press target, briefly : DELT
The deltoid muscle is actually a group of muscles, the ones that cover the shoulder and create the roundness under the skin. The deltoid is triangular in shape resembling the Greek letter delta, hence the name.

39. Colorful additions to tanks : TETRAS
The neon tetra is a freshwater fish, native to parts of South America. It is a very popular aquarium fish and millions are imported into the US every year. Almost all of the imported tetras are farm-raised in Asia and very few come from their native continent.

42. Name in seven Shakespeare titles : HENRY
The consensus seems to be that William Shakespeare wrote 38 plays in all. Seven of the plays are about kings called “Henry”:

46. Graceful fairy : PERI
In Persian mythology, peris are fairy-like creatures who are descended from fallen angels and so must do penance before entering paradise. Over time, peris came from being regarded as evil beings and were instead welcomed as benevolent spirits.

47. Part of a long neck : FRET
A fret is a metal strip embedded in the neck of a stringed instrument like a guitar. The fingers press on the frets, shortening the strings and hence changing the note played by the strings. The note increases by one semitone as the the fingers shorten each string by one fret.

51. “___ being Brand” (Cummings poem) : SHE
The American poet Edward Estlin Cummings was fond of ignoring accepted English syntax and punctuation in his poems. He also left some of his poems untitled so that they are known by just their first lines (e.g. “anyone lived in a pretty how town”). Because of the Cummings “style”, he was quite often referred to as e.e. cummings, with all the letters of his name written in lower case.