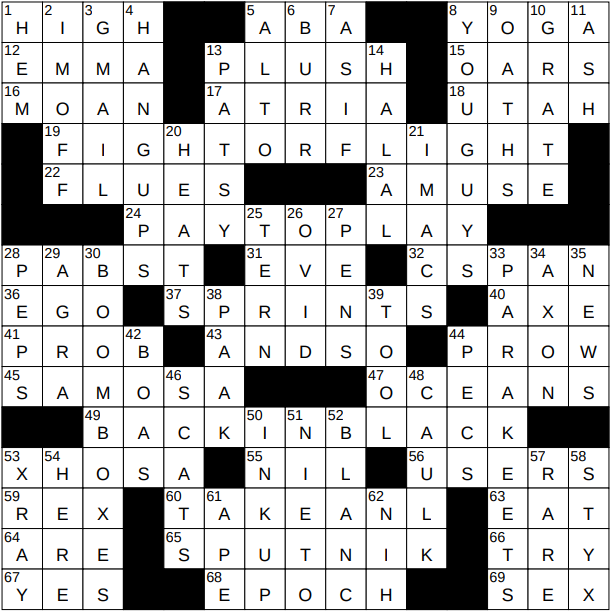 Themed answers each comprise three words, the third being the first after it has TAKEN A letter L:

The tree pose in yoga is more correctly known as “vriksasana”. It involves standing on one leg, with the other leg bent and the foot placed on the inner thigh of the straight leg. The hands are placed together and raised directly over the head.

Emma Watson is an English actress famous for playing Hermione Granger in the “Harry Potter” series of movies. Watson continued her education while pursuing her acting career and studied at Brown University in Providence, Rhode Island.

Bryce Canyon National Park truly is a beautiful part of America. The strange thing is that Bryce isn’t a canyon at all, but rather is a natural amphitheater created by erosion of sedimentary rocks that are part of the Paunsaugunt Plateau.

49 AC/DC album after “Highway to Hell” : BACK IN BLACK

“Back in Black” is a 1980 song by Australian heavy metal band AC/DC. The band members wrote the song as a tribute to AC/DC’s former singer Bon Scott, who died earlier that year at the age of 33.

The Xhosa are a Bantu people who live mainly in the southeast of South Africa. The Xhosa language is the second-most common in the country, after Zulu. Among the list of notable Xhosa people are former President Nelson Mandela and retired Anglican Bishop Desmond Tutu.

The Jurassic geologic period lasted from about 200 to 145 million years ago, following the Triassic and followed by the Cretaceous. Limestone strata from the period were first identified in the Jura Mountains in the Western Alps. It is this mountain range that gives us the name “Jurassic”.

2 Jaunty words upon departing : I’M OFF

3 App with an envelope logo : GMAIL

A phoenix is a fabulous bird of Greek mythology, which can also be found in the mythologies of Persia, Egypt and China. The phoenix is a fire spirit, which lives from 500 to 1000 years. At the end of its lifespan, it builds a nest for itself (a pyre) and self-ignites, burning itself and the nest, creating a pile of ashes. A young phoenix arises from the ashes and the cycle starts all over again.

“Metamorphoses” is a narrative poem by Roman poet Ovid that deals with a lofty subject. It describes the history of the world from creation until the “present day”, that is Ovid’s “present day”, the era of Julius Caesar. A lot of the storyline makes use of Greek mythology (rather than Roman).

Agra is a medieval city on the banks of the river Yamuna in India that was the capital of the Mughal Empire from 1556 to 1658. The city is home to three UNESCO World Heritage Sites:

A boombox is a portable music player with speakers that includes an AM/FM radio as well as a recording device (originally cassette tapes, and later compact discs). The first boombox was introduced by Philips in 1966 as a “Radiorecorder”, a portable device that could record radio broadcasts without the need to use external cables and microphones. Boomboxes became very popular with young people in urban areas. The practice of playing loud music using boomboxes in neighborhoods led to the devices being labeled as “ghetto blasters”.

Parakeets are a group of bird species that are small parrots. The most common type of parakeet that we see in pet stores is the budgerigar.

34 Part of a neural connection : AXON

46 Improvises during a jazz performance : SCATS

52 Noir’s counterpart in a game of les échecs : BLANC

58 River with a mythical ferryman : STYX