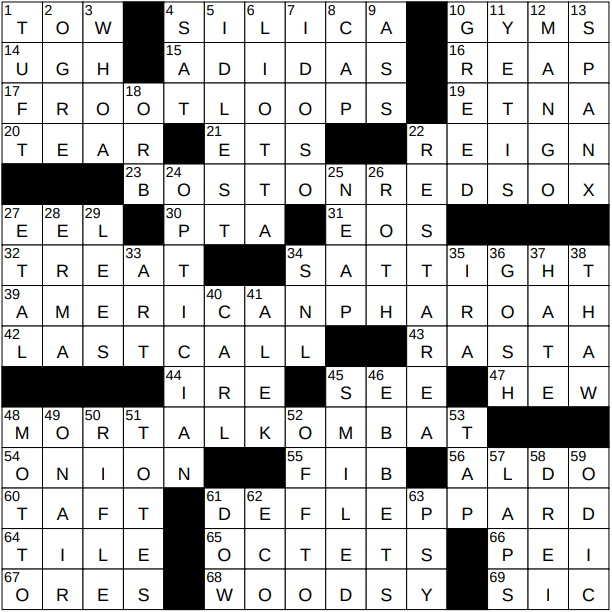 17 Breakfast cereal with a toucan mascot [69-Across!] : FROOT LOOPS

20 Cause of a mascara streak : TEAR

American Pharoah was the twelfth winner of the Triple Crown, achieving the feat in 2015. The horse’s name was inspired by that of his parents: Pioneerof the Nile (dam) and Yankee Gentleman (sire). And, as some kind blog readers have pointed out, there are some unexpected spellings in the names of horses. One might expect “American Pharoah” to be spelled “American Pharaoh”, and indeed “Pioneerof the Nile” to be written as “Pioneer of the Nile”. More challenges for us crossworders …

Bob Marley was the most widely-known reggae performer, with big hits such as “I Shot the Sheriff”, “No Woman, No Cry” and “One Love”. A little sadly perhaps, Marley’s best-selling album was released three years after he died. That album would be the “legendary” album called “Legend”.

Chinese-American architect I. M. Pei was raised in Shanghai. He moved to the US to study architecture at the University of Pennsylvania. Although he transferred soon after to MIT. The list of his designs includes the John F. Kennedy Library in Massachusetts, the Bank of China Tower in Hong Kong, and the celebrated glass-and-steel pyramid in the Louvre Museum in Paris.

Actor Ray Liotta was best known for playing Shoeless Joe Jackson in the movie “Field of Dreams” and Henry Hill in “Goodfellas”.

37 “It has caused a lot of problems in this world, but it has not solved one yet,” per Maya Angelou : HATE